The Men That Will Not Be Blamed For Nothing - Interview 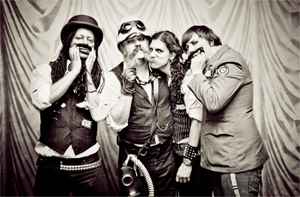 The Men That Will Not Be Blamed For Nothing are kind of like an underground super team of rascals and ragamuffins. The band features cult comedian Andrew O'Neill and ex Creaming Jesus singer Andy Heintz, and their loyal fanbase is ever growing.

With their latest double a-side single 'The Gin Song / Third Class Coffin', TMTWNBBFN have presented us with a fine slab of rough 'n' tumble alt rock, masked under humorous lyrics with surprising substance. Their shows are usually sell-out affairs with fans huddled in to see their favourite steampunk stalwarts.

Guitarist Marc Burrows gives us a little introduction to the band, their involvement with steampunk and what they have planned next.

CM: Please explain the name, it's rather long!
MARC: Don't blame us, blame Jack The Ripper. You'd have to find him first, obviously, but there're a lot of books that can help you there. The name of the band was taken from the graffiti left in Goulston Street the night of the 'Double Event', when the Ripper killed two victims. It's the only piece of tangible evidence in the case. "The Juwes are the men that will not be blamed for nothing" was written on a wall next to a piece of blood stained apron taken from one of the victims. Did the Ripper write it? What does it mean? These questions and more are answered on our next single 'the poor grammar and spelling of Jack The Ripper and other Tedious Theories' (To be confirmed).

CM: How did the band come together?
MARC: Andrew and Andy were living together and obsessed by Victoriana. At the same time, Andrew was touring a stand-up show about engineering and industry that focussed on the Victorian era a lot. They formed the band to be the opening act, and expanded it to a full punk band for the London shows. It turned out there was an audience of people who loved Victoriana and steampunk, but for whom no-one was making heavier, faster music. The rest is anachronistic history.

CM: Was it a deliberate decision to delve straight into the steampunk scene?
MARC: I think it's more that there was a ready-made audience for our stuff there, people who weren't going to question it or find the Victorian angle strange. We never wanted to just be a band of and for that audience (God knows there're enough bands who do that) but there was an instant fanbase just waiting for us there.

CM: Steampunk is quite a niche genre for music, is there a decent scene out there?
MARC: Err... no. Not at all. Steampunk isn't a genre of music. As a term it means too many different things. It's an aesthetic and a worldview than can be applied to music (mashing up the Victorian era with the future or present) but it can't define a sound. All the bands associated with it sound utterly different, and a lot of them are terrible; shove a bowler hat and some goggles on and BOOM you're a steampunk band regardless of what you sound like. The best bands are the ones that can play those niche steampunk events, but whose appeal goes way beyond them.

CM: Tell us about your single The Gin Song / Third Class Coffin - what is it all about?
MARC: It had been a year and a half since our last album, so we wanted to put something new out to remind people we're still around.  You get both sides of the band here - the bawdy and the serious.  'Third Class Coffin' is about the Victorian Necropolis Railway which would take corpses out of London to huge cemeteries in the country as the Parish graveyards were overflowing.  You could buy a first class ticket and have all your mourners in plush surroundings and get a proper funeral, a second class which was a bit less flash, or a third class ticket which meant the coffins were stacked up at the side of the platform until there was enough first and second class sales to make it worth the trip, then piled in. It kept the classes separate even in death. It's fascinating.

'The Gin Song' is our version of a drinking song, a celebration of the cheap liquor that kept the working man entertained through the bitter nights.

CM: With comedian Andrew O'Neill being in the band, do you get a lot of comedy fans coming to the shows as well?
MARC:  We do, especially as I'm a comic as well. Our shows are always a proper gathering-of-the-tribes. You get the top-hatted steampunks, goths, punks, metal-heads, comedy fans and people who wander off the street wondering what the fuss is about. We try and make sure we're serving those different audiences by putting on proper variety shows that have consistency but cover a lot of bases. Not Bruce Forsyth variety, but what Music Hall would have evolved into. So we have metal bands, comedians, historians and turns. It's cabaret but without the cliche Dresden decadence that word usually implies. With METAL BANDS.

CM: Some of your songs are like working class manifestos - give us an insight into the songwriting process.
MARC: With the lyrics, we very quickly realised we wanted to explore the grimy underbelly of the Victorian era. If you go to steampunk events, it's all people dressed as posh Lord Coggington McGoggles the Third. It's horrible. So our songs are critical of the British Empire (because it was bloody awful) and critical of the class system. We try and celebrate the scum and the filth and the working folk of the era.  The other side of it is the silliness which we're incapable of ignoring for long; two of us are comedians after all, although I think Andy's written the funniest lyrics and he's never done stand-up in his life (although we're trying to make him).

Musically, it's become very collaborative. Our early stuff, all of the first album really, was written by Andy and Andrew on their own and it's mostly just putting chords to the words. Since then it's become more musical - we usually start with a riff or progression and jam on it for a while, and that can come from any of us. Andy has tons of lyrics and has a brilliant sense of which to dig out for whatever we're working on. It always makes perfect sense when he opens his gob.

CM: Going forward, do you think you'll transcend your steampunk roots and explore new territory?
MARC: It's an interesting question because, if you're talking about steampunk as a scene, I think we moved away from it with our second album (in 2012). We still play those events and that fanbase means a lot to us, but we stopped playing to the gallery and widened it out.  If you're talking about being a Victorian themed project, I'm not sure. I don't think we feel the urge to move past it yet. Lyrically, it's a pretty big sandpit to play in, there's still plenty to write about and, musically, we're not restricted by it at all. We can do any kind of record we like. As for our look - well Kiss were s*** without make up, weren't they?

CM: Can we expect an album from you anytime soon?
MARC: We're taking our time - our second album was a huge step up from the first, and this one needs to be another big step up. Hopefully we'll have something out next year though.

CM: You've the chance to collaborate with one writer, one artist and one musician - who would they be and why?
MARC: Can I have William Shatner? He's all three, surely? Excellent poet and writer, who has made brilliant albums (I will fight you if you disagree).  I think he's an artist.

CM: For someone not au fait with your music or steampunk, which track would be the best place to start?
MARC: Our song 'Brunel' sums us up pretty well - punk rock and Victorian engineering. Although, saying that, taken together 'The Gin Song' and 'Third Class Coffin' paint a pretty good picture of where we're at today.