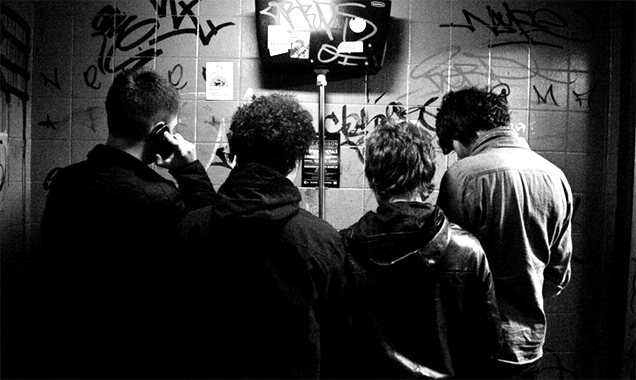 Interview With The Marivaux October 2014

The Marivaux grew up smack bang in the middle of the Manchester music scene which, love it or loathe it, has had a profound effect on band's not just in the UK but all over the world.

Staying true to their roots, their upcoming EP 'All In Good Time' celebrates good old-fashioned noise, with loud guitar, loud drums and slurred northern vocals spreading the message: "Just chill out and enjoy the ride".

They're currently touring the UK and Europe, and we managed to sit down and catch up with them in between shows.

Contactmusic: It would be remiss of us not to mention the band's name - The Marivaux. For anyone who's not read the play (or the press release for that matter) can you let us know how you came about choosing the name?
The Marivaux: Singer and guitarist (Phil and Matt) were sat in a scruffy Wetherspoons, found an encyclopedia and flipped to a random page. I think it may have landed on Cameltoe first so we're pretty glad we gave it a second chance. But it turned out that it was pretty relevant to our music as the guy Pierre De Marivaux was a French playwright who was one of the first to pen the thoughts of minor characters in plays... We're all minor characters, and these are our thoughts.

CM: Would you say that politics plays a part in your songwriting process?
TM: Not initially, but it's hard not to comment or have opinions on your own current and personal situation, a direct effect of society, circumstance and the systems put in place for (us) the people.

CM: What or who was it that first set you on the road to becoming musicians?
TM: I (Phil) was given a battered old acoustic with just two strings on, and my dad caught me at about age 11 with a kids karaoke mic in the sound hole, replicating Nirvana singles, without a tuner. I remember it sounding wicked, defo sounded shite. Anyway, my parents then sold their shoes, and souls evidently, to buy me an electric guitar and amp I quarantined myself with it for the next 10 years. We've been in bands all our lives, Rik and Matt made hearts and ears bleed, like me, before The Marivaux, and I know we all had experiences with music as young lads growing up. It's just like a moth to a light bulb, an insatiable escape from the dire and dim, and a chance to be and feel part of something greater than yourself. Ben was born playing maracas, so that's pretty unique.

CM: Do you think the history of Manchester's music scene inspires or holds back young musicians trying to make it in the Northern scene?
TM: Both. I've seen plenty of small victories and large defeats over the years, but the trend seems to be inspiration, followed by ambition, then dismay because of the ever surfacing disparity within the industry, then it's make or break. The best only last because they think it will be worth it and know they're good enough to commit everything, and not get discouraged along the way, which I can assure you is difficult.

CM: What makes your live shows different from what people hear on your releases?
TM: Improvisation, character, energy and a more exciting atmosphere, as if there wasn't enough eh?! Haha. No, but since we recorded our last batch of tracks we've matured as musicians and as people, and hope to capture more of what makes us 'The Marivaux' on our next recordings.

CM: What do you do when you're not touring or recording?
TM: We create, write, read. We all have slightly different tastes, and hobbies too outside of the band. For example Matty is a pretty bangin' producer, some of his recent Hip Hop beats are seriously groovy. We even started street gigging on the odd day off around the UK too to see what happens, and the reactions were great so we plan to do that in Europe too, at the end of October. We're actually quite private guys, reserved too, but that doesn't mean we don't party. We always make sure we party regularly.

CM: Does your EP, All In Good Time, have a theme?
TM: Patience truly is a virtue; resilience is a must. All In Good Time. Our original tracks also hold an aftertaste of self-realization and self-acceptance, albeit via the spiral staircase of self-destruction. The remixes we've included are awesome too, a couple of fruity cocktails added to a round of straight up potent and reliable Guinness, modernised songwriting with no daft frilly hats. Essentially Hops-Rock? God I should have been a journalist.

CM: Do you have any plans for a bigger release - is there an album in the pipeline and what can we expect?
TM: Yeah, well we plan to release EPs to see how people react, but we have new material written and are keen to record it all, to make the album next year. Big plans to be honest. possibly a Scandinavian tour. Need to get through our second European one first!

CM: Where can we see you play live?
TM: All In Good Time single launch at Night and Day Café in Manchester 24th November. Or if you're in Europe follow our facebook and twitter pages to see what city we are in, we just may be in yours!!