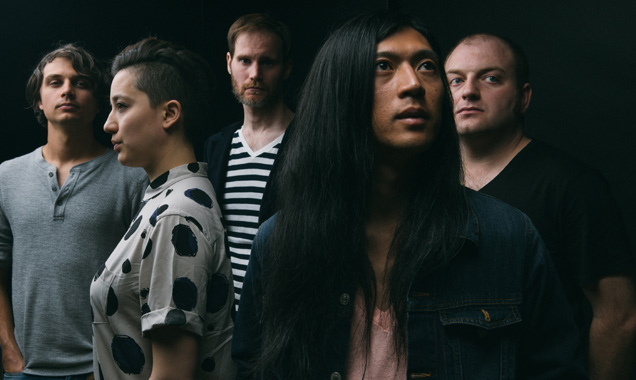 An Interview with The Jaguar Club

The Jaguar Club have returned with a new line-up and a new sound. Originally starting out as a trio, founding members William Popadic and Yoichiro Fujita have now been joined by Nadia Brittingham, Gavin Dunaway and Patrick Eager to create the full band sound you hear today. The Jaguar Club are oozing with 80s new wave vibes taken from their overflowing love of the likes of Johnny Marr and Morrisey.

Who are The Jaguar Club?
The Jaguar Club is: Will, lead singer who plays guitars/synths and has a large supply of crustacean themed boxer shorts; Yoi our bassist who sometimes sings and has really impressive hair; Nadia who plays synths, guitar and sometimes sings and can be accredited for giving Gavin the nickname "Dadvin"; Gavin, lead guitarist and also known as "Dadvin" due to his tendency to make terrible dad jokes; and Pat the drummer who is often topless, showcasing a giant tree tattoo, usually obscured by chest hair.

You're from New York but have a very British sound in some ways, which UK bands have been an influence on your sound?
There are more than a few anglophiles in the band, and therefore more than a few UK influences. But definitely the Smiths, Echo and the Bunnymen, Suede, Pulp, Ride.

You were sending each other songs online long before you starting making the latest EP, how did you keep a cohesive sound throughout this time?
The songs were somewhat skeletons when we sent them back and forth, with the structure mostly there, but sounds and parts as more ideas than anything final. During the few months  before recording, we spent a lot more time together in rehearsal bringing them to life. Gavin joined shortly before recording, and his guitar parts added a new energetic dynamic that really made the songs feel complete.

The EP 'Close' came out in March, what is the EP about?
Well, the name itself is kind of a double entendre. The last Medals album was called 'Long Distance', based on our having to travel between Boston and NYC to put together that collection of songs. The majority of that was written emailing versions back and forth, each of us adding parts to demos, which isn't the most intimate method of songwriting. We were also sans Pat, a drum machine band, so there was less of a "live energy to capture". So, logically enough, the new album was named 'Close' because with the addition of Pat and Gavin, we actually felt like a real band again and we think that dramatically changed the feel of the music. So, 'Close' in terms of proximity, but also a "close" in terms of the end of an era. That era being Medals, the mostly electronic three piece band.

Your video for 'Stringer' is out now, are there any themes behind the video or the track?
Well, the video is really the brainchild of our good friend Manny Nomikos who directed it. We shot it over a weekend in Long Island, running around by a campfire with a bottle of whiskey and a very large amount of Taco Bells. It was very cold, we were thankful for the fire as a narrative device. I think the video is about relinquishing responsibilities and day to day dullness, and embracing the joie de vivre! And driving around a muscle car with your best friends/bandmates. I suppose the song itself is about all of those things too, especially the part about driving a muscle car.

What's it like making music in NYC?
It's a pretty fun scene and a huge one at that, which makes it pretty competitive, at least more so than if we were in a smaller city with a more close-knit community. Perhaps we will all move to Beverly, Massachusetts where Will lives and really blow up that music scene. I'm sure Will would prefer it to driving down here all the time.

What have been your best and worst gigs and why?
From my experience, the worst gig we ever played was actually when we were in Medals and doing a week long tour that involved playing a show in Chicago to a mostly empty room and then driving overnight to Atlanta. I shouldn't complain too much, because I got the best leg of driving (the last one that allowed me to sleep the most and wake up in a Waffle House parking lot in Kentucky). So, needless to say, we were all pretty miserable and exhausted by the time we had to play Atlanta. It was a pretty well attended show, but very DIY. So these were the drum machine years and our "drums" sounded more like loud farting over the PA.

I wasn't in the Jaguar Club during its first formation, but I am going to speak for my 14-year-old self that the best gig the JC ever played was opening for Ash at Santo's Party House. Because, Ash!

What would you say are the hardest things about being in an independent band these days?
It's extremely expensive and feels thankless at times. But then we write a song and get really excited about it, or play a great show and hear some very nice feedback from our fans and it makes it all better.

What are your plans after the summer - any dates in the UK?
We are in the midst of putting together our very first UK tour, which at the moment will end with the new Rockaway Beach Festival in Bognor Regis in early October. Super excited to play that as there are some amazing headliners on that festival like Echo and the Bunnymen, Johnny Marr and Spiritualized.

If you could sum up the band in one sentence, what would that be?
This wheel's on fire, rolling down the road!