The i Hearts, Interview 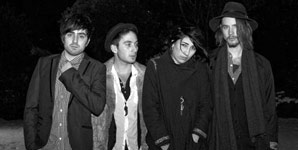 The I Hearts - Interview

Read our interview with The i Hearts

This year is going to be a good one for music. It seems that among the tidal wave of slickly produced, polished electro music on offer, proper rock and roll is making a comeback, and it not before time. New London four-piece The i Hearts are one of the bands leading the way. They've been touted as one of the hottest up and coming acts the capital has to offer and have played some huge gigs already, so Contactmusic.com were keen to see what all the fuss was about. We met up with the band, minus guitarist Chris Lucas (who was apparently partying in the Caribbean with Mick Jagger - very rock and roll) to chat about their difficult beginnings and their plans for the coming year.

Having met as children at Scouts of all places, vocalist/guitarist Cece Estrada and Drummer Dave Churchyard met again randomly years later and formed The i Hearts. 'We thought, "we'll be the next white stripes" - because I was just guitar and he was drums.we arranged a rehearsal and it started there' explains Cece. In between the two of them forming the band and their first rehearsal, Cece met Chris. 'I saw he had cowboy boots on and I was going through a big cowboy boots phase, so I kidnapped him outside!' Their first rehearsal proved that the random meeting was obviously meant to be; 'it instantly just f*cking clicked man, it was just instantly there.and next thing we know, we're f*cking playing at The Roundhouse' said Dave. Not your average first gig; most bands would be expecting to play some sh*tty pub to a crowd of three people, but through contacts from Cece's previous band, CC And The Spades, the band got to play the iconic venue with The Vulgarians and The XX, 'It was awesome, just awesome' Dave adds. And it must have gone down well, because the band also went on to headline The Scala.

It was after that gig that things changed. 'The band started disintegrating a little bit and people started drifting away from it.we weren't inspiring each other and it was a little bit tedious and boring' explains Cece. But instead of giving in to band politics and throwing in the towel, The i Hearts decided to re-invent themselves. With the addition of a bassist Andrew Manuel Misuraca, they also took on a new sound. 'They've never had a bassist before, so what I'm trying to do is to change that dynamic a little bit' explains Andrew. 'Before it had to be all in your face because it was just the guitar, vocals and drums.you couldn't really fill it out'. 'Yeah, the bass adds the sex!' says Cece, 'Now we are the new I hearts I feel we are a little bit darker and we're slowing down. Before, we had a constant punch non-stop, but now we're kind of skipping our feet like a boxer and then having a punch!'

With influences such as The Clash and The Black Crows, Bowie and The Beatles, The i Hearts describe their sound as 'rock and roll, but dirtier'. It's clear listening to their music and seeing them play they do have that dirty rock and roll vibe, but their songs also have great melodies and poppy hooks, they're very accessible. 'People think oh that's not rock and roll, that's not cool.f*ck it, people are too afraid of doing their own thing and I do believe we do have something new because we are mixing a bit of everything' says Cece. Her vocals certainly add another dimension to their sound. You wouldn't expect the front woman of a rock and roll band to cite Kate Bush, Jonie Mitchell and psychedelic female-fronted Californian quartet Warpaint among her influences. But Andrew describes it perfectly 'the sound's raw, dirty and loud but Cece's vocals smooth it all out'. Head over to their MySpace and listen to Lovelace Road and you'll see exactly what he means.

With a busy year ahead, the band's main priority is to record their debut EP as the 'new' i Hearts. Their previously EP as a three-piece was never released as they wanted to release material that the whole band had been involved in. 'Now we have a bassist we are focussing on a new sound, we need new recordings now and we want to make sure we get it right' explains Cece, 'its good that we've done it before because we now know what we want, we know our strengths and our weaknesses now'.

It can't be an easy thing to do either, their live performance is so energetic and completely captures the essence of the band. It's all about the crowd enjoying it and interacting with the band. 'We wont start a gig until people are right up at the stage, I'm like, come closer, get involved, I'm not going to bite you.I may spit on you but I'm not going to bite you.we just want to make sure that people are involved with us' says Cece. And that's not an easy thing to capture on a record. Trying to steer clear of that polished digital sound, the band are toying with the idea of recording the whole EP live, Abbey Road style. This one will definitely be one of the records to look out for this year.

Before that, they are competing in the Live And Unsigned competition and continue with their roll of big gigs, headlining London's prestigious 100 Club in March. Now with a full band, new material and a clear identity, there seems to be no stopping them. There is talk of gigs and festivals, live animals on stage and a music video that involves a Jumanji style stampede.in space. Whatever these guys do, they're going to break the mould.