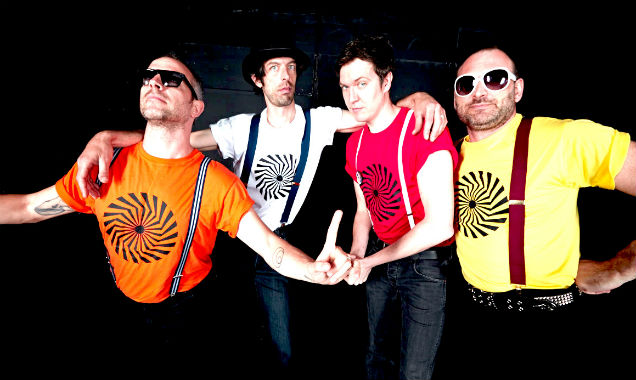 Interview With The Helmholtz Resonators April 2015

The Helmholtz Resonators are a strange bunch, but in a delightfully quirky way that doesn't make your teeth itch. They've always described themselves as 'Time Travelling Audio Scientists', but this time they've returned from one of their jaunts across the continuum with what they're calling an interactive sonicbook. Essentially, it's an album AND an eBook, fused together with interactive elements. Think a pop up book but with music. We caught up with them in between time periods for a quick chat.

Contactmusic: Can you tell us a little bit about your forthcoming album 'The Mystery Of Woolley Mountain'?

The Helmholtz Resonators: 'The Mystery of Woolley Mountain' is a modern day concept album. A story about a spiritual journey to a distant land to defeat an evil witch. Along the way the main protagonist Garland Vanderbilt experiences gremlins in the flesh and of the mind, wolves, monsters, psychedelic mind expanding forna and much more. The album comes on two formats - your regular mp3 digital album but also as an interactive sonic eBook adventure.

CM: What prompted you to release an interactive sonic eBook alongside the album?

THR: We have travelled across many plains and many eras in our fantastical time travelling Crystal Submarine. On one such journey we plummeted into the not too distant future and saw that people no longer just wanted to listen to music but interact with it. Upon arriving back in the present day; we decided to get in on this early and release our new music in the format of the future, for today.

CM: Do you think the lack of physicality with digital music creates distance between the listener and the artist?

THR: Possibly - we definitely love the physical, but we also love the metaphysical, empirical and the digital. Our last single 'Sunshine' was captured on a lovely slice of orange vinyl - sunshine literally in the palm of your hands. The new album is physical in the sense that you can interact with it using an iPad or such a device. Distance is as far and wide as one decides.

CM: The eBook tells quite the fantastical tale. How did you come up with it?

THR: One evening, the Helmholtz Resonators were assembled in the lab going through a collection of DVDs and books. Items such as Labyrinth, Alice in Wonderland, A Rebours, A Happy Death, Harvey and much more were being organised and sorted onto shelves. At the same time Chladni Plates was setting up some experiments on a table behind them. Falling back and without noticing, Garland Vanderbilt accidentally knocked over a vial of extracted psilocybin onto the portable heater below. The liquid was evaporated into a haze of gas that enveloped the room. The Resonators were subsequently taken into a very strange psychedelic state influenced by all of the stories and items they had previously been looking at. This journey became the 'Mystery of Woolley Mountain'... Or, it is all based on a true story.

CM: Talk us through the inspiration behind the album and the eBook. Is there anything in particular in music or literature that, you feel, directly fed into its inception?

THR: Musically, we were inspired by a whole host of things. It has more or less been written over a few years. Some of the songs were knocking about during our inception and the creation of the 'Crystal Submarine' album, but then we remixed that album to create Lystarc Musbainer and went a bit electro. So we moved through psychedelic garage to electro pop and arrived at what we're terming psychedelic pop. This seems to encompass and fit the songs, which are both catchy and memorable but have that added element of surrealism on top. Artistically, we could quote Kratfwerk, Grandaddy, Flaming Lips, the Kinks, East India Youth, the Beta Band among many others

CM: With the cross-medium release, staging the concept must bring up quite a few challenges. Do you have any plans for a live performance incorporating elements of the eBook?

THR: Indeed it does! It's difficult for people to grasp it at the moment and it's also very difficult to explain it without people seeing it for themselves. I guess this is the same problem with many new mediums - people really didn't take to the talking picture box when television was first mooted I can tell you! We are planning on trying to incorporate elements of the book into our future live shows. We definitely want to make it a unique experience.

CM: What are your plans beyond the album and eBook, for the band and the interactive sonic eBook format?

THR: We'd love for more people to get involved in this new format early on and see the wonders it can bring. Like the fantasy adventure books where you choose a path and turn to the relevant page, we'd like to incorporate some of that into the eBooks in the future. Apart from that we love experimenting and creating, so we want to make a lot of videos and are even considering some sort of video game perhaps.

CM: You've created quite a rich tapestry of backstory for the band. What was the reasoning behind adopting character personae?

THR: Adopted characters? The Helmholtz Resonators exist as a reaction to the stagnant and pretty mundane reality of the music industry and music business. Fed up with towing the line or trying to be something or someone chasing a scene, or listening to all the nonsense that is thrown at artists and thrown out by artists. We have experienced many things, including the success and trappings of being a modern day band in other musical projects. Therefore we came together and found solace as a group in this format. Plus, we all wanted to play drums, so when we first started out one of the rules was that after every song we'd have to swap instruments making sure we'd all get a go on the old bashy things.

CM: What's next for The Helmholtz Resonators?

THR: To begin with, an album launch party on April 29th at the Book Club in Shoreditch, then after the album release - more singles and videos. But who knows what will turn up with all these creative experiments and substances we can't help getting stuck into?

The Mystery Of Woolley Mountain is released 13th April 2015 via Proving House Digital. Music from the interactive album will also be available via iTunes.