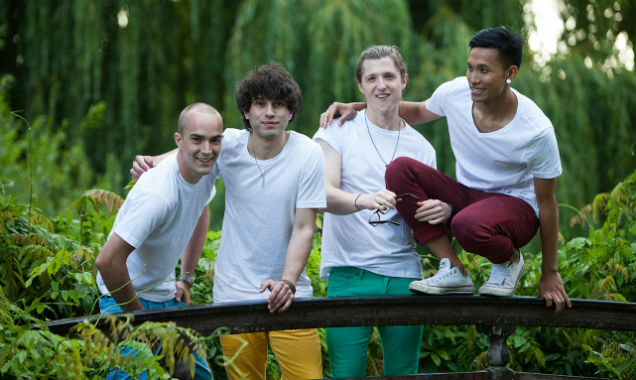 Interview With The Curious Incident March 2015

The Curious Incident are a cheeky indie-pop four piece haling from all over the globe. Their EP, 'Penny Lonesome', was released earlier this year and is all about money and the negatives and positives that come with it. The lads quite wittily refer to their sound as "pop infused indie rock with a Caribbean twist" which can definitely be heard straight away in their music. Their new single 'Please Don't Say' is due for release on March 30th 2015.

Contactmusic: How did you come up with the name 'The Curious Incident?

The Curious Incident: We certainly didn't kill man's best friend for it. We love Sherlock Holmes and people tell us that we're a little different so thought it seemed apt.

CM: You're all from numerous parts of the globe, how did you all happen to meet?

TCI: Cavey is from South Africa (and lived a big chunk of his life in The Netherlands where he met Diaz - in school). Diaz is from Indonesia and has also lived in South Africa, the Caribbean, Holland, Italy and LA (the b*****d). Dan is English and Mirko is Italian.

We all moved to the sticky honey-pot that is London (Cavey and Diaz were in cahoots) to pursue the clichéd musician's dream of success.

The closest we've gotten to emulating The Beatles so far is by performing at a Burlesque Club in Soho. So distracting.

CM: Who are your main influences?

CM: Your EP 'Penny Lonesome' is all based around the theme of money. Why did you decide to focus on this?

TCI: Penny Lonesome features 4 tracks and is all about needing more money and more love yet takes that struggle in its stride and doesn't falter into melancholy. As Londoners, ambitious musicians and people who generally prefer eating to being hungry (and also try to travel halfway around the world to see their families) we know all about needing a little more money.

The first song we were certain should be on the new EP was "Money" which pokes a bit of fun at all the super hits where the artist promises us that they don't care about money, the price tags etc. They might earnestly make such claims but then have product placement all over their music videos. We love that contradiction so, as we don't take ourselves too seriously, thought we'd tease some of our favourite artists a bit (e.g. Sam Smith and Aloe Blacc).

Here's what else is on the EP.

The Hunt: An eclectic and somewhat unexpected style mash with a positive blow-out chorus best suited to a Caribbean jump around.

Diane: A tale of youthful love in a school-time crush that's bloomed into an Elvis-approved marriage.

Please Don't Say: Perfect for telling that special someone (lover, friend, politician) to shut the hell up.

CM: Do you have big dreams of stardom and lots of money?

TCI: Money can't buy you (real) love, happiness bla bla bla but it can make sure you have a comfortable house to live in and good medical insurance. Our main goal is to be able to pay the bills doing something that we absolutely get a kick out of every time we do it and that's why we want to be professional footballers. Um, I mean, musicians.

Will we ever spend money on gold-studded, mink Dolce and Gabbana man purses? No.

CM: Where has been your favourite venue to perform live so far?

TCI: We played at Caprices Festival last April in the mountains in Switzerland and that was an absolute treat. We woke up that morning to a blanket of white and had to restrain ourselves from spending all day playing in the snow (frostbite is bad for finger picking). We ate fondue close to the point of requiring hospitalization and got to practise our Italian, French and German all in the same sentence. Wunderbar!

TCI: If we could live on the stage we'd be as happy as pigs in.We hope to release and tour "Penny Lonesome" in as much of the world as possible focusing on the UK, Europe and South Africa so that Penny doesn't have to be so lonesome. We're also constantly writing new material and will immortalize some of it as singles or a 2nd EP once Penny Lonesome has found a lot of new friends.