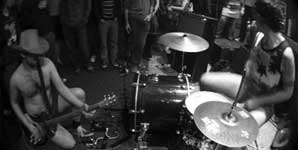 âItâs just a stupid name, it doesnât really mean anything,â says Andy Abbott whilst slicing up flyers in the Brudenell Social Club for another gig in âTankâs busy schedule. âWe were only going to play one gig, so we picked a silly name. Maybe there are better myths about the name than the actual reason.â Andy chuckles, happily slashing away while James kicks back and does the damage to a pint of Guinness. âWe played in Manchester on Friday,â James responds, âand this Girl from York said that Andyâs mum had a water tank that used to make lots of noise and I was like âWhat?!?ââ That Fucking Tank (or That Fucking That in Spain) are the kind of band that breed myths: about their name, about their songs, about their performance. So this seems like a good opportunity to scrap some of those myths; and create a few more.

Formed in 2003 by former Kill Yourself members Andy Abbott and James Islip, âTank began as a one-off excuse to play more when Kill Yourself vocalist Giles Bailey emigrated to Glasgow and subsequently joined Dananananackroyd. âWe were putting on a gig for a band called Vialka,â says Andy, still slicing, âwho were a two-piece from France and we thought it would be funny to do a two piece to go along with it - do a night of duos.â Fortunately, as a result of their musical joke, James and Andy continued to play together, more often than not face to face, occasionally provoking controversy. âItâs causing problems now because people are thinking itâs a deliberate decision to ignore the crowd,â says Andy, recounting a recent run in with a crowd at a squat in Chambory. He shrugs resignedly and carries on: âthe most striking thing to them about our band was that one person was turned away from them â to me it doesnât make any differenceâ¦â James, in the spirit of the entente cordial, took matters into his own hands: âI ended up picking up my drums and carrying them round to the crowd so Andy would turn around and play towards them,â he says. Andy laughs loudly. âI think they thought that was a bit more normal and liked that more.â But, as with a great many myths surrounding âTank, the set up was always a matter of practicality. âFor us, it was quite difficult music to play,â explains Andy, âbecause a lot of the ways that we come in to do riffs depend on me and James looking at each other â itâs not like counting, itâs to do with being able to watch each other.â Myth one dispelled.

Myth two: Pants. âAll these things that people seem to think are trademarks of what we do, all those things are just accidental a lot of the time,â says Andy. âItâs a bit unnerving; when we were playing in Oxford at the weekend and all these kids have got their tops off already and youâre asking âwhy are you doing that?â Thatâs not what the band is about at all. Itâs about me and James doing what we want to do.â James is a bit more forthcoming about the pants thing: âWe started doing playing in the pants with Kill Yourself when we were playing with this band called JR in Hereford - they liked to take off their clothes and play in their pants; it was a really funny gig that night so we decided to do that pretty much for the whole tour. Then it kinda stemmed from that into being a really practical way of playing, because if youâre doing a lot of gig in a row and youâve only got one set of clothes, it can get pretty horrible.â Andy relents a little, having finished his slicing. âI donât know, itâs nice when people expect you to do certain things cos it means that theyâve heard of you, but I never take my clothes off because people in the crowd are saying âgo on, take your clothes off!ââ

So far, you may be thinking that Andy and James are stubbornly non-cooperative, but nothing could be further from the truth. Over the years, âTank have mellowed to their audiences basic dancing needs, as Andy cheerfully points out: âA lot of bands start off trying to impress and they think the best way to impress is to play as best as they can. I thought it would be the direction we would go inâ¦ but after a while we realised that for people to have real good fun at the gig, they donât have to hear the most complicated music at allâ¦ and maybe in response, when we started writing some newer stuff we did something that was a bit more groove basedâ¦ and itâs actually a lot easier to play now.â Not only are they groovier, but their new single features the return of Kill Yourself vocalist Giles, a renewed relationship that they want to develop further. âPart of the reason that weâre asking Giles to play with us is the visual element,â says Andy, âGiles is like a totally amazing front manâ¦ Weâve only done one gig with Giles for one song and no rehearsals yetâ¦ The only time we ever have rehearsals is to write some songs.â But considering âTankâs new direction, Giles may be playing a bigger part in the âTank experience.

The said song, âThe Awesome Magnet is due to be released as a 7â picture disc with a bonus DVD on the 19th of November through On The Bone Records, partially due to Obscene baby Auction being âfucking dead in the waterâ and partially due to James offering to do it â according to one story. The other is that he was chosen from a long list of candidates for his enthusiasm, vision, personal hygiene etc. You choose your version of events. âJames offered to do a single much in the same way that weâve done records in the past,â says Andy, âwe tend to say yes to people who want to put our records out. And what heâs putting out is exactly what weâd put out on Baby Auction anyway.â The other part of the package is a DVD of Andy and Jamesâ recent European tour, a blend of live footage andâ¦ scenery. âItâs a bit like a home movie, in a way,â says Andy. James nods his agreement. âOur music friends want to know what the âtourâ was like, but other people, they always say, âyouâve been to some quite amazing places,â and quite often you just say, âyeah, we did go to Paris, but I was justâ¦ asleepâ¦ I think we went for a drink, maybeâ¦â and itâs a) hard to remember what youâve done, which is kinda frustrating, and b) itâs nice to look back on places youâve been, see it for a second time. And it just came out of that.â Andy continues, making an important point about âTank: âI think itâs important for people that come across That Fucking Tank to realise that we do do all that stuff ourselves.â Not only that, but they enjoy it. Immensely. âI like playing to a lot of people and I like going to new places,â says James, âitâs a nice way for us to spend time together.â

And who could not enjoy spending time with James and Andy. We chat for over an hour about band fakery, European hospitality and British musical snootiness; frankly thereâs more than enough for three interviews. But if thereâs one underlying message about âTank, one legend if you will, it is this: like what you do and do it yourself. âTankâs a good celebration of amateurism,â signs off James merrily. âMost music is!â concludes Andy. Such professional amateurs.