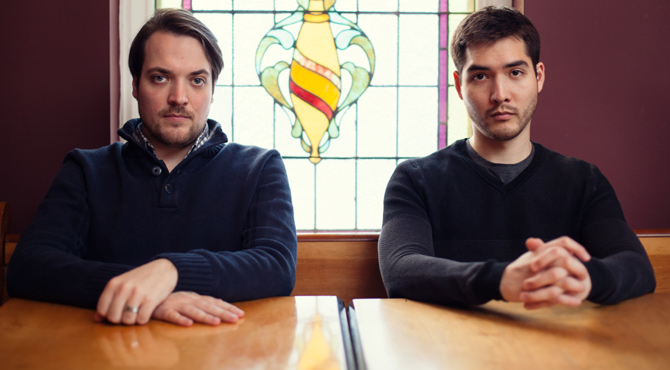 An Interview with Strange & Primitive

Strange & Primitive are a Canadian duo with a flair for making electronic rock that puts the 80s to shame, and a collection of animated music videos that not only capture their music perfectly, but can also be pretty amusing. They're releasing their self-titled debut album in the UK on 20th November via The Deep Floor Inc.. We managed to get hold of Jeff Musgrave and Graham Fish for a chat ahead of the release.

How and when did you start making music together?
Jeff: We met when I applied to a listing for a singer for a different band that Graham was currently in. We got along well and soon after formed our own project.

Graham: This would have been around 2007. Aesthetically, we were on the same page and I think we were both interested in the sound design aspects of making music. There was an ease at which we seemed to be able to work and a trust was built really quickly.

Can you talk us through the reason why you decided to add vocals to your music after writing pure instrumentals?
Graham: Our instrumental album came out in 2012 (under the name Audiograft) but we had been making music together since 2007. Even though it was just one release we were really ready to add more elements and different textures to our music. The most obvious additions to our music that we could make that we felt were missing were words and a human voice. Also, in most cases there was a story there or a theme we had in our minds and the only way to share that with others was with the titles of our tracks. So this was a solution to the need to communicate more meaning to an audience.

Jeff: Initially we were attempting to add vocals on music somewhat similar to Melody in the Half-Light. We even had some ideas for vocals on some tracks off that album, but after experimenting it became clear that the structural side of it wasn't a good fit for a voice. It was a much bigger challenge than we anticipated since you really have to rethink how you compose, arrange, and mix music when a vocal is taking center stage. We actually wanted to bring in multiple vocalists originally since neither one of us had any background in voice and we wanted to cover a wide range of moods and tones. As it happened, we couldn't find anyone that really meshed with our sound, so I had to learn how to sing! Like I said, big challenge.

You share a strikingly similar sound to Talk Talk. Is that a conscious thing, and how does the comparison make you feel?
Jeff: It wasn't deliberate, but we're fans of Talk Talk already, so it's definitely a compliment.

Graham: Yeah we'll take any comparison to Talk Talk since we really love them. As Jeff said, we don't purposefully try to reference other artists. Most of the time our discussions are about the mood, structure and lyrics of our song. Once those are settled we'd start making final decisions on tones and those decisions are directly related to how best we think we can service the soul of the song. Afterwards someone might say, "hey this reminds me of x". This probably arises unconsciously just by having an aesthetic that we're drawn to at the time. In the case of Talk Talk, it's a band we really like a lot so comparisons are more likely to happen naturally.

What made you decide to shoot Eureka in claymation, and was it a frustrating shoot? How hands on were you with the process?
Jeff: We had a lot of fun recording the song and I think we were looking for a way to get that through visually. Graham and I had always talked about having our videos parallel the themes of our songs. It was always important for us that they added to a song's meaning. In Eureka's case there's some real issues with science, the human capacity to understand, and becoming passive observers to scientific progress. There was also this feeling of anxiety and paranoia within the song. In the end we decided it would be best to parallel the themes comically with a claymation.

Graham: I think that decision was made as well because the brainstorming naturally just kept getting funny. At some point you have to go with it. The video was made with the help of our better halves and our great friend Dave Nadalin who I think was the only one who had done any Claymation before. He sculpted the characters and did a lot of animating for us. Crestina Martins shot the video, co-directed and helped edit. Kirsten Schaefer built the sets and did a huge chunk of the animating as well. We were very hands on though with writing, directing, storyboarding, we also animated, some set building and editing. Claymation has its frustrations but it's also very rewarding. Everyone would be wiped out after finishing a scene but as soon as we played back the sequence of what we had done everyone would always be gearing to go to the next scene. The Spaceman and Robot are  absolutely characters we'd like to return to in the future.

You're based in Canada. Do you have any plans on playing in the UK?
Graham: Touring is something we're hoping for in the new year. The UK would definitely be on the wish list.

Tell us about the album. Is there an underlying theme, a message you want to get across?
Jeff: We wouldn't call it a concept album but there's themes of communication, misunderstanding and identity.

Graham: Lyrically the songs are inspired from a wide gamut of subjects but you'll often if not always find those themes in each song. They're not always the centric theme though.

Musically, where would you say your strongest influences come from?
Graham: I think I'm mostly influenced by film. Musically the artists who achieve a sense of place in their recordings or a cinematic atmosphere tend to be my favourites. Pink Floyd, Peter Gabriel, Radiohead, David Bowie, King Crimson, Talk Talk, Brian Eno, Daniel Lanois, Talking Heads, Tom Waits, Nick Cave come to mind. Lately I've been listening to a lot of Grizzly Bear and Wye Oak.

Jeff: My parents are both classically trained pianists, so naturally I was exposed to a lot of classical music, and some jazz while growing up. Outside of that I listened to a lot of Radiohead, Jane's Addiction, Boards of Canada, and Nine Inch Nails during high school and early university. Later I branched out to a lot of the music Graham mentioned, as it was kind of a natural progression tracing the influencers of the bands I liked. Plus we tend to share a lot of the music we like to each other.  Also, Wye Oak's Shriek is fantastic, so anyone who hasn't heard it should give it a listen.

Is there anyone on the scene back home that you can recommend to us?
Graham: We were introduced to Tara Baswani recently and we really liked her sound.

Jeff: We also really like Canadian artist Loscil. We spend a lot of time in the studio though so we don't get out as much to experience the scene as we probably should or maybe we'd have more suggestions.

Have you any plans following the album's release?
Graham: We want to finish the year with more videos and then in a perfect world we have a new album next year and more video content for it. Visuals are really important to us and we have a lot of fun making videos so we'll want to keep that up.

Jeff: Hopefully we can get to the UK soon as well!