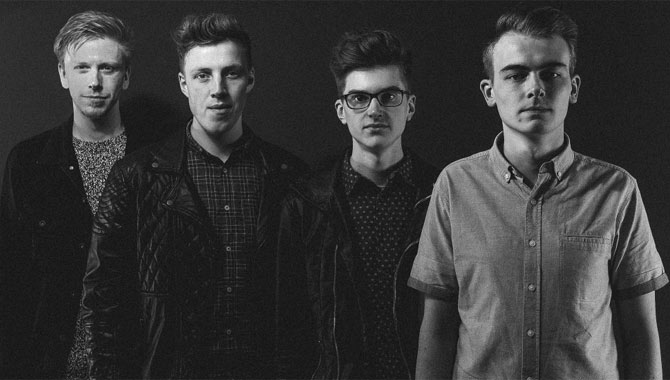 Edinburgh's Shvllows' latest single 'Zurich' is a fun fusion of electro pop and indie panache. The four piece are relatively new to the scene and although their music is full of uptempo melodies and epic vocals, the lyrics explore anxiety and self-doubt - they're a little deeper than your average electro-infused indie band.

Tell us how Shvllows got together?
The four of us met at college where we were all studying a degree in music. Having all previously been in various bands that had run their course, we found ourselves drawn to each other through a shared passion to make the kind of music we love. It's not the most exciting story but it's true! Our academic musical backgrounds gave us an advantage in the beginning, so we knew we wanted to take a year in isolation to write an album's worth of songs, as well as work out our plans and goals for the future and creating a polished and professional image on social media. No one ever wants to hear about the nights spent working on spreadsheets and the same 3-seconds of the same song for 4 hours, but it's been worth it. Trust us.

You've recently release the single 'Zurich'. What is the single about?
'Zurich' deals with the themes of anxiety and isolation, and the extreme lengths people will go to to overcome them. The verses of the song follow the main protagonist who is suffering from these emotions, finding themselves at their lowest point. In contrast, the synth driven, uplifting choruses of the song promote positivity, and the overwhelming message that no one need ever be truly alone. It is not our aim to bring people down, but rather offer them a shoulder to cry on and an arm to throw around them.

There's a distinct electro infused indie sound here, what are your influences?
As music lovers, the four of us listen to such an enormous range of genres and bands, and so many of them have helped shaped the sound we have today. Bands like Everything Everything, The 1975 and St Lucia have been a huge inspiration to us, both musically and with the direction their careers have gone so far. We're also into prominent electronic-indie bands like The Wombats, Chromeo, Prides, CHVRCHES, PVRIS, The Killers. The list could go on for days. The 80s synth sound we've developed pays homage to the likes of Duran Duran, Joy Division and Prince. A combination of the influences of these bands with our own unique songwriting ideas gives us a fresh, new sound that has remained relatively untouched in Scotland.

You're from Edinburgh and Glasgow famously gets a bit more kudos for it's music scene - tell us what the Edinburgh scene is like though?
The Edinburgh scene is in a really great place at the moment. It's taken a bit of a knock in recent years, and in some ways it's justified: Edinburgh just doesn't have the venues that Glasgow does, and there seems to be less and less places to play. But I think as a scene, the existing venues and promoters have pulled together and are trying everything to restore credibility to the city, credibility that we think is deserved. It's a shame that 'outsiders' knock our close little scene before they've even given it a chance. There's been an incredible rise of truly talented young bands coming out of Edinburgh in the last couple of years, and it's great to see unsigned Edinburgh talent like our friends Indigo Velvet and Mt Doubt getting the recognition they deserve at T in the Park this summer. There's a lot of exciting things happening in the Edinburgh scene at the moment, you just have to look in the right places.

What's it like being a Scottish band trying to get heard outside of Scotland?
Personally, we've had some success in this respect with 'Zurich', and have been played on a number of independent radio stations around the world and Made in Chelsea. Again, it's easy for major record labels and managers to look straight to the bigger cities and scenes like London, but more and more people seem to be recognising the huge amount of undiscovered bands in Scotland. Trying to convince someone of importance to give you a few minutes of their time to listen to your band is extremely challenging, and it's hard enough in Scotland, never mind the whole world. However, you only have to look at the international success bands like Biffy Clyro, Prides and Fatherson have had to see that it can happen.

What are the biggest problems, you would say, that all independent bands face?
One of the biggest problems facing independent bands is the lack of opportunities to take that next step into the actual industry itself. The number of new bands signing lucrative record deals and 'making it' has free-fallen in the last decade, meaning that the competition has become so much more fierce. With so many bands in Scotland alone, it's a race to see who can impress first and who can impress the quickest. A lot of the bands getting recognition these days are the ones that have done all of the hard work first behind the scenes, meaning that they always have something fresh to offer managers and labels upon request. Financially, it can cost a ridiculous amount of money to get things up and running, but you just have to be willing to make that sacrifice and eat ready-meals for the next year whilst the views and plays roll in.

What are your plans after the single?
After our single launch in October, we'll be hiding ourselves away until the end of the year to work on a whole bunch of new singles, possibly an EP. We've got hundreds of song ideas in the bank that we'll be working on to keep our shows fresh and exciting for the audience. We have a lot of exciting plans for the coming year already confirmed, including a number of high profile shows and maybe even another release or two. 2016 has been extremely good to us and we're looking forward to an even bigger year in 2017.

What are your three wishes for the band?
Theres so much to choose from, that's an unfair question! We would love to be able to travel across the world writing music that we ourselves enjoy listening to and playing live. Play all the UK and International festivals we grew up watching and a support slot for EverythingEverything, just one night would make our lives.