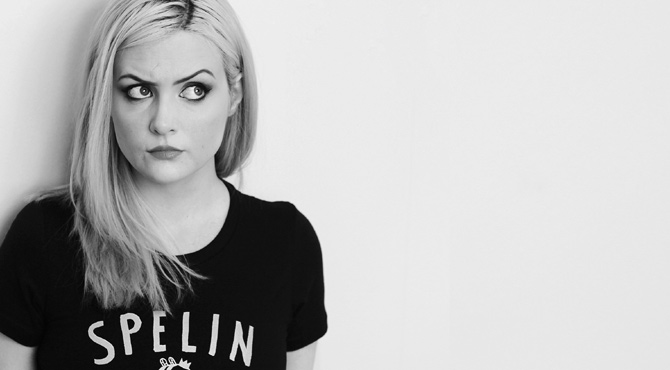 Reverieme is Louise Connell - a young Scottish artist who writes intricate, introspective folk songs that explore her deepest desires and most complicated emotions. Her music is simple and pure but she's an artist with many layers. She's recently released EP 'Or Else The Light', which is a strong foundation for her to draw upon and has already got people intrigued to find out more...

What does the name Reverieme mean or represent?
I remember learning the word "rêver" in school and thinking it was very beautiful. When I started putting a name to my music, Reverie seemed to fit because all songs are like little dreams. They aren't necessarily coherent like stories, but they can suggest and communicate a significant level of meaning and thought when you take the time to consider them fully. Adding 'me' to the end was just a way to separate myself from other artists with the same name. The fact it created a word that's like a linguistics assessment to pronounce is just a tremendous bonus.

What is the track 'Plankton' about?
Queen of the succinct explanation that I am, I have around 2000 words on this over on my blog. I've tried to paraphrase this a few times, but I could write a thesis on whether or not to have dessert, so I'll quote a little here (while trying to ignore the feeling of my skin crawling as I reference myself, yikes):

In my old job, I would assist with pregnancy ultrasounds and very occasionally I would be present when a woman was told she had miscarried. I often make light of how terrible pregnancy seems ("It didn't work out for John Hurt, you know."), but in a reality where so many women lose children, and the worldwide mortality rate for pregnancy is around 1 in 100, it isn't really a joke at all. It's partly what 'Plankton' is about: being there when someone finds out that the future they had been imagining, a future so vivid it's saturated their present, is gone. And there's nobody to blame. The song is selfish, really. It was me trying making sense of something unfathomable, unscrambling ideas till I could form a lucid opinion: that those women were still whole and right and strong.

The video features cockroaches crawling over your face - was this our idea and was there a particular symbolism here that you were trying to convey in relation to the song?
Again, I've written a fairly lengthy explanation of the video in the aforementioned blog post, but I'll try to condense my thoughts a little. The video was, whether consciously or not, an attempt at some sort of castigation, because I felt the song was so selfish: "I'd never throw a handful of cockroaches on another person's face, but here I was excitedly planning to do it to myself because I felt like I deserved it." It slightly backfired, though, because I didn't mind having a few cockroaches ambling down my face. It wasn't the greatest moment of my life, but it wasn't any worse than watching a newer episode of The Simpsons.

Is there a general theme to your EP?
There isn't much in the way of one coherent or continuous theme throughout the album. Most of the songs were written over the past year, though, so, to that end, the gelatinous brainy goo from whence they came is probably the same. The album is comprised of songs chosen from a much larger group and there are quite a few tracks lying in wait, like noodly snipers, that we haven't chosen for this particular release. They'll be reunited on the full album on which I'm currently working: 'Straw Woman'. Each track has its own story, though I feel like it's far more sensible for the person listening to decide what that story is. If I could explain myself properly through anything other than the songs I write, then I probably wouldn't need to write them.

What inspires you when writing music?
Most of the time, I'm inspired by reading or watching or listening to beautiful pieces of work, and going through a process during which I try to steal some of whatever made that thing beautiful. So many of my songs are about books or stories I've read, and I think that will always be the case when I write.

What would you say you're bringing that's new and fresh to the scene?
Well, I am the only me around. Aside from that, I'm not hugely concerned with being seen as new or fresh. I really enjoy exploring and investigating what's influenced the music I love, and I'm thrilled when listeners infer what's inspired me. I think you just have to be honest and hard-working in what you do, and hope that other people like it. That was a fairly long-winded way of saying I'm not terribly original, wasn't it?

What do you hope new listeners feel or experience when listening to the EP?
I hope they enjoy it, of course, and that they really do listen and form opinions and ideas on what I've written. I hope they don't write-off what I do based on any preconceived ideas about my genre or style. Mostly, as with everything I do and am, I hope they don't hate it.

Who have been your biggest influences musically?
I love artists like Kimya Dawson, Jenny Lewis, Amanda Palmer, Regina Spektor, St. Vincent, Grizzly Bear, Arcade Fire, Neutral Milk Hotel, Of Montreal and most folk who really care about what they do.

What is next after the EP?
The next Reverieme release is a full album, about which I'm very excited, that should be out at the end of this year or the beginning of next. It'll have some of the same songs as this EP but with a much bigger sound. The metal version of 'Plankton' will be a particular highlight.