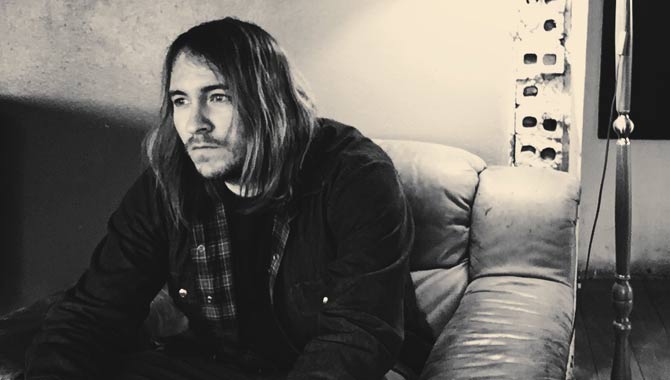 An interview with Poor Nameless Boy

After releasing his 2nd full length album 'Bravery' last year we sit down with Canadian Folk act Poor Nameless Boy to talk all thing album, his new video for 'Atlantic Ocean' and coming to the UK/ Europe this month to tour.

Your storytelling and sound has been described like that of Bright Eyes, Conor Oberst but how do you describe your sound in 3 words?
Intimate, sweet, pensive.

So we hear you're coming over this month to tour UK and Europe and playing a few festivals, What's the best thing about touring?
Everything that is done from a keyboard or from behind a notepad or guitar is attempting to explain or represent what hearing the live music is like. Nothing compares to a live show. I'm excited simply to be able to connect with people, hear other people's stories, be inspired to write, and play my guitar and sing my songs. There's nothing like it. Remember an amazing concert you saw recently? There's nothing like live music.

You released your second full-length album last year called 'Bravery' with a track of the same name, what inspired you to write the album and what was the song about?
I was sitting around in this enchanting old house I used to rent and thinking about my roommate's golden rule. "If you haven't used your _____ in over a year, why not just get rid of it?" He always pushed me to keep what's truly valuable to me around me, without being cluttered by the rest. I wondered about how often I used the brave side of me. There are beautiful and enriching things beyond the things that scare us and we can't have our bravery be something that gets hidden away. After giving it some thought, this track represented the message of the album. There are deeper, more important things out there. Don't forget to look for them.

You're releasing the video to album track 'Atlantic Ocean' which is made up of clips from your previous tours, why did you choose this track in particular?
I mean, in reality it was easy because I literally had to fly across the Atlantic Ocean to do these tours. Easy choice, right? Haha. In all seriousness, it's simply one of my personal favorites. Distance is a weird concept and we feel it in all shapes and sizes. We can connect over social media and distance ourselves on social media. We can spend all our time with someone and yet feel at times like we across the ocean from them. "Heaven is closer than it may seem and the Atlantic Ocean never bothered me".

What's your favourite gig you've ever played?
The ones that people don't all sit near the back of the room. I'm a personal guy. It's like going to a party and at the end of the night feeling like you never got to talk to that girl you went there to specifically talk to. I feel comfortable on stages playing to thousands or in living rooms playing to a handful. I'm not sure if I have a specific favorite gig. Last fall, I played some songs on a train from Berlin to Hamburg to a packed train car. That one was kinda cool.

What inspires you to keep creating music?
I really do love this question. This world has so many inspiring things around each day. I truly believe that. If you don't think that, then you've stopped paying attention to the right things. I find inspiration in ducks bobbing for food in swallow lakes, people telling me about their first love, or someone saying, "maybe next month I'll have time for this". They might all not make pretty songs, but they are important stories to tell one another regardless.

Where do you see yourself in 5 years from now?
Drinking coffee, talking about how fast the last five years went. These last five years have felt like a whirlwind but my heart and travel legs haven't even begun to travel. I know I will be travelling and writing music until God or others tell me politely that it's time to stop.

What's your favourite part of being an artist?
Being able to create, and pushing myself to discover the beauty of how others create. I think when I first started writing, I was focused on trying to tell my own stories for my own expression. It was something I needed. Now, I find quite a bit of joy in trying to tell stories and emotions that I hear from others. I certainly resonate with the heart of the stories, but I hope that in some way, I'm singing about the things you couldn't quite sing yourself. Our human hearts are pretty similar when it comes to joy, hurt, and wonder.

If you could be any other artist, who would it be and why?
Good heavens. I've always wanted to be in a four-piece Motown group. There's a ton of people I'd love to be for a day. Jim Atkins from Jimmy Eat World. To get in Noah Gundersen's head. To hear the stories from Stevie Wonder. Being Justin Timberlake would be fun. Honestly, I just love when someone rises from seemingly out of nowhere and nobody realizes that they worked their butt off to get there. While I'm in the UK I'm going to try my hardest to see Gabrielle Aplin if I can too. I need to hear those songs live at some point in my life.

If there's one song you wish you had written what is it?
Anyone who knows me, knows my answer to this. I think one of the most underrated songs of the last decade actually won a Grammy. Funny how that works. "Somebody That I Used To Know" by Gotye communicated so vibrantly the emotions of the self debate inside of a relationship. He, somehow, was able to change the entire context of the song after the first chorus by introducing the fresh perspective sung by Kimbra. She sings one line.... and suddenly everything that he just finished saying takes on a new identity. One of my songwriting aspirations is to write a song as truly powerful as that one.