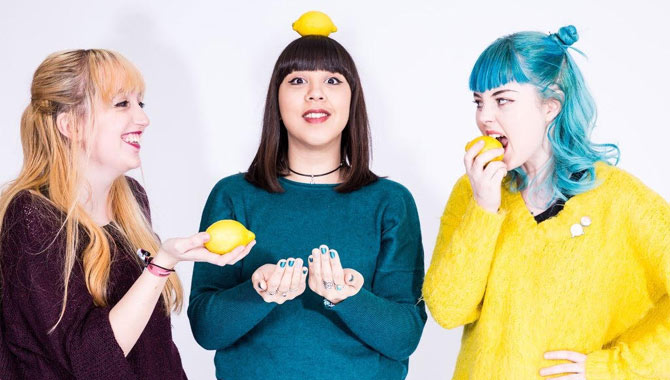 Peaness (that's '-ness' not '-nis' - titter ye not) is a UK three-piece band, based in Chester. Jess (bass and vocals), Balla (guitar and vocals) and Rach (drums) are part way through a UK tour that takes in most self-respecting big British cities, and played a particularly glorious shindig recently at their spiritual home, Telford's in Chester.

If you want the approximate musical recipe for Peaness, you'd be best putting Courtney Barnett, Sleater-Kinney and the Go-Gos into a blender (NB - for those who are rubbish with metaphors - don't; it's illegal). They have a rapidly-growing and loyal fan base, especially from regular gigs in the North West, so much so that two fans recently asked them to play at their wedding reception.

Peaness envy is clearly a phenomenon - this band is a lean, green fuzz-pop machine, one which has caught the excitement of Chris Hawkins, Steve Lamacq and Mark Radcliffe on BBC 6 Music in recent months. Radio 1's Huw Stephens has been a fan from their very early days. Another giant leap involved linking up with Alcopop! Records for the release of their frisky, January 2017 "Same Place" EP.

Contact Music caught up with Peaness at the sound-check to their gig at the Komedia in Bath, where they were doing a meet-and-greet with a ten-year-old fan who couldn't attend the evening gig due to age restrictions. They may write songs about the things that vex them (of which there are many) but they do it with humour and humanity. Peaness are beguiling purveyors of nark with a heart.

Contact Music (CM): Can you tell me about the origins of the band?
Peaness (P): We started practising in Rach's bedroom after two of us graduated. Rach was still at uni in the year below. We were just messing around, but with a full drum kit and amps - in a terraced house. Rach moved back home to Birmingham for a bit, but moved back and we decided to give it a proper go, record our first EP, have our first gig. It was a bit of a laugh to start with.

CM: The name is quite a hook. Can you give us a sense of where it comes from?
P: It was a joke name that we gave ourselves before we went online or did any gigs that just stuck.

CM: Considering that you went for it because you needed a name, has it turned out to be more of a blessing or a curse?
P: It's been fine. We were apprehensive at first. People were like, "What?" or "You HAVE to change your name," but a lot of people listen to us out of curiosity, because they don't know what to expect. That's a blessing, isn't it? You hear the name and you stop and listen. It's just funny, and people need to lighten up a bit. If they get offended, then it's not for them.

CM: Does it capture the essence of what you're like - a bit of fun?
P: Yeah. We definitely don't take ourselves too seriously. We work hard, but it's fun.

CM: What would you say is the essence of a Peaness song?
P: Slow-punk, fuzz-pop, indie pop, DIY. It's got that punk ethic, but it's a bit more polished.

CM: What about the subject matter?
P: A lot of songs come from the conversations we have. We've got a song called "Ugly Veg" which came from a documentary we watched about food waste. We got quite wound up by it and we wrote a song about it. Songs come from things we talk about and things that are relative to people our age. There's relationships and escapism too. We might comment on political things sometimes, but I wouldn't say that we're a political band.

CM: Age seemed an important factor in your most recent release, "Same Place". Can you tell us more about that one?
P: That song's just about being in the same place for a long time, Chester for us, just getting by, working, wondering "is this going to be for ever?" and kind of accepting that it might be.

CM: In terms of the dynamic of the band, do you find you fulfil particular roles?
P: (Jess) Those guys call me 'Hermione', from Harry Potter, because I'm bossy. (Rach) We've always said that we all want it to be equal, we want to be part of a band where it's not one person taking over.

CM: What are your current plans?
P: Lots of gigs and festivals. Releasing our new EP. That's in the pipeline, due in April. We're doing that with Alcopop! Records. That's really exciting. We're going to start pushing that soon. The A-side's going to be a new EP called "Are You Sure?" and the B-side's going to feature our first EP, which was called "No Fun".

CM: What would you say is your best experience so far in the journey that is Peaness?
P: There have been a few really good gigs that we've done, like Focus Wales last year. It was a live broadcast on BBC Radio Wales and it was so busy in there; we weren't expecting it. We thought there was just going to be a few people. It was so late, but it was really buzzing. Telford's is always great. We played there last week and it just seems to get busier and busier every time we play there.

CM: Biggest lesson learned so far?
P: It's best to do as much as you can yourself. DIY.

CM: What is the joy of being DIY?
P: It's knowing exactly what's going on, having control, not being told what to do and not being afraid to say 'no' to things. We say 'no' to loads of stuff, so we don't wear ourselves out.

CM: Do you like peas, and if so, what's your favourite pea?
P: (Jess) I don't actually like peas (Rach) Petits pois, maybe (Balla) I like mushy peas.

CM: Can you recommend some of your favourite up-and-coming bands that aren't Peaness?
P: Catholic Action - we played with them at the Deaf Institute in Manchester. Queen Zee and the Sasstones - they're a really cool Liverpool band. Sustinere - they're a great Chester duo, a bit like Royal Blood. Denuo have been around for ages, but they're a great under-the-radar band. Tim The Mute, as well, he's Canadian. He put out our Canadian 7" single on Kingfisher Bluez and he has a song called "Mushy Peas".

CM: When the three of you are together for any length of time, what's the thing you're most likely to do?
P: Nap, eat, drink coffee. Be daft. Mess around. We laugh a lot; we just like to giggle.

CM: And finally, does the band have a motto?
P: Probably the phrase we end all emails, Tweets and Facebook posts with - "Peas and Love" (with a green heart after it).