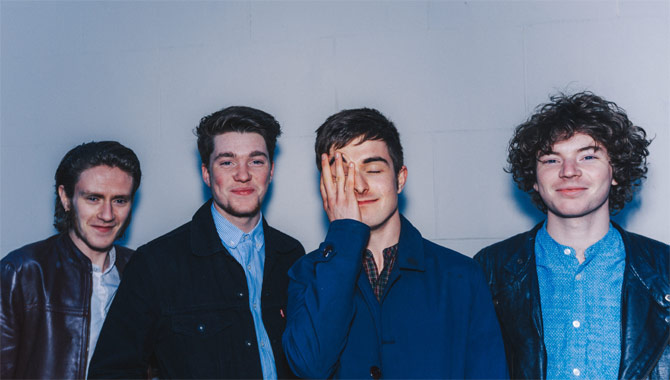 An interview with Moonlight Zoo

Scottish indie pop quartet Moonlight Zoo are about to release their infectious new single 'Melting', the follow up singe from previously released track 'Breaking Or Broken'. The Dunfermline group have spoken to us about being on the road, their writing process and what they have in store for the near future.

As a band, how would you describe your sound to newcomers?
Funky Alternative Pop music

There's a lot of noise online with new bands, how do you keep what you do fresh, excited and intriguing for new listeners?
Social media is a great way to involve listeners more in the music, we are always sharing photos & videos of ourselves in the studio or at rehearsals, as well as trying to find inventive ways of involving our audience Like, we ran this competition last year where we asked our Facebook followers to post ideas for songs, we then picked one & wrote & recorded it in a day, then shared it on our social media.

This was great for us as we got a lot of response & activity from our request, but it also helped us connect in a more personal & direct way with the people listening to the music. If all your doing is posting gig & release announcements it can get a bit stale, i think the best way to keep people interested is to directly involve them in what your doing, which is easy now with all the various forms of social media.

How does it compare to playing back in your home town of Dunfermline to being on the road?
The difference with being on the road to playing at home is the challenge of trying to attract new listeners & grow our fanbase. We enjoy playing to a different crowd we are unfamiliar with, as it always a little bit more exciting. The goal, for us is to make people who haven't seen us live before feel like they need to come see us again, or check us out online. Because there feels like their is a little more at stake we do find shows further afield get us a little more nervous, where as playing at home you feel a little more comfortable surrounded by familiar faces. Both are equally enjoyable.

How do you go about your writing process and what influences you the most creatively?
Ideas for songs can literally come out of anywhere, sometimes it when you least expect it - like in the middle of a conversation, or something on the news. Other times you can be more directly influenced ie. if your watching a film or reading a book, and you feel inspired to write from that. That initial spark is always what starts the process, you then just need a couple of chords & some rhythm & your on your way.

We usually write as a band, playing things over & over & over till they feel right. At the end of rehearsals we'll always film what we've done on our phones & listen to it the next day. Its amazing how your impressions of something can change when your not actively involved in creating it. We'll keep refining a song till we feel its right, then we road-test at a gig, which can make you feel differently about it again. Every song is always in a state of flux till that point when you get it into the studio & record it, but even after that there are always things you wished you had done differently. No song is ever really finished.

There have been a lot of new indie pop bands coming out of every corner of the UK, so what gives you guys the edge to break through?
We feel our signature sounds comes from three part vocal harmony, which we feel helps our words stand out against the music a lot more than if they were sung with one voice, it also allows us to experiment & achieve a lot more with the melody. Our sound as a whole has changed and improved from when the band started and hopefully it will continue to do so, as we are determined to make every release bigger and better each time.

Is there a theme to your music?
We don't see ourselves having a theme, and i'm not sure if we would want something as it could make us predictable. As we have developed the songs have became less personal & more about the bigger picture.

Specifically what is the single 'Melting' about?
The song explores the idea of how being with someone can lead you to forget all else. Right now with all that is happening in the world; all the misery, corruption & controversy - having someone can help you not feel so bad about it all. this song is a celebration of that, whilst also trying to serve as a subtle reminder of the bigger picture.

What message do you think the band convey's to its listeners?
Don't worry. Be happy

What is in store for Moonlight Zoo after the single release?
We have played three dates of our single release tour which have all been some of our favourite shows to date. We have our first gig in London for This Feeling supporting Trampolene on November 5th, which is very exciting for us. The single comes our officially on November 4th, so after that we will we doing all we can to promote and push the single.
We are already in the process of writing our next single, with the plans of a release early next year. We can't wait to share even more new music from us!