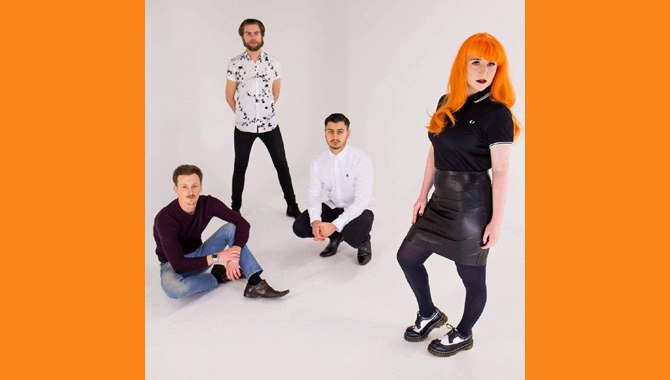 An interview with Life On Standby

January is a fantastic time to be in Glasgow, mainly due to the feast of diverse music being played at the cities 2 major festivals. King Tuts Wah Wah Hut holds the New Years Revolution which showcases a wealth of talent from all over Scotland and for 2 weeks Celtic Connections celebrates the diversity and culture of music from across the globe. This year also gave me a chance to catch up with some old acquaintances, little did I know I was in for a surprise.

Having last spoken with Life on Standby at the beginning of 2015 everything was reported to be going to plan. The band appeared as determined as ever to succeed and introduce their music to a wider audience. As I was to find out though, 2015 proved an extremely testing time for the band but in true fashion they decided rather than throw in the towel some drastic action was called for.

In 2014 you entered and were successful in the Red Bull UK new artist competition, how did that success carry you as a band? Are you still feeling the benefit of your association with Red Bull?
ED (Erin Donnachie - Lead Vocalist )  - To be honest, it's totally worn off.

GD (Gianluca Demelas - Drums) - I think we went into the Red Bull thing thinking it was going to be the start of something big. With a bit of luck on our side we found ourselves in the middle of something we had dreamed of, something exciting and it was fantastic. After we had played the Download Festival though, things kind of took a dip. This had been our first taste of success but unfortunately we didn't have the experience to know how to follow it up.

Would you say the association with Red Bull gave you a boost?
ED- Absolutely. The whole experience definitely gave us, as a band, a boost and I think individually it gave us more confidence, we all felt we wanted to work harder and keep pushing forward. It certainly opened doors and introduced us to people who may not have otherwise heard of us. As Gianluca said, we just didn't know how to go forward. I guess we kind of expected the Red Bull name to carry us.
GD - For example, through the Red Bull competition we got to know Romesh Dodangoda [Producer / Mixer] and he mixed and mastered our competition track. We contacted him again last year to ask if he would be interested in working on our new EP, he said yes straight away. Without the Red Bull experience I don't think we would have access to people at that level in the industry.
GW (Gavin Williams - Guitars/Keys) - In a way we were a bit naive in respect of the music industry. When we entered Red Bull the band had been together for around 3 years. We were sort of learning our trade. We had a bit of a following and we were playing gigs in Glasgow and other cities, but to go from there to playing Download Festival, almost over night, was a massive jump. To maintain that without support was almost impossible.

So, would you recommend the experience to any bands coming through?
GD - Yes. I think without doubt it is the best experience we have had as a band. Even if nothing came of it, I would recommend it just for the experience alone.
GW - It was a fantastic experience but it was tough. At times the pressure of being in a competition was enormous. To do so well was completely unexpected, you know. We were the only Scottish band in the competition and to have the whole country behind us was incredible, who would have thought for this wee band from Inverclyde could have achieved so much?!

In terms of establishing yourselves as a band, how far down the road are Life on Standby?
GW - As things stand we feel we have kind of gone backwards.
ED - last year we had a hold up with the new CD which made things feel like not much was happening. As Life on Standby we lost a lot of momentum so we had a group discussion and came up with a plan for the way forward. We've sorted out the marketing for the release of a new EP and recorded a new video for the next single. We decided to do it properly and wait until everything was in place and we all felt ready. We also decided that we needed a clean slate and a fresh start, so the next release will be under a new band name...

And the new name is?
ED - Banshee. Same members, same fantastic music.
GD - During the last year we have learned a lot form past mistakes, which in a way is a good thing. Last year things were so slow, at one point it felt like we had hit a brick wall and we were struggling to move forward. To be honest it's probably only at the end of 2015 that we have picked things up again. We have learned what we need to do and who we need to do it with us.
GW - Yes, the last year has been tough. For me it hit rock bottom around November, we were coming to rehearsals, plugging in and kind of hoping something would happen. I suppose we sort of lost direction. Now that we have taken this decision the creativity has returned. We're writing again, tunes are flowing, ideas are flowing. We're having fun again. Spirits are high.
ED - Essentially we want to reinvent ourselves. We felt that even with the new music, a new look, even a new sound, particularly to those inside the industry, we would still be that band from Inverclyde who done Red Bull and Download that can pull in a crowd. We want to get away from that. Banshee won't be massively different, maybe a bit more pop like, but not majorly.
GD - We're a wee bit more on the ball now, a bit more business savvy. Initially we were unsure about the name change. Life on Standby has been a big part of who we are and of course, what if the name change doesn't work? Now that everything is falling into place we're confident it's a smart move. We're feeling really excited about it.
ED - I think it would also have been more difficult to reinvent ourselves under the same name. It's a big risk but I think folk like the new stuff. We're confident it will pay off.

Can you give us any details about the new Banshee EP?
GW - We plan on releasing the new single 'Say my Name' and the video towards the end of February when we officially announce the end ofLife on Standby. . The new single will be available on download but if you want to hear the full EP you have to buy the disc, which is due out in March.

When we speak with Scottish bands about King Tuts they all agree there is something special about playing there. What are your feelings about the venue?
GD - King Tuts is not the biggest venue to play but when it is full, playing there is something else. From the stage you could see almost everyone in the crowd, kind of like a sea of heads, there's not a gap between them. The whole atmosphere and the history of the place makes it special.

I guess looking back the King Tuts Wah Wah Hut gig last month was even more special?
GW - It was a big night for us, more than a bit special and emotional as well. We played some new materiel including the new Banshee single, although the fans didn't know it would be the final Life on Standby show.
ED - It was a difficult decision not to announce our plans before the show. We wanted to make sure everything was in place so we decided to keep the changes under wraps until we were confident the time was right.

A final word from Life on Standby?
We'd like to thank everyone who has supported us over the years. It has been an absolute roller coaster ride and we could not have done it without you cheering us on. We may be putting Life on Standby to bed but it's not the end, it's the beginning of a new chapter and we hope you are as excited as we are. From all of us, thank you..the King is dead, long live Banshee .