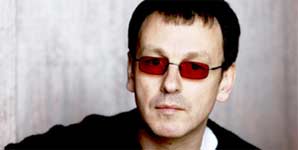 For the past 15 years or so, the Leeds musical craftsman; Mr. John Parkes has been like an aspidistra, never wilting and retaining shape, despite the pressures of music industry trends and falseness that lurks in the air like a noxious gas.

After periods in hardworking and earnest bands like Greenhouse, Fuzzbird and The Sinister Cleaners, John has found a welcomed resting place with Whole Sky Monitor. Such is his renewed vigour for song writing that he has just produced a veracious and swooning solo album 'Faithlessness. The amiable tunesmith has found the time to uncover the world of an honest and hardworking artist for our reading pleasure.

1. The blossoming of the Leeds indie scene has been well documented of late. How would you describe this scene; is it a community or is it very cliquey? How well do you fit in with it and what you think has been its recipe for success?

Shit! Unfortunately I kind of live in a hole. I occasionally get to see a band or solo acoustic thing but I didn't know there was a scene. This might sound like I'm just being arsey but I honestly don't know anything about any scene, though I also have no memory so can never remember who people are or where they're from. I'm quite friendly with the Wrath Records people and might nod at the odd other person – and I'm quite prepared to be 'claimed' by the beautiful people you understand, but I can't really tell you anything – sorry.

2. Your music is very accessible not just because of the well crafted melodies, but you seem to go the extra mile to ensure that people understand what you are about. For, example on your website; you dissect each song on your recent album 'Faithlessnessless' to reveal the meaning and inspiration behind each number, for your audience. Do you feel that artists in general should be more open and welcoming away from the mic?

Another difficult one. The tunes incidentally just kind of flow out and get joined to other bits. Wouldn't want to claim to be channelling from 'beyond the veil' or anything but its more gluing and sanding than crafting – or is that the same? Anyway, I guess I want people to understand but I have divided opinion on this. You can just know what someone is going on about without being told – and be completely wrong - so I should probably keep my trap shut and develop some mystery. So on the one hand 'never explain' is good advice. Bob Dylan was dead right. On the other hand 'artist' is usually shorthand for rude self obsessed wanker and people should occasionally be told to explain because it's just the polite thing to do. But then again, being Mister Friendly can be a strain – maybe that annoying arseole is just shy!

3. The topic of unrequited love is visited in '80 Years Old' and also in 'Darkness'. It is done in such a poignant and piercing manner that it would make Morrissey throw down his Marigolds in despair and stamp on them. Is it a tough subject to write about and even tougher perform these songs live?

Well you can't beat personal experience in the misery stakes. As Woody Allen said, the only kind of love that lasts is unrequited love. It does take a bit of distance before anything sensible (or just not awful) comes out. Writing songs like that is a bit like recreational grief. Playing live is different. Not very romantic but quite often I find I'm halfway thinking about something completely different when singing – or trying to remember the next line or something. I forget the words if I get too involved – a bit like reciting the Lord's Prayer at school or something, you're not really thinking of forgiving trespassers, just getting the words out. Thank you for the Morrissey remark by the way.

4. The political mantle is hoisted up and dropped at the feet of our esteemed leaders in 'To Go Around'. The song carries anger and bemusement shrouded in a delightful acoustic led melody. Do you think that political awareness is on the rise, partly due to the world's many problems and is it the role of a musician to try and promote political awareness?

I think political awareness should be on the rise but I doubt it is, people are too busy shopping - and too embarrassed to do the old political things anyway (demos anyone? – building a mass movement of the working classes? – just sounds daft). On the plus side, the NO2ID campaign might bite a few arses when the government start jailing thousands of us for not letting them sample our DNA for their database. People don't make the connections with the past, or with 'foreign countries'. If Stalin or China wouldn't or won't let someone travel abroad it's seen as oppression or clamping down on dissidents. When the British government won't let me have a passport because I don't want to be catalogued and tracked by the state for life I'll just be some mad bloke who's badly adjusted because he doesn't watch enough telly.

I think 'musicians' or lyric writers should say 'something about something' whatever that something is. Fair enough if its love or fairies or pizza but just something that you need to say. The fact is that you stacked up 'political song writing' against 'every other kind of song writing' it seems obvious which comes out on top – so I don't think music is a tool for class consciousness or anything.

In WSM there's more stress on the sound, less words and I guess more 'music' bits. Most WSM songs are based on a guitar riff or come out of the dreaded 'jamming', at least in part. I also often have to write words to a tune I / we've come up with which is very different to the solo stuff where the tune will often be stretched or twisted to fit the words. WSM are in the middle of recording the second album - bit by bit. We've started about 8 songs but there's still a way to go…I should also say that it's a band of four. I stand at the front and write the words but it's the band's thing, not just mine.

6. What was the last gig you attended as a spectator and does it feel strange watching other artists? Are you constantly making mental notes on their performance?

I think Donovan was the last gig I went to as a spectator. I sometimes feel like I can see through it all and so am not impressed – and then I just think wow! Donovan for example is a great guitarist and has really suffered for not being Bob Dylan which is unfair. I definitely make mental notes on performance. I'd make a great Svengali type manager because I always know what people are doing wrong! This doesn't of course mean that you can just do what they do. You can't just decide to be effortlessly cool or a great musician or whatever. Never hurts to feel in competition a bit though.

7. What do you want people to take out of your gigs and how do you want to leave them feeling?

A CD they've paid for!

That's also a surprisingly difficult question. I've always questioned the idea of music as 'entertainment' but it's really difficult to define it as anything else. I guess I want people to think 'he was good' and maybe 'hadn't thought of (whatever) like that before'. At the risk of sounding pretentious any really good gig or play or whatever makes you feel just a bit 'bigger' or more alive. Maybe a bit like they've had an interesting conversation with someone they've never met and wouldn't mind chatting with again?

8. Which of your songs sums up your current mood and why?

As I write it's the anger of 'To Go Round'. I've been working on my 'Glorification of Terrorism' song and getting kind of worked up, feeling I need to write 'protest songs' and if I could will a movement into being on my own. I'm working on songs that could get me arrested just to make a point. It's been a while since I felt the British government was attacking its own people and I wish people could be bothered to be more angry. Earlier I was contemplating Valentine's Day and feeling very separate from 'the majority'. Glad I don't care eh?


9. Certain media and press institutions, not so long ago, became entangled and fascinated in this so-called rivalry between The Bravery and The Killers? Come on, tell us, whose side are you on?

I've heard both names but as far as I know have never heard anything by either – told you I live in a hole. That's bad isn't it? Give us £100 a week to spend on CDs and I'll keep up, honest.


10. Finally, what has been the highlight of your 15 year careers to date (apart from this interview)?

The highlights are or course all in the future but in the past I guess it would probably be something John Peel related. So, doing a Peel session or hearing him saying 'that is just great guitar playing' (or something very similar) on the radio. Not very spectacular I guess but it'll do for me – for now. Some of the European gigs I did years ago were pretty good too…