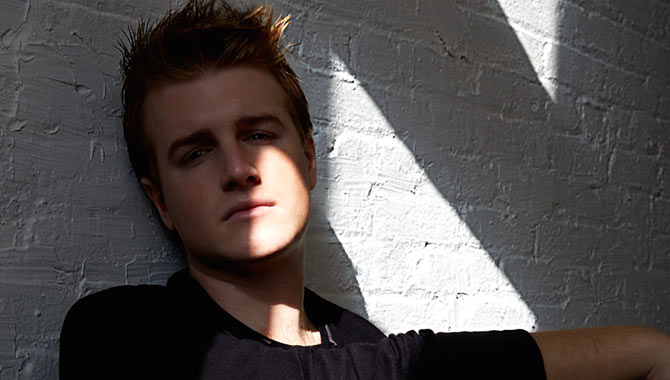 An interview with Jack Vandervelde

With a busy few months ahead we managed to catch up with new boy on the block, US pop recording artist, Jack Vandervelde. Currently on tour with Plain White T's for their 20 date University headline tour across America, Jack is quickly becoming an artist everyone seems to be hearing about.

Along with being personally asked to play for the President at The White House on Easter weekend he's also heading to the UK next week to support JLS star Aston Merrygold on 3 dates from 3rd May - 5th May in London. We were excited to speak to him about possibly supporting Harry Styles, Backstreets boys covering his songs and his super words of wisdom for the future.

You played at The White House for their Easter Roll show last weekend, how did that come around?
I got the call at 2am while I was in London. I have always been a big fan of presidential history and American history so to be invited to the White House was an offer I couldn't turn down. The Easter event is all about celebrating family and friends. What made me even more passionate about this event is that a portion of the tickets go to military and their families. None of this would be possible if it weren't for our military and their sacrifices.

You've been writing your EP in UK with Grammy winning writers, why did you choose to write/ record it in the UK?
It turned out to be where the opportunities were for me. I wrote and recorded my original EP in New York and it made its way into the hands of a few writers and producers in the U.K. who were willing to try a few sessions with me. The writing sessions ended up going really well so we just kept extending my stay. I will be back there in late May to finish recording!

What should we expect from the EP?
5 great new songs! I am influenced by so many genres so you can expect a blend of different sounds. My songwriting in terms of lyrics will be similar to how it has always been but the sound design will have a blend of my different musical influences.

You're currently on tour in US with Plain White T's and then with Aston in May, who would you next like to support?
I think supporting Harry Styles would be a lot of fun! He is just getting started with his solo career so I imagine he will be hitting the road. Also, I have been going to Taylor Swift's shows for years now and her opening acts are always amazing. It would be so cool to be a part of that summer tour she does! Let's hope she has some new music coming out soon.

Whats your favorite thing about being an artist?
I love that I get to wake up and make music. That has always been the dream so hopefully I can keep that going!

If you could perform with any past or present artists, who would it be and why?
I would love to perform with the early Eagles.the days when they were just getting started in California and Jackson Browne was writing 'Take It Easy' in their basement. The way they took on the industry doesn't exist anymore so it would be really cool to see what those days were like. Social media didn't exist in those days so it was all about getting out and playing and fighting for that lucky break.

You're still only young and early in your career but things seem to be going well, what's your plan over the next year?
The two most important things to me: Write more music and perform. I am fully booked until July either on tour or in the studio and I love that. I just want to make new music and get on the road to perform it.

If you could only do one thing, what would it be - Writing music or performing music?
That is one of the hardest questions I've ever had to answer. I love performing but I can't imagine performing someone else's songs, so I guess the answer would be writing music. I think I would rather watch people sing along to a song I wrote even if it wasn't me singing. I also spend more time songwriting than anything else so I don't know what I would do with all that time.

When you need cheering up what record will do it for you every time?
Anything Backstreet Boys or Green Day. Those take me back to when I was younger!

If a band covered one of your songs, which band should it be, and which song?
I think the two groups above! Green Day and Backstreet Boys. I grew up worshiping them so to see them cover one of my songs would be beyond amazing. It wouldn't matter which song! They can sing any of my songs and I would be happy.

Can you remember any words of wisdom, criticism or description that made you feel good about what you're doing.
I had a friend tell me once that "the only thing in life that is impossible is for it to beat someone who doesn't give up". If you don't give up, then life can't beat you. Also, Benny Blanco said that 75% of his songs end up in the trash. This helped me take on the attitude that not everything you do is going to be great but if you keep working, you'll get something good.

What are you most looking forward to on your UK tour?
To get out in front of a new crowd in a different part of the world that I have grown to love.

Catch him on tour with Aston Merrygold at the following dates:
May 3 Gorilla, Manchester
May 4 O2 Institute2, Birmingham
May 5 O2 Academy Islingon, London