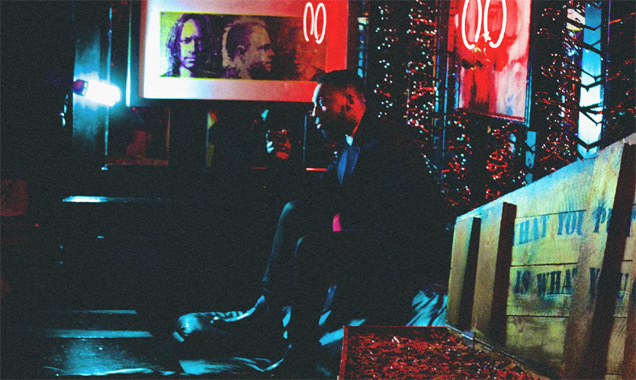 Being part of the music industry for just shy of a decade, J Warner has recently released his debut EP, 'Est. 1990'. When he took some time to speak to Contact Music about the release, Warner gave us a little insight into life in the music industry, the thought process behind releasing music, his connection to members of Disturbing London, and his secret desire to become a painter.

How's things, what's going on at the moment?
I'm good. I'm knackered because I've been doing back-to-back sessions but I'm good. I'm fighting through. I've just been working on some paid sessions with other artists on their EPs and I'm also working on an EP with a friend of mine, Blinkie, who produced 'CHILL CHASE' on my EP. It's kinda cool.

You've just released 'Est. 1990' - Tell me a little about it
It wasn't really planned, as such; I just made a couple of songs and as time went by I started to feel like it sounded different to all my demos and stuff, so I put them aside and started to build a playlist and that was that.

So do you have a favourite track on the EP?
There's something about 'Petals Fall', and that's why I put it to the end of the EP. There's a feeling about it. I think it's the deepest song I've written, when I think about the context, it really hits home. I wrote it after I had a dream where all these unrealistic and mad things happen, and then the voice of my mother told me 'At the end of the day, you're gonna go through things but it's not always the same result of everyone' - after I worked that out, I thought if I had to choose a favourite then it would be 'Petals'.

Is the name of the EP a reference to anything?
Yeah, it's a reference to me, really. I was born in 1990, I felt that everything I had heard throughout my life had inspired this sound. Looking at the soundscape of the EP, there's not one song in there that sounds like another. I don't know if I did that intentionally but I came to the realisation that being an artist growing up in London, you're exposed to so many different things. I grew up in the church and listened to a lot of Gospel music until the age of 6 or 7 and as time went on I got a hold of MTV and started listening to pop, and then I got to my teenage years and I discovered grime, so all these things came together and that was why I thought I had to call it 'Est. 1990'.

So far, the EP is out on free streaming services - what inspired the free release of it?
Personally I felt that it was my first body of work, and it felt right that I should just share that. I feel like the music industry these days is different, because you put something out and people hear it and want to know what's new. I also think about quality: when I first heard of Frank Ocean, it was when he put out his 'Nostalgia' project, and that was a mixtape or and EP at the time, but it sounded like an album. I think if you are someone who can make great quality music you should just put it out there and share it because that's the best way to build a following.

Tell us about your collaboration with Wretch 32
Wretch 32 is someone I've worked with for a couple of years now, I've been working quite closely with him on his next album. He's really encouraging and he really encouraged me to be expressive and keep pushing. I gave him the EP and 'CHILL CHASE' just grabbed him immediately and he wanted to be on it; I wasn't gonna argue because I think he's a genius. Then with everyone else, we've more or less come up in the industry working together and developing really good relationships.

Who are you really wanting to work with in the future?
There's a few. I definitely want to work with Labrinth, he's an amazing artist and he has a really great balance. From hearing my first EP, a lot of people will have put me in the 'urban' box, because people have to find a category to put you in, but I listen to so many different types of music, and I feel like Labrinth is kind of the same. Chris Martin or Tom Odell would be great too, I just think they're amazing with melodies and lyrics, and I think it would be a cool balance.

So if you had to put yourself in a box, what would you say is your style?
I'd have to create a box for myself. When I sat down with Wretch and played him the whole thing, he was like 'you can't really put this in a box - you'd have to say this was three dimensional music', and I don't mind that because I am quite a visual person. I see visual sounds when I create music and I'm always about weird atmospheric things or 'where are the ambient instruments?' or 'where are the weird samples in the background?' to make it cinematic. So I guess 'Three Dimensional Futuristic R&B'? Yeah, I'll go with that one.

Who was the most fun person to work with on the project?
I guess it would have to be Kojey. When he came down, it was literally the first time I had met him in person, and it was great. He's a really lively character -he's the kind of person that talks about making a song, and says 'I want it to sound like wine barrels rolling down a hill past a mermaid with ten elephants around her'. He says crazy things, but when he's sampling and tells you to 'do this' or 'do that' to the beat, you know what he's saying. He's probably the first person that I've actually been overwhelmed by working with. When he came to record the song that we've done, the verse was literally done in, like, two takes. I really don't know how he did it; put all of those complicated words together.

What about through the rest of your career?
Second to that I would say Wretch. He writes in his head - which I found really amazing - and at the first session I had with him he was getting in my face while telling me the lyrics that he was gonna be doing, but also walking and dancing around. I just thought he was so cool.

When did you start getting into the music industry?
I would say 18. That's when I got my proper manager who was quite focused and he made me write 117 songs in one year, which was a big learning curve. I would send him a song and he'd say 'I don't like that; write it again'. He'd send me an LP and ask me to write a song for it, I'd send a song back for a pop beat or something, and he'd say 'it's good that you've done this quickly, but this is not a pop song; this is an R&B song with a pop beat. You need to study pop and understand how they do it and to come up with harmonies'. That was a really big eye-opener for me. That was about 2008.

What's your favourite album?
There's so many, but today I'm gonna say Brandy's 'Full Moon'. She was the first artist that I heard that really changed the sound of R&B, the vocal harmonies made it really modern. It's inspired a lot of people today, cos I hear it in so many people's music.

What's a favourite line from a song?
It's a Labrinth song - 'Jealous'. I guess it's about a relationship with his dad, but it's so well written that you'd just think it's about a girl, but the line reads "It's hard for me to say, I'm jealous of the way you're happy without me" and it's great.

Name one skill that you wish you had?
I'd love to be able to paint really well, to the point where people would want to buy my paintings. I also want to travel and learn things about different cultures, a lot of people don't feel like they need to do that but I think it helps you as a person.

If you hadn't got started in music what would you have done?
I don't know what I would be. Perhaps I'd be a motivational speaker or something in that realm. I'd like to think that I'd help people do things. I'm very much into how people use their minds and what they're into and what they choose to focus their energy on so I'd probably get into that.