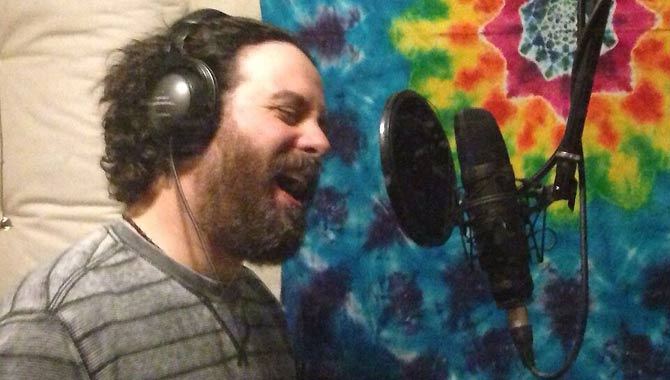 An interview with J Burn

J Burn has been a busy little bee. A few months ago, he dropped an EP called 'Burnt Blue'. And he just released a single, 'Shine', from his forthcoming album - 'Randomly Banded'. Contact Music tracked him down through his PR people and asked for a little of his time, hoping to sit down and chat. Burn said yes.
A few things became apparent during the interview: one, Burn has a sense of humor; two, 'Burnt Blue' is not indicative of Burn's style, it's more of a departure; at heart, Burn is a rock n' roller. And three, being an indie musician is a lot harder than most people think. And by the way, the cover of 'Burnt Blue' has got to be one of the coolest of the year. So it will be interesting to see what the cover of 'Randomly Banded' looks like.

Contact Music (CM): What is the most trouble you've ever gotten into?
J Burn (JB): Busted flat in Baton Rouge or maybe it was Arizona. Seems to have worked out. I was a troublesome child in school, liked to get a laugh and wandered the halls on the way to the principal's office, day dreaming, until they found me. Wouldn't recommend it.

CM: What are the five things you can't live without?
JB: I would have to say love, peace, music, my family and friends.

CM: What's your favorite song to belt out in the car or the shower?
JB: All the songs from old Walt Disney movies, especially the one that goes. "Chim chim-in-ey, chim chim-in-ey, Chim chim cher-ee! A sweep is as lucky, as lucky can be". Eternal child? Or just the influence of my son.

CM: What kind of guitar do you play? And why?
JB: Generally one that is in tune and has 6 strings but I can improvise. Seriously though, I have an American Strat which was modified a bit. A favorite is an old 1980 Gibson Deluxe, she might be marked as a second but there is no comparing. Found her buried, randomly, at a garage sale. That sure was a happy day. Most songs I write start on an acoustic, most often my Taylor 615 Jumbo. It's about tone and feel from the guitar. Guitars change over time, the more you play them the sweeter they sound. I consider my guitars old friends, sometimes you just feel like hanging out with one over the other.

CM: What musicians influenced you the most?
JB: That's such a tough question and I have so many influences, have experienced so much great music in my time. So with that, I will answer this as the most direct influence. That was my Grandfather, who was a first chair classical violinist in the Ohio symphony orchestra. Previous to that he had his own radio show and band outfit during the roaring 20's. He spent many hours trying to teach me, patiently, during my rebellious youth.

CM: In my review of your EP, 'Burnt Blue', I described your musical style as eclectic. How would you describe it?
JB: I can relate to eclectic it surely isn't the cookie cutter, formula driven music we mostly hear today. I would describe it as a collection of stories set to song in the Americana fashion. It's like four old friends sitting around reminiscing about their past.

CM: With all due respect, your sound closely resembles that of the Grateful Dead. Is this resemblance deliberate or just coincidental? Another way to put is like this: is it nature or nurture?
JB: Why thank you for the compliment. The Grateful Dead are true pioneers in the rock music scene and I am a longtime fan. As for it being deliberate or coincidental, when I sit down and write a song, I don't deliberately try to imitate a specific group or song. The song writing process for me is a personal journey into my own mind's eye. I think we are always building on top of our influences as those are the foundations we grow upon. That is my nature, nurturing my creativity.

CM: Has living in the Bay area influenced your musical style? If so, how and why?
JB: I would have to say yes. The psychedelic music from the Bay Area, from an array of many great artists, is one of my favorite sounds but that was before I lived here. However, living here has been key to me being able to take advantage of opportunities presented to me. Being here, I have met and been able to record music with many extremely talented musicians and engineers.

CM: Where do you find inspiration for your songs?
JB: My inspiration comes for so many different places. Past experiences, daydreaming, sometimes sitting on top of a mountain with my snowboard and other times it just seems to come straight out of the ether. Like a direct bolt of energy driving my brain to create, it's just there.

CM: Rumor has it that you have completed your full-length album, Randomly Banded. Stylistically, will it be similar 'Burnt Blue' or different?
JB: You never do know which way the J will burn. Burnt Blue was a collection of songs written, that I feel highlighted my Americana influences. Randomly Banded is more a departure back to my rock and roll roots sound.

CM: I have to ask, who plays the keyboards on 'Shine'? He/she is very good. Will he/she be featured on 'Randomly Banded'?
JB: The keyboards on 'Shine' were played by the very talented Jason Crosby. For folks who might not know him, he has played with Susan Tedeschi, Bob Weir and Phil Lesh, just to name a few. He is featured on 'Randomly Banded' playing Piano, B3 and Violin. He was also a key contributor on the 'Burnt Blue' EP as well.

CM: Was 'Burnt Blue' well-received by the critics? By listeners?
JB: I'm very happy with how it's been received by both the press and listeners.

CM: Will you be touring in the near future? If so, where? Just locally - in the Bay area - or outside the region?
JB: I would like to get out and do the live thing. It's a whole different kind of experience than the studio. We'll see where the music leads.

CM: It's presumptuous to ask at this point, but is another album on the drawing board?
JB: I am continually writing songs and always have motivation to do another album. Will the stars align? I can only hope so, it's definitely my intention. As an independent musician there are no free rides. It takes a lot of people, time and energy to come together to make a bit of magic and capture it.

CM: If so, when do you plan to go back into the studio?
JB: I am very excited to get back into the studio. I have already been talking with various collaborators about a few different projects for 2016. Looking forward to the New Year and want to wish everyone reading a Happy Holidays and a Happy New Year however you celebrate!