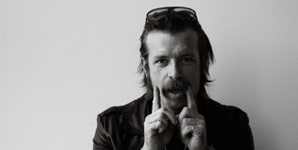 We caught up with Jesse Hughes of Boots Electric and Eagles Of Death metal for a quick chat before a recent gig at The Cockpit in Leeds.

You're 4 dates into your UK tour now, how are you finding it?
F**king awesome, it's the coolest sh*t I ever done. When we come to the U.K., the audiences are same as ever; beautiful sweaty and ready to rock. Elsewhere it's hard to compare anywhere to Australia, but in the States a lot of the time people just look up on stage at you like they're already bored. Here you get a fair chance, it's like 'you said you were guna rock so if you're guna rock let's see it, you've got about 10 minutes.'

What can people expect from your shows?
You can expect to see women getting impregnated every two minutes!

How did you find working alone on the Boots Electric material?
Making a solo record sometimes is just about being by yourself. When I'm making an Eagles album it's me and my best friend making an album having the best time of my life, when I was making the solo album it was me having the best time of my life without having anybody around to share it with.
That where I met Tuesday (Cross - girlfriend and now bassist for Boots Electric) and she helped me in the making of the record and she's the great love of my life. One the greatest barely legal porn stars ever put onto film and she retired just for me. So you guys can go to the Internet and look her up!

How did you find working with Money Mark (Beastie Boys, Beck) on the album?
Well I found that working with him made the most sense to me 'cause a lot of time what dudes are obsessed with, they are things that you would not consider. The first album that changed my life was Check Your Head by the Beastie Boys, which is a rock album, it's a hip-hop album, it's a punk album, it's all those things. I felt that my album was going to be all over the place, it'll be schizophrenic, so I thought I'd better get this guy to help me on it. I wanted Dr Dre, but I got the best instead.

Do you find that bands rely more on touring now than they have in the past?
The reality is that bands have always relied on touring; the record sales would just be a bonus I guess. Touring would be where you'd sell you merch and the way I've always looked at it is, and the way I've been raise because I was raised in a musical family is that the record should only be a promise of what the live show is going to be like. The music industry is an inevitable conclusion to something that was made many years ago. The standard that I've applied to Eagles of Death Metal and Boots Electric is that I want you to go home tonight and be like 'I want a moustache.'

You were late coming into music, how did you make the transition into the music business?
That's my favourite way of putting that question [laughs]. What happened was I went through a divorce, it was a really bad divorce and I got addicted to speed. A lot of people will stand here before you and try and talk sh*t about drugs but I'm not guna be one of those guys. I don't think drugs are for everybody but I don't think they're not for anybody.

You're quite open with your relationship with drugs, how would you define it?
The way I see it; you don't trust anyone who'd try and hide something from you. I don't like it when someone is high and they're trying to tell me they're not, it's just phony. I've played more shows sober than I will ever play high, thing is every situation is situational. Drugs, for example, don't disqualify you from something. I have a son who I desperately don't want to make some of the choices I've made, but I can now say it from a place of example.

A lot of your sound is very nostalgic, where do you draw most of your influences?
Oh man, where do I draw most of my influence from? Honestly I'll be at The Thirsty Crow where Eden (guitarist for Boots Electric) DJ's and he'll play a song like some weird rock and roll song from the sixties and I won't even know the name of the song but he'll play it and I'll just take instant influence. Like The Monks' 'Oh, How To Do Now' - listen to that song next to 'Complexity' and you tell me which one is which.

Do you listen to many recent releases?
I do yeah, but I've got like really weird standards. Just new for the sake of new and nothing else is not a good reason to listen to something. For me it's just got to be good and I think that we can all agree that a lot of good things took place between 1961 and 1985, but then 1985 to present you can count how many good acts have passed. Black Flag, Crass, even the Red Hot Chilli Peppers as much as everyone hates them. The record labels that started in the eighties like SST, Alternative Tentacles, Dischord; these things influenced me and I think I'm more influenced by their attitude than their sound. Also this has a lot to do with the way I make music, when I was a little kid every Sunday I went round to my grandpa's house to have corned beef and cabbage then afterwards we'd all sit around, pick up a guitar or mandolin and play some hillbilly music. So that's what I do in the studio, I give everyone a guitar, they'll all kinda know what's going on and it'll be intuitive.

Festival season is coming up; can we expect to see you back in the U.K. anytime soon?
[Hands over Leeds/Reading Festival poster] Main Stage, ready to lose. Eagles of Death Metal will be back.

So if you're playing Leeds with Eagles, does this mean we should be expecting some new material from them?
As soon as I'm back from this tour, Josh (Homme) and I are back in the studio and making a new record and I want it to feel like the world is being raped by John Holmes in the most pleasant way possible.