In The Black, Interview 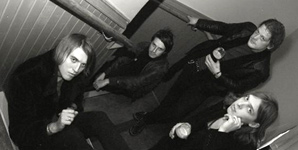 Interview with In The Black

A new decade usually leads to sycophantic polls and reviews of the music that's been on offer for the last ten years, followed rapidly by predictions from anyone and everyone about who we should be listening to and what direction the music scene will take in the next decade. Dull. We don't need to be told, we just need to be able to hear what's out there and make up our own minds, so we've been searching out some decent new music.

A band grabbing our attention at the moment is In The Black. Founded in Manchester, the home of British rock and roll, the now London-based four-piece seem to be on a mission to make up for bland, soulless music that has become the mainstream. In looks, lifestyle and most importantly, music, they are leading the long overdue revival of proper, honest rock and roll. And judging by reactions to their chaotic live shows and the glowing reviews of their debut EP, Iota; 2010 could well be their year. Contactmusic.com caught up with front man Jonny Kraska and bass player Mark Andrews to talk about the band, the current state of music and how they plan to change things!

Within thirty seconds of the interview beginning, it is clear that these guys are disillusioned with the majority of music out there today. 'Most music on offer to listen to today is just absurdly pretentious, just ridiculous music that does not mean anything, its fodder for children' says Mark. In The Black are adamant that there is no other band out there at the moment that can offer what they can. 'We're saying stuff that we think.we say what we feel, its just honest, you know and I think that's what people deserve' he continues. Jonny agrees, 'it's just honest rock. It's not so absurdly up its own arse that people are alienated against it. There's real emotion, real feeling, wrapped in a pop melody. It's a very driving sound, but it's essentially love songs played at a million miles an hour'. And having listened to the EP, that's what's so important about this band's music. Yes they are a rock band and they have a definite punk edge but it's the melodies that carry them through. That, together with the honesty portrayed in their lyrics makes their music accessible to pretty much everyone as Jonny explained, 'Everyone's just so scared of each other and their own emotions and I think our band just opens up our hearts to everyone and we're not scared of that'.

So it's not surprising to hear that as well as being influenced by rock and roll and grunge, they also cite bands such as Creedence Clearwater Revival and The Beatles; songs with real toe -tapping melodies which come through in their own music. And guitar wise, there is a definite nod to the post-punk era with echoes of Joy Division's' Bernard Sumner's style 'I like very brooding, lingering guitar' explains Jonny 'I've always liked that constant melody that shrills out. I suppose that's affected all the bands we've listened to. Prominent, simple style that gets straight to the point. Don't think too hard, just feel it and go with it.' On tracks like Iota, this is really evident; but the band certainly doesn't mimic, they have developed their own distinct sound by combining that love of melody with stomping bass lines and powerful vocals.

They describe their gigs as a mixture of fury and heart. If there's one thing you'll get from them, it's the feeling that they are giving you something very different. The passion and energy of their performance and the total belief in what they are doing is a refreshing change to the ten a penny indie bands that litter the live venues across the country, where crowds clap politely but never actually get involved in the music. In The Black are the sort of band that won't let you do that. 'If you don't like it you can fuck off' says Jonny 'but if you wanna dance, go on, smash a bottle, roll on the floor, come and pull my mic off stage, I don't give a shit'. Mark agrees, 'that's what we want from our live performances, we want chaos and we want people to wake up in the morning and think 'f*cking hell, I can't go and watch In The Black again for at least another two weeks, or I'm going to die'. And to be honest, I can imagine there are a few people out there who have had that exact thought!
.
I'm sure you get the picture now, In The Black are essentially a live band, their performance is something to experience, not just listen to. And the band are determined to capture this element on the recording of their debut album, due to start later this year. But their immediate aim is to ensure their music reaches as many people as possible. 'When you truly believe in something, all you want is for people to hear it. Stardom doesn't really matter. If we could change 100 people's lives in one way that would be worth it' says Jonny. So, In The Black's plans for 2010? 'Arouse and offend as many people as possible' says Mark. But to achieve their goal, their plan is to play as many gigs and festivals as possible this year, 'we'll play anywhere; we'll quit our part time jobs, it's time now, we're ready. I will drop everything and do it, I didn't come here to pretend to be in a band' says Jonny, and it's that level of passion and self belief that will make this band succeed. We're just looking forward to seeing what they do next.