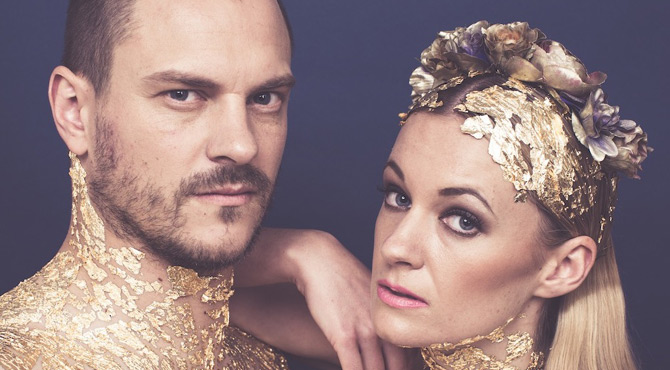 An Interview with Goldie Thorn

Electronic duo Goldie Thorn have already graced our digital pages with the video for 'Chrome Night', a track taken from their forthcoming EP 'Canal Life'. With a distinctly old school feel, they specialise in making minimalist dance tracks with mesmerising vocals. With 'Canal life', they've tried to capture the atmosphere of the East End, post closing time, an attempt to recreate the pulse of the city as a musical portrait. We caught up with Reverend Thorn and Gold & Chain to talk about it.

Who are you and where are you from?
We're Goldie Thorn, an electro duo originally from Melbourne, Australia, but now based in South East London.

When did you decide to move to the UK?
Five years ago - and haven't looked back since!

What's the scene like in London compared to Australia?
Melbourne has a hugely vibrant indie scene, with heaps of pubs, bars and other venues putting on live music seven nights a week.

Your EP 'Canal Life' is due out in September. Is there a running theme to the release?
Yes! We wrote the record with the overarching theme of life living on the doorstep of East London's canal in mind. Additionally, the title is a bit of a play on Grace Jones' 'Island Life' record, which we both love.

What prompted you to release on vinyl instead of CD?
Vinyl is having a moment - we've seen sales increasing year on year for the last few years.  We both love the vinyl format, and buy lots of records ourselves, and as DJs we pretty much only play vinyl. It's been a life long dream to put out a vinyl release!

What influences do you think we'll be able to hear in your music?
Hot Chip, LCD Soundsystem, Robyn are the obvious ones.

Who would you say are your favourite artists in London at the moment?
We love artists like Ali Renault, Bell Towers (a fellow Aussie expat), and London gal FKA Twigs.

What do you think about the purge on nightclubs in the UK?
Nightclubs are a great place for DJs to cut their teeth, and bands and DJs to make some money. London's vibrant nightlife is so much a part of the city that it would be such a shame for that to be threatened...

What one piece of musical equipment could you not live without?
Our Emu Sampler - we couldn't make any of our tracks without it.

'Canal Life' is released via Dreamtime Records on 25th September 2015. A bonus fourth track, 'Chrome Night (Faze Action remix)', will be available for those who buy the EP digitally.