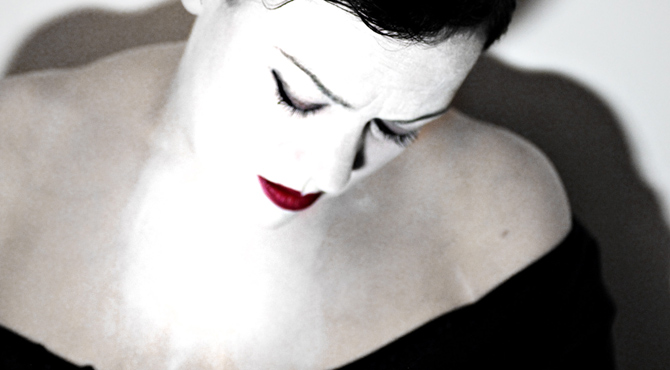 An Interview with Gene Serene

Gene Serene has had both feet in the UK and Berlin dance and Electro scene for quite some time. Her latest endeavour, her first full album, is 'The Polaris Experience' - a fully realised electronic concept piece that tells the story of two star crossed lovers and their journey across the galaxy. After listening to her breathtaking mediation on off-planet romance, we decided to catch up with her.

What prompted you to put together your first album after spending so much time as a collaborator?
It's not the first time I've pulled an album's worth of tracks together or even written an album, it is the first one I have released. I have always kept myself busy performing and recording, I had just come out of a 13 year publishing agreement, it involved lawyers and was quite unpleasant really. I found it disappointing to not have one track licensed in 13 years. Finally (almost) free for the first time to own, release and exploit my work was a way of saying "that was then and this is now". It allowed me to really focus on writing and recording for the first time in a very long time.

While I still collaborate and write with other artists, I wanted to do something more coherent, distinct and sophisticated.  I worked on a theme so I could realise the project from beginning to end and it could be listened to the same way as a film would be watched - more of a soundtrack to a journey.

Bob Earland helped write and produce 'The Polaris Experience'. How did you two end up working together?
I had the Clor album for 3 months in my car solid - and I thought this is possibly one of the best albums ever written. I love the keyboard sounds and so I hunted Bob down, I wrote to him and asked if he wanted to do something brilliant. I sent him my work - he liked it and it went from there... I think it was lucky timing for me really. I learned so so much, and still am.

Where did the story come from? Have these characters been with you for a while, or were they a lightning flash of inspiration?
The characters are all of us really, living in these and the near times ahead. I was shown the star polaris in the sky and told it doesn't move, I looked at startrails and they looked like a doorway to me, or a point of contact, and that was the spark, the concept - rather than 2 individuals there are actually 3 characters, a trinity of sorts. It's all quite archaetypal really.

There have been many serendipitous moments writing this where I turn on the radio and it had just happened. Science is fast, that's for sure. On the track 'Polaris' the lovers are being placed into suspended animation (by the 3rd character) and their blood is removed and they are filled with a watery light substance. It's a bit OTT, I thought, but it's fantasy... but then I read about a new medical technique used on battlefields and in terrible accidents where they have started doing just that! Removing the patients plasma but filling their blood vessels and arteries with saline solution! There were a few "visions" like that.

When I really started looking into the Mars One project, I was hit by the hard cold truth of leaving the earth for ever - that was massive! The thought of being laid next to your only human companion in space and time and not knowing if you are still real, if you are dead or alive, or what? I found the emotions and philosophies fascinating and open to lots of interpretation. Recently, Kepler have announced they have found an Earth twin, a planet that it takes several decades to travel to with twice the gravity of the earth. It's a given that NASA will go there - that it must be visited and populated. Really, it's all been happening.

The inspiration for this album have been manifold, not just the Mars One mission like so many people have picked up on, but also Raymond Kurzweil and his work on AI. It's incredible what one man is capable of really - what we all are capable of. As much as I am moved by Kurzeweil's thirst for immortality, I am infinitely moved by our beautiful planet and its own patterns and harmony. It's horrifying the sheer amount of toxicity we are creating with nowhere to put it. These poisons are going into our atmosphere and our water table. No wonder we're all getting ill!

One place I was surprised to find interesting was the whole transhumanist movement. The desire to join with technology, mix our biology with the circuit - they speak of the possibility to upload and store our life's memory, even download it to a new host!

All of this and much more made me write this album. There's no need for science fiction - science-fact has taken over.

From the sounds and story behind the TPE, it very much strikes us that there could be a visual element to the album. Do you utilise that during your live show?
Yes, very much. It's an experience and it's growing. I've constantly been collecting relevant images and ideas. At one point I drew the entire album to see it. It's all coming together.

So far, It's only been performed a few times, and it's really going to be as much about where it's performed as how. I try to work with the space and direct the mood accordingly.

Visually I have worked very hard with several people to try and capture what I see in my head. It's like an elusive dream sometimes and then - there it is, combining the idea and the work and the song and it's right. I need to do more of that - I enjoy it and there's still work to be done and rehearsals to be had with other people I would like to involve. But I am really happy - performing the album seems to really bring the whole story to life .

Being an independent artist in the digital age can be hard going, especially as everyone seems to have full time jobs. How do you find the time to create?
I am lucky in that I don't find the time - I just create naturally wherever I am. Ha! I think time is a finite thing. How we use that time and the demands on our time are dependent on many things. My concern has been the welfare of my daughter. Finding time to create as a parent is a challenge, but becoming a parent entails a lot of mind shifts anyway. I feel if, like me, you know what you should do and are best at then it's an important thing to continue to do, it's important to be true to yourself if you want the same for your child. They have to see what you're about and there's no point pretending to be someone you aren't.

Since my daughter arrived she's been my priority, she was diagnosed with a rare metabolic condition MCADD at 7 days old, so work of most sorts was off the cards for a while. There were some sessions here and there but really I pretty much stopped for 4 years. She was really quite ill as a baby and frequently in hospital. I stopped gigging and started singing jazz - formed a quartet, it has really saved my voice.

At that point I was forced to re-evaluate absolutely everything in my life. I have been honoured to have had that experience, but really it's only been in the last couple of years that I've managed to start stealing time back for myself creatively as she has grown stronger and better equipped to deal with infection and her condition.

And yes - it is hard going. It's a really tough industry now. Making music is easy, making your money is hard. It's really hard without the back up of a label, and really, like a zillion other artists, I would like nothing more than to have that, but I feel like there's no one out there who really gets what I do, but luckily I was born to do this.

Having said that, life is hard, and I also don't want to start changing my work to conform to someone else's idea of how it should be. Blake put it well when he said, "I must create a system or become enslaved to another man's".

I certainly can't let the fact it's hard stop me putting out my work. I may not fit into a mould and couldn't begin to guess where I fit into the music world, but I am getting really positive feedback about my sound and what I'm doing, and that encourages me to continue. I can only hope people enjoy it and find its differences refreshing.

How do you think you've changed as a performer over the years?
I guess it's like any skill, with practice you get better. More and more I am interested in the complete experience, not just my own performance but the setting and space. The sound the picture/lighting effects. It's not about getting the crowd to dance so much these days but taking them on an adventure they won't forget. I still enjoy club music and making wicked tunes and I really enjoy the electro shows I do as they are great fun - but I am an artist and I want to explore that in greater depth.

Are there any artists on the scene today who inspire you, people who just make you want to get up in the morning and start writing right away?
Tim de Laughter, Mini Mansions, Broken Bells.

How does the UK's live scene compare to Berlin's, now that you've experienced both of them first hand?
Honestly? I  wouldn't like to say. Perhaps having a long relationship with electronic music helps, Berlin and I have that in common. London is so austere right now - everywhere with any sass is being shut down. I guess that's something I will be able to better answer once I'm back from Berlin in August.

I think the live music scene is always amazing and tough in both cities, they are both large varied and complex. As an artist they have their pros and their cons. They have a lot to give.

Personally, right now I am really looking forward to playing live in America. There's the beginnings of plans for a tour there and that will be awesome I think.

Where do you plan to take us next? Will you be revisiting this concept, or do you have something new planned for the future?
The experience is just about there - while I am planning a few new things I want to spend the next few months playing the album out live in weird and wonderful places. I intend on adding more elements to the show as it grows.

I also am in the process of putting together a electro-pop compilation - and I have some new songs bubbling away in my computer. There's a couple of singles coming out before Christmas I've done - but really this is where I'm at right now. I'm not in a hurry to move onto the next thing - this has just begun and I want to enjoy it!