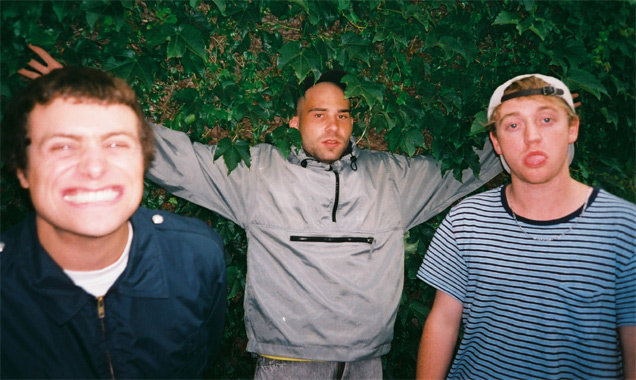 An Interview with DMA's

For years, DMA's have locked themselves away busily writing and recording around 50 songs before preparing everything for release. In addition to talking about their writing process, Johnny sat down to talk to Contact Music about their current tour throughout the UK and US, as well as discussing where they would like to perform in the future and what they do in their down-time.

Hey, how are you doing? What are you guys up to?
We're good; we're heading down to Brighton. It's cool, cos there's eight of us in a big car, but I think we're about an hour away.

When you first started out, you guys just wrote a huge amount for songs, having such a selection to choose from, was it hard cutting them down to the six tracks on the album?
Yea! We had about 40 or 50 and they've all got different vibes; some use a drum machine because we didn't have the kit to record drums, so some are a bit more electronic based, and some are a bit more garagey - a bit rock and roll - so when we looked at them we wanted songs that were in a similar vein to be put together and we thought about it in that sense. Some of the songs on the EP are five years old.

What was the particular criteria for the songs on there?
I think they're pretty honest songs, and we really focused on going back to the fundamentals of song writing, like lyrics and melodies and just three-chord songs. We want the EP and the album to show where we started and really be honest, and that's why we've been garaging because it's still something we're into. We actually finished the mixing for the album the day before we left as well, so it's nice that we got that in the bag. It's a step-up from the EP, but it's still got all the rawness and the guts.

Now that you're out in the public eye, do you think it's important to be so proactive with writing?
Yeah, it is man - well, that's one of the reasons why we wrote so many things because you could get left behind, and we were always very conscious about that. But it comes in droves - sometimes you'll just pump out three new ones. The way we write and record with a drum machine means we can chop it all up and listen to it, but that can make writing hard whilst on tour as we don't have all that set up over here.

Have you ever written a song, loved it, and then come back to it a few months later and not liked it as much?
That happens all the time. Normally in that way, it's kinda cool, you come back to it. When we write a tune, we start it in the morning, finish it, chop it up, have some fun with it, and then email it to our manager. We'll just chuck them in a bank and come back six months later and our manger will be like 'oh, what about this tune or this demo that you did here?' and there are some parts that we think aren't really that cool, and then there are other parts that are really great. Then you can maybe chop bits up together, or maybe you've got another song since then that works hand-in-hand. It's good to be surgical and take the time to do bridges and pre-choruses and chord-progression before the rift, because it keeps it all cohesive.

How excited are you guys about finally releasing this stuff to the people?
I dunno, man. I think you've just gotta take it in your stride. I'm curious to see how overseas markets take to it, because America and the UK are pretty different to Australia.

You're currently on tour in the UK - is this your first time over here?
No, we were here a few months ago. We did a support show with The Corteeners which was a really good laugh, they're good lads. It's a very comfortable way to play your first shows, but it was very nice to do that and then come back to do some of our own shows and play some dingy clubs again.

Are there any particular sights you're wanting to take in when you're off-stage?
Yeah - Shake Shack! It's a burger shop, which was pretty cool. But honestly, we haven't really had a lot of time and it's all pretty constant, which is nice. We're thinking of moving here in 2016, so it'll give me a bit more time to understand the city and see some of the sights. I came to London when I was younger as well, when I was about 19, and I did all that stuff then.

When you say you're thinking of moving here, is that a permanent relocation?
Obviously there's lots of variables, but it's definitely a thought process. It would make it easier with meeting new people and heading out on the road. It's nice that from London, New York is, like, an seven-hour flight away.

What was it like last time you were in the US?
It was brief, but it was cool. I had never been to the states before, and we only went to LA and New York. New York was crazy because we had five or six gigs in a row and lots of meetings with people. We were in the states for maybe a week and a half? I'm excited to go back and check out cities around the West Coast like San Diego, San Francisco, and the we're also doing some places like Columbus that I would probably never go to unless we were playing shows.

Where in the world would you most like to perform?
Spain. I'd love to play there, cos we've got some mates who've played there and they said it's incredible. I hear Montreal is pretty great. I'm looking forward to playing at the cities where I have no idea what they look like, like Chicago or Toronto. I think there are a few places like that which will take us by surprise.

You mentioned earlier that some of your songs are around five years old - how long have you guys all been together?
Me and Tommy have known each other for a fair few years now, because when I was 18 I joined a band with him and he was the drummer - that's how I met him - we didn't know each other that well, but that's how we met. Some of the songs we had done before we met each other, in that same idea of being able to dig up old demos and reinvent them to what your flavour is at the time. A tune is a tune, and it's just the production aspect that's a different kettle of fish.

What is your writing process?
It's different every time, man. I think the best ones are the ones that the three of us have pumped out together. A lot of the time, someone will bring one idea in and from that core idea you can build things around it. We all think of music differently as well; we've all got our pros and cons, and that's why I prefer the ones that we've all written or the ones that I haven't written.

Do you all have a similar taste in music?
To be honest, we all listen to everything. We don't just listen to one genre, but when we were first getting into it, I guess I was more into folk like Dylan and Neil Young growing up; Mason was listening to more American guitar bands and Tommy grew up listening to lots of Stone Roses and Oasis and stuff like that. Then as we got older there wasn't one thing we listened to. But in Australia, there weren't many bands doing that sound, so all of our friends were into a load of different things.

So was it difficult to spend so much time working on all that material?
Nah man, it was just fun. I was just getting into recording and engineering and we were all learning a lot and we were quite prolific at that time. Not to talk it up, but we were just pumping out heaps of tunes because we didn't care and it was really raw. Now we come in to track the album and start feeling like a bit of a lazy pr*ck, because we used to be writing and recording every day and you think 'I haven't written a new song or done a new demo for a couple of months', and then you realise that it's because you've been tracking the album - the whole reason you did all that sh*t in the first place! I look at someone like my little brother, who's about 4 years younger, and he's where we were about 3 or 4 years ago, where every day is just writing and recording and making 3 or 4 new tunes a week. The main thing is that when we do go back into our writing cycle, we can just turn it back on straight away.

Were there any disagreements with you guys having so many so many music ideas while writing?
One of the main things was that we didn't argue a lot, and one of the reasons we kept it as a 3-piece for so long was that we didn't want it to get too convoluted - we didn't want 5 or 6 people there chucking in ideas and complicating the writing process. It's cool that we're all on the same level, and we're very honest with each other. We're not scared to say that we didn't like that part that someone came up with, because it'll hurt someone's feelings or whatever.

What do you think the future holds for you guys?
Someone said to me one time, 'there's no right answer in the music industry - you never know what's gonna be right or wrong', so you just don't think about it. There's no point aiming for a future that doesn't make any sense. Don't overthink it and just have fun.

You're on tour at the moment, and you're album comes out soon - what's next for you guys?
I think it's just gonna be a big long touring cycle. We're gonna be here for the next four months, then we'll try to get a month off, then we'll try to get back to Australia for a bit and do a few shows. And just keep bringing new songs into the set as well as we get closer to the album cycle, cos we're still playing lots of the EP tunes at the moment, but we're working on some that will actually feature on the album which is coming out soon.