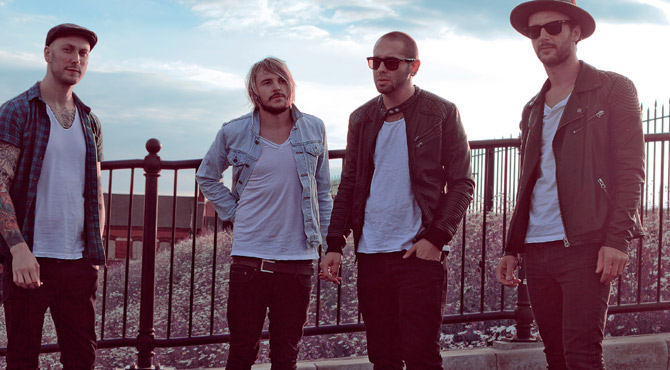 An Interview with Denim Snakes

Denim Snakes are a rock band full of passion. Hailing from Barry in Wales, the boys have created a sound so explosive and beefy it will literally blow you away. With their latest single 'Stronger' coming out in August, we had a chat with the lads to see what they're up to in the meantime.

The music has a distinct 80s stadium rock feel about it, are you influenced by that time/genre?
Most definitely. Not just the 80s though, we listen to music from all eras and genres. Playing a stadium would be awesome though!

How did you all meet?
Russ and myself (Jake) met in our local pub while Russ was on a date and discovered they both loved music and creating music so they got to writing and recording some demos. Russ and me had known Matt for quite a while and asked him if he would like to play bass for us and he was well up for it. We met Tom shortly after putting out some adverts online and posters up in a rehearsal space, we had a jam with him and knew straight away that he was the last piece of the puzzle!

What is the single 'Stronger' all about?
Russell wrote it after a tragedy happened to him which led to the break-up of his relationship. It's about staying strong and never giving up on love or life.

What influences you musically?
We all love different things musically, but I think mainly for us we like melody and hooks.

What are your plans after the single?
We have another two singles to release and another album on the way!

What can fans expect from your live shows?
Our live shows are very energetic, sweaty and fun! We want every one to party with us!