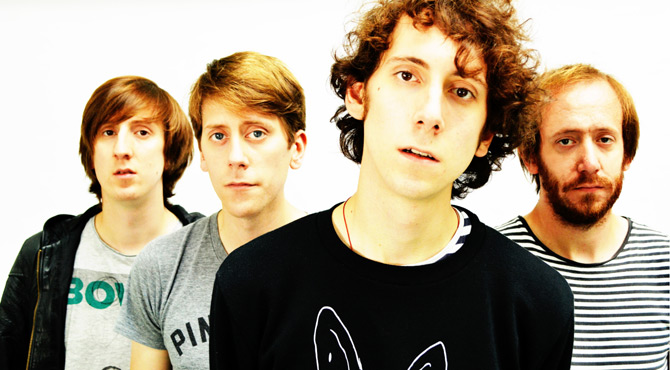 An Interview with Ded Rabbit

Ded Rabbit are four brothers oozing from all sides with classic indie-rock goodness. Since moving to Edinburgh in the late nineties, the quartet have released three albums and had their T in The Park debut this year. The boys caught up with us to talk about their latest EP 'Moving in Slow Motion' and their plans for the rest of 2015.

Who are Ded Rabbit and where are you from?
Ded Rabbit are a four piece Alt rock/Indie band consisting of four brothers; Eugene (vocals, rhythm guitar), Fergus (lead guitar), Donal (bass) and Eoin Gaine (drums).

Originally from Yorkshire, we moved to the Highlands in 1996 and through the isolation and a developing love of music, we started playing together about ten years ago. After moving to Edinburgh to study, we began taking music more seriously and recently feel we've started to find our feet in the studio; working on the last three EP's in Glasgow with Rocket Science Studios, who have recorded Texas, Belle And Sebastian, Dougie MacLean and many more.

You're originally from Yorkshire but why did you decide to move to the Highlands in Scotland?
Our parents decided to move up back in 1996 so it wasn't our conscious decision although we loved it. In our teenage years we could play music freely to the early hours.

Now you're in Edinburgh, what's the scene like compared to Yorkshire?
As we were kids when we moved up we can't really say. Edinburgh, however, seems to get a lot of bad press for its scene but our gigs are always packed and most the gigs we go to seem to be pretty rammed so maybe it's more of an attitude thing.

Your EP 'Moving In Slow Motion' is out now - are there any themes to the music?
This EP is the last of a collection of 3 EPs we've released over the past 6 months and feel a common theme throughout them all is human emotion and personal experiences. We've always been keen to write about or emphasize personal experiences or things that are happening in our lives.

The four of you are all brothers - what's the best thing about being in a band of brothers?
An undeniable, musical connection and understanding of how each brother works. Being able to all get drunk in the back of the van when our dad is driving!

And the worst?
When one of us falls asleep on tour the pictures are quickly online.

How is your new EP different from the last?
Musically and songwriting wise we feel we've been progressing steadily and this EP seems to be one we're most proud of.

What are your musical influences?
Led Zeppelin, Hendrix, The Beatles, Queens Of The Stone Age, Fugazi, Ian Dury and the Blockheads, Gang Of Four, Interpol, The Cribs, The Libertines, Cream, The Mars Volta, The Red Hot Chilli Peppers, Liquid Liquid, Sonic Youth, Pixies.

Who are your favourite Edinburgh based bands at the moment?
It was The Cribs before they moved to Portland.

Where can we see you live next and what can people expect from the live shows?
A good time! "Undeniable stage presence and performance skills"(-)"An exciting live band that will appeal widely and who are definitely festival-ready" - David Balfour, Record Of The Day.