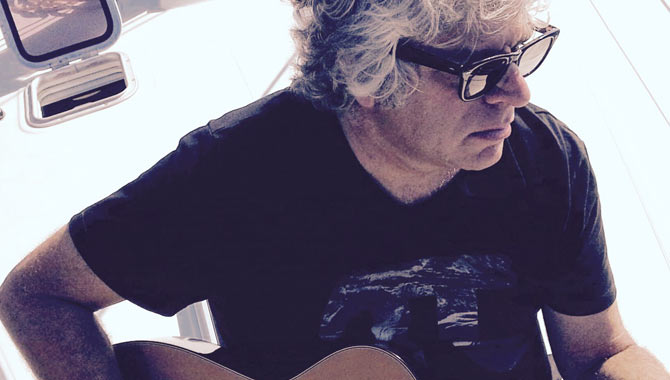 An Interview with Daniel Grinberg

It's funny how things work out. Born into a non-musical family, where Mom was a C.P.A. and Dad was an attorney, the kid grew up to eventually release an Indie Pop album. And a darn good one. The kid's name? Daniel Grinberg, who after three decades in the arena of hi-tech made one of those massive life changes that a lot of people would like to make, but never do. Grinberg loved music, always had. So one day he simply decided to do what he had always wanted to do - make music. Not just play music, but actually compose and arrange and produce an album.

The album is called 'Short Stories'. And it's not just good, it's more: it's good in a different way. Indie Pop music that's distinctive enough to stand out from the crowd, but commercial enough to have a shot at achieving popular acclaim. 'Short Stories' has two things going for it: Grinberg's melodies and a female vocalist named Alex.

Intrigued by the whole frog-into-a-prince scenario or in this case geek-into-a-composer, Contact Music contacted Daniel and asked him if he'd be willing to sit down and talk a bit. Luckily, he agreed. Grinberg, who is middle-aged, exudes a little bit of the "mad scientist" aura. He's intelligent, yet disarmingly charming, while at the same time elusive. For example, it would have been nice to learn more about Alex, who she is, where she's from and why the reticence about her.
Here's the gist of the interview with Daniel Grinsberg.

CM: What is the most trouble you've ever gotten into?
DG: As a child and teenager I was a terrible student and it got me to a lot of trouble. I hated school and school hated me. Avoiding teacher's anger and humiliation was sometimes hard, but I was a tough child, not afraid to fight back. In high school, a teacher accused me of smoking grass at school, which was a lie. I was expelled for that from school.

CM: What's your favorite song to belt out in the car or the shower?
DG: U2 - 'With or Without You'

CM: What kind of guitar do you play?
DG: A Fender Custom Stratocaster.

CM: In my review of your album, 'Short Stories', I describe your musical style as Indie-Pop. How would you describe it?
DG: Indie-Pop is fine. I believe my style can be described also as melodic rock or Pop-Rock. It's may be a matter of perspective.

CM: After working in the world of high-tech for so long, what made you decide to return to music and record an album?
DG: I never stopped making music, but since I made a living from high-tech, which I enjoy and gives me a lot of satisfaction, music remained a secondary activity. But the desire to create an album was there all the time. The trigger was meeting these young and extremely talented performers willing to collaborate with me.

CM: Where do you find inspiration for your songs?
DG: In life. Things that happen to me. My relationships with people around me. Memories from my childhood. Thoughts about the essence of life. Conversations. Sometimes things that I see in the news. Human suffering's influence on me.

CM: Rumor has it that you're already working on your next album. Stylistically, will it be similar to 'Short Stories' or different?
DG: Yes, I started working on my next album which I intend to be more basic than 'Short Stories' in the areas of production and sound. More of a personal touch. More freedom of interpretation for the musicians playing with me.

CM: I have to ask, who is Alex, the female vocalist on many of the songs included on Short Stories?
DG: Alex is a beautiful person in every way and a great artist. She is very young - 25 years old - and she just finished producing her own album which I think is great. I will assist her in promoting it as much as I can.

CM: Alex has a remarkable voice. Will she be part of your next album?
DG: Yes, of course. Generally speaking, I see the collaboration with Alex and the other artists who participated on 'Short Stories' as a process of artistic growth that I mean to keep developing. I enjoy it a lot.
Randy Radic