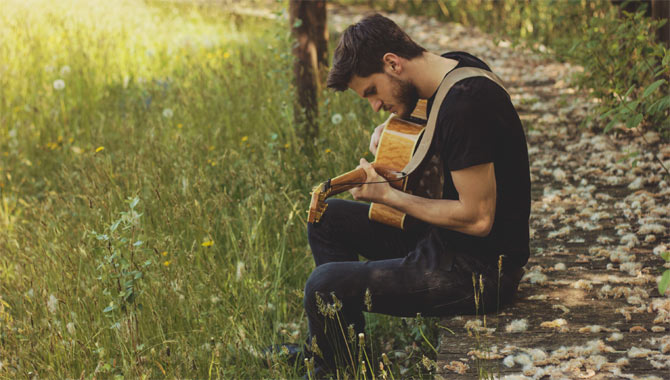 An interview with Damien McFly

Damien McFly is an Italian singer/songwriter with an ear for full bodied, beautiful sounds. His latest single, 'I Can't Reply', is an unplugged multi-instrumental love song capturing that poignant feeling when, overcome by beauty and self doubt, you find yourself lost for words. We decided to catch up with Damien following his single's release.

Hey Damien, can you introduce yourself for us?
Of course, I'm an Italian singer songwriter from Padova. I perform as much as I can and I'm dedicating all my  life to music.

Tell us a little bit about your latest single 'I Can't Reply':
"I can't reply" is both a romantic and hopeful song. It's about being brave and not shy not only in love related situations. Sometimes making the first step can create beautiful unexpected reactions in people.

Musically speaking I wanted the song to be simple at the beginning but the sound gets bigger and harmonically richer in the bridge and in the final chorus.

All the instruments are unplugged on the single, what made you decide to create that particular sound?
After playing in many projects in the last few years I decided to give my solo project a very recognizable sound. Unplugged instruments played with a powerful and almost rock attitude.

I recorded the song inside an old Italian Villa in Padova. I love the sound that I've reached. Those old walls made every instrument brighter and "bigger" at the same time.

You're also a sound engineer, how did you get into that field?
As I finished high school I was already playing and engineering some bands live and running my small recording studio. I was not sure I could made a living out of music but I knew there was nothing else I wanted to do in my life. So I attended the sound technician course in the conservatory of Padova and after graduation I followed some bands on tour around Italy. But playing became soon my only wish so in the last two years I've kind of abandoned live engineering and played like 200 gigs.

Can you talk us through your songwriting process?
I usually write music and lyrics separately at the first stage. Every time I jam with the guitar and I find a good riff I record it on my phone, then record a draft version in the studio and put some random lyrics. My "problem" when I write the music part is that I love to produce the song and find the parts for all the instruments. But I think that helps me to find the best words for that song.

About the lyrics part, I usually write notes on my phone. I don't like to start from a topic and write, I don't think it's a natural process. I like music to be the soundtrack of the specific moment I'm leaving, whether it is good or bad.

Who are your main influences?
I think Mumford and Sons had a lot of influence in my writing process, I love their simple and direct sound. I love Ben Howard too cause I feel like he doesn't want to fit in a specific genre or category, he just writes beautiful songs with a personal sound.

How did you get into songwriting?
I started writing music when I was 14. But when I was 16 I wrote a lot of lyrics and started recording songs on my own with my brother computer. 90% of the songs were about my young broken heart and were not that happy, but we need to start from something right?

Where has been your favourite place to perform so far?
I played in many countries in the last two years, in Italy I usually perform with the entire band (mandolin, double bass, drums) but outside of it I performed with just the mandolin player or alone. I have a great memory of my first US performance, at the Reggies Pub in Chicago, I was alone and excited as a child on his first gig.

You've played a huge amount of gigs all over Europe of the past few years, which country would you say has the best crowd?
I made a small European tour on April around France, Belgium Germany and Netherlands. It's a good fight between Dutch and German crowd. I think Holland people surprised me a lot.

What are your plans for the rest of 2015?
I'm playing a few gigs in the UK at the end of July. I'm releasing my first original album in August and I will perform in Slovakia for the first time on August 22nd.

I'm really excited about the album release and I hope many beautiful things will come with it.