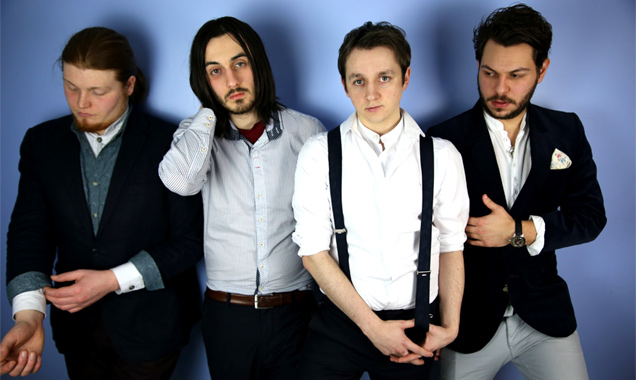 Clockwork Radio are preparing for their debut album 'No Man Is An Island' out in September 2014. They're already impressing radio DJs up and down the country with their upbeat indie sounds and are ready to fly the flag high for a new wave of indie bands coming out of Wales.

Contactmusic: Tell us how you guys got together.
Clockwork Radio: Well, Rich and Iwan were working on music together back in Wales and trying to book shows, sending out demos and managed to get a bit of airplay on Radio 1 and Radio Wales. Then they decided to move to Manchester so they could get a band together to play some of their early work. At the time it was pretty tough in Wales to get gigs as there aren't many venues, especially up North, so you have to travel 3 to 4 hours down to the South, usually to Cardiff, to get any shows.

After a period of trying out different musicians, the band met Dan and Sam through a mutual friend and from there we started touring and recording together. Since then we haven't stopped.

CM: You've played a lot of different venues in and around Europe - what was your most memorable experience?
CR: There are some many highlights; playing on a club rooftop in Germany and other weird venues including a Canal boat and the smallest venue in Germany, people dancing the conga dance during a set in Holland, playing for what we believe to be the Mafia (can't really go into detail about this). Of course, the festivals and the majority of shows seem to be great out there.

The last few years, we've always managed to have a gig abroad on Dan's birthday so that always proves memorable. This year, a sweaty French crowd in a basement did the honour of singing 'Happy Birthday' to us, the year before we had a gig followed by a 'May Day' celebration in Germany, Dan had 'Happy Birthday' sung to him by an Oompah band.

CM: What are you guys like live?
CR: The gigs are packed with energy, dancing, sweating and bad jokes; we kind of get away with it because I don't think the people can understand what Rich is saying.

We try to get people involved and make it more of a collective thing, rather than just a band playing songs, you know? So, yeah, trying to get people dancing, singing, interacting and just having a good time, that's our goal.

CM: What is your forthcoming album 'No Man Is An Island' all about?
CR: I guess the theme of the album is about humanity and honesty, it's something we kind of carried on from the 'Ubuntu' EP we released in 2012.

It's all about people working as a collective, just purely for the passion and love of doing it not for money or ego. It's something that's come from touring where people are so generous and warm, they have a massive love for music and supporting music. It really shows you that there's a lot of good out there.

The aim of the album was to try and capture the live sound we have developed whilst on tour. We opted to go into a studio for 2 days rather than a week or so. The result, we hope, is an honest, raw and energetic record.

It's something we're planning to carry into everything we do with the band, working with other artists and bands, all of us working together without the usual competitive stuff going on. It's really tough for musicians/bands/artists now so I think we need to work together to make things happen.

CM: What's been your biggest success as a band so far?
CR: As an independent band, our biggest success so far has been touring. It has enabled us to travel and share our music with a wider audience. The people we've met along the way really make the tours and we have so much fun staying with fans and exploring new cities with new friends.

We have complete control over the music we make, all the artwork is pretty much done inside the band as well as all the releases and everything that goes along with that. So I think to still be going and have all of this under our control is a huge achievement, especially with how disposable music has become and how little money there is to promote new music.

CM: There's an abundance of brilliant Welsh bands at the moment, can you tell us who you'd recommend?
CR: Yeah, for sure! And also some great people of old still doing great work, Gruff Rhys for example. One of Iwan's school friends from Bangor 'Koreless' is doing amazing stuff at the moment, people like Thom Yorke are raving about his work.

We//Are//Animal are one of my favourite bands, I think they're just recording an album that I can't wait for. Our friends play in a pretty cool new project called Afal Drwg Efa, kind of crazy electronic/guitar music over old Welsh poems being recited over it. There's also a big collective of Hip Hop guys that are all doing great music, Mr. Phormula, Dybl-L and the that whole crew are pushing that side of things.

Yeah, there seems to be a lot going on, it's great.

CM: Coming from Wales, do you find it hard as a band to be heard above the rest? How do you think people view the Welsh scene?
CR: I'm not sure really, we've never really been part of a 'scene' anywhere to be honest, we've just gone our own way and done our own thing. Which has sometimes made things harder.

I know from playing in bands in the past that Wales can kind of be closed off to the general outside music world but there's a lot of good Welsh language music out there. I think it would really benefit from some new nights and promoters so things aren't as centralised around Cardiff but it's really hard these days without money or with so few people going out to support live music.

I don't think it's any harder for us than it is for other bands though.

CM: What are your plans after the album?
CR: We'll be back on the M6, gigging around the UK and Europe first of all. We're going to try and get to as many new places as possible; New York, Austria, Spain, Italy and anywhere that will have us, as well as trying to push things in Manchester and hopefully do more shows back in Wales.

We'll be working on new songs, videos, artwork and hope to start working with more bands/artists/videographers around Manchester. At the moment we have plans to do some split releases and tours and really try and get some momentum and find ways to get all this great music that's been made by a bunch of bands to more people.

CM: Can we expect a tour anytime soon?
CR: Yeah, September when the album will be released, that will hopefully be a few dates in the UK and a few in Holland and hopefully more places.

Then we'll have some album launch gigs that we want to make a little bit special. Most the dates will be announced shortly and will be up on our website.

CM: If we had to listen to just one Clockwork Radio track 'til the end of time, which would it be and why?
CR: 'The Balance of Water' for me is my favourite off the album. Lyrically, I think it's one of the best we've done. For me, it can be interpreted in so many ways, and it's so chilled out and also has the Rhodes on it which just sounds amazing on that recording.