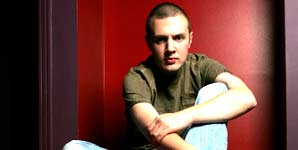 Q: First things first, just a few months ago you had a "normal day job", now you are flying around the world, appearing in your own music videos and releasing killer tracks that everybody is talking about. Can you describe how it all feels?

A: It is bizarre. It is something I have been working towards and dreaming of for as long as I can remember, and now it is happening and I don't think it has properly sunk in. When I was employed I was waking up at 4am to work, doing a shift then doing the same in the studio til stupid o'clock, then start it all again the next day. I worked so hard then, and now I don't have a normal job I think I get even less done! I think I should get into the habit of setting my alarm clock again, just not as early as it used to be.

Q: Has there been one particular moment in previous months that really stands out?

A: There have been lots of great things happening, but I think the main thing is getting changes signed to Universal/Apollo. I never imagined having a track cross over into the mainstream, but non the less, something I am enjoying, and it has so far opened many doors for me

Q: What do you think has been central to your success so far?

A: Probably because I have tried to form my own individual sound. I've been producing for quite a few years now but something seemed to click 18 months ago and I think I found the sound that I was comfortable working with. I just go in the studio and write tracks for fun. I go away each weekend now DJing and I can't wait to get back and write something new for my next gig

Q: Your track 'Changes' has received fantastic feed back, even Fat Boy Slim has been playing it! It's been in DJs boxes since last year and is now getting released on major label Apollo, did you think it would be so popular?

A: No way. Don't get me wrong, when I wrote it last August I was super excited! I finished it and sent it straight to Desyn Masiello via Messenger, and we both had a bit of an excited moment. He put it on his balance comp that day and signed it the next, and at that point I was excited I had written a track that would get me recognition in the house circle I was used to working in. I felt that was my major deal signing to Alternative Route at the time. I suppose in a way it was true huh!?!

Q: Who is remixing the 'Changes' ?

A: Dirty South, Funkagenda, and one more remix to be confirmed.

Q: Tell us about the video to the track?

A: Ok, not my forte describing films, but I will give it a crack. It is a film showing different stages of a woman's life, from a child to old age. I am really pleased with the way it has turned out and the production team have done a great job. If you blink you will miss my cameo appearance though.

Q: Are you going to be making a follow up to 'Changes' any time soon?

A: I haven't gone in the studio trying to write a follow up. I am just writing for the sake of writing, and if something come's good, then it can be used as a follow up if Universal want to take it. Failing that I will be continuing my releases on Rising Music - sorry. Cheap plug)

Q: For those not yet familiar with your DJing, how would you describe your style?

A: I suppose I try to play all styles of house music. The music I play is usually quite dirty, with energy and musical movement. Does that make any sense at all?

Q: Your label Rising Music is doing well, why did you decide to start up a label as well as taking on the roles of DJ and producer? What's next for Rising Music?

A: Rising Music was only setup as an outlet for my own original productions when I joined 24 Management. I don't think we quite expected it to be so popular and we decided to start signing other peoples records as well as putting my own releases out. The next release on the label is a new track by Sebastien Leger feat Gia Mellish - 'Hypnotized', which I have remixed for the flip. After that I have a new collaboration with the amazing Micky Slim coming, called 'Shake'. A very cheeky slice which I think sums up both our characters! We have also setup Rising Trax, which will only feature tracks from other artists. The first release on this label is a little dancefloor Gem by the Russian DJ/Producer DJ Grad called 'Piano 99', with the most ridiculous remix by Noiz, again from Russia. Trust me, you have never heard a breakdown like it, and have been driving my crowds mental for a few months now.

Q: What have you got coming up in the next few months?

A: Well apart from the releases I mentioned before, I have a few remixes forthcoming. I have remixed Axwell - 'Watch the Sunrise' for Positiva, out late August, Lifelike & Kris Menace - 'Discopolis' for Defected, out September, and of course, 'Changes'.

Finally, how do you feel about Pete Tong saying you are "the best thing to come out of Scotland since Mylo"?

No offence Pete its much appreciated but you must be mad! ?