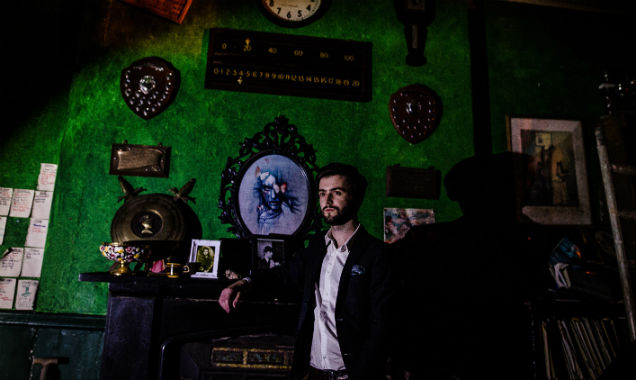 Charlie Barnes isn't just a musician, it's a band and a signature blend of coffee. He also might just be the next big thing on the prog scene, as his/their (it's hard to know which one to use) debut album 'More Stately Mansions', and latest track 'Sing To God', has the complexity of sound that can only be achieved by complete mastery of an instrument. It also helps that it was produced by the legendary Steve Durose of Oceansize. We caught up with the man, Charlie, before he set off on a tour of the UK and Germany.

Contactmusic: Hi Charlie. How are you doing today?

Charlie Barnes: Hello! Very good thank you. I just got back from work and when I finish answering these I'm going to get my dinner on and probably watch last week's episode of 'It's Always Sunny in Philadelphia' 'cause I need to catch up.

CM: How did you get into music?

CB: Queen's Greatest Flix 1 VHS, and family caravan holiday mixtapes made up mostly of Jim Reeves and Elvis. I started playing guitar properly aged 12 and haven't looked back since.

CM: Can you tell us a little bit about your new album 'More Stately Mansions'?

CB: It's a pretty tough one to sum up really. It goes from solo piano and voice to widescreen wall-of-sound guitars and choirs, and covers quite a few bases in terms of genre. It's sort of a blessing and a curse... it's not pop, it's not rock, it's not emo, it's not post-rock... yet it's sort of all of those things as well. Whatever it is, it's definitely driven by the vocals and the lyrics. For the most part it's a deeply personal album; you don't have to do too much reading between the lines to know what most of it's about. And the vocals and arrangements and performances are all pretty emotionally drenched to reflect that. Maybe it's emo for your mid-twenties as opposed to your mid-teens.

CM: There is quite a diverse mix of sounds on the album, was this a conscious stylistic choice?

CB: I think the diversity of it is mostly down to how long it took to put together.  We were really struggling with working out what to do - at one point we changed our name, ditched everything we had up to then and just tried to be a heavy band. Fun as that was, it didn't really work for us so we started thinking a bit more seriously about what we could make together as an album. So the songs on 'More Stately...' range from piano and vocal things that I'd written about five years before we started recording, to songs written for the exact band line-up that were finished off all of a couple of weeks before we went into the studio. If anything, the resultant diversity had us in a bit of a panic for a while afterwards. I was convinced that it didn't actually work as an album, but once we'd got the songs into the right order it made a lot more sense. A lot of my favourite albums are actually a bit all over the place, but usually the lead vocal is what ties it all together. Look at Tom Waits or some of The Cure's albums - it's all about the distinctive voice drawing everything into a cohesive whole.

CM: Do you have a favourite track and can you tell us why?

CB: Oof. That's tough. I think probably the title track, to be honest. It was one of those that just sort of happened. It started off with me singing the main hook into my phone on the way to the cinema one night, and a few days later the song was finished without me really realizing I'd written it. I knew that I liked it, but it wasn't until everybody at Superball started singling it out that I gave it some real thought and realised it was probably the best thing I'd ever written. It's an absolute nightmare to sing though!

CM: The album was produced by Steve Durose of Oceansize, that must have been pretty amazing!

CB: Too right. I stalked Oceansize up and down the country as a teenager. A lot of my life is wrapped up in that band; it can all get a bit weepy if I really get going, to be honest. You just don't get bands like that every day, and I count myself as extremely fortunate just to have been around for the party, let alone to actually collaborate with one of them on something of my own.

It was humbling to have one of my heroes so dedicated to getting the absolute best out of us, because he had so much faith in the material. Even more recently, when we were finally getting the album mixed, he was pulling out all of these little details in our individual parts that he thought were special. Whenever I realise that it's actually one of the guys from hands down my favourite band saying all of this, I have to pinch myself a bit!

CM: Who else would you consider as your main influences?

CB: Most of them are pretty obvious really; Jeff Buckley, St Vincent, Mew, Son Lux, Local Natives, Roy Orbison, Edith Piaf, Scott Walker. There's a huge range of stuff that informs what we do as a band but fundamentally for me I love hearing great, emotional vocals. Nothing comes close.

CM: Can you talk us through your live set up as a band?

CB: Most of what we do is relatively straightforward, you know, four guys in a room. That's how most of the album was captured. But there are a few little tricks that we use to be able to get around some of the album's sounds. We've got a laptop hidden away that means I can do a little bit of looping of my vocals, like I do whenever I play solo shows as Charlie Barnes. It also means that Josh and I can trigger a few live samples so that we can achieve otherwise impossible things like having forty-odd layers of my voice going 'OOOOH!' in Dresden and Balloons. We could, of course, just stick absolutely everything on a backing track, but it wouldn't be quite the same as watching us tap a little pad on a keyboard and having something exciting happen.

CM: Where has been your favourite venue to perform so far?

CB: Our highlight so far was probably last year's ArcTanGent festival. We played two sets; one being our main set playing just material from 'More Stately Mansions', and the other being a (completely coincidental) headline slot on the smallest stage. For the latter, we did a bit of everything; I played a brand new one that isn't even on 'More Stately Mansions' out in the middle of the field just on my acoustic, we played some really old stuff using a bit of the looping technique, and then we finished off with a slightly different version of 'Ghosts' from the album. The guys who run ArcTanGent are just so clued up as to how to make a festival work in terms of both its line-up and its organisation. It's been a pleasure playing at their first couple of events, and I'm sure we'll cross paths again!

CB: We've got a handful of shows spread out over the next few months, including some amazing support slots with Black Peaks and Vennart. There are some more bits to be announced for the summer. We should be doing more of an extensive tour in September once the album's had a chance to do the rounds a bit. In amongst all of that we'll also be releasing our own signature coffee blend in collaboration with North Star Micro Roasters in Leeds, and we'll probably crack on with demoing the next album, given that it's all written and ready to go!

'More Stately Mansions' is released via Superball Music on 11th May 2015.