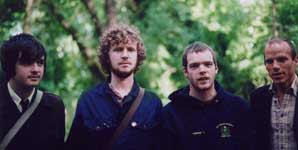 Eamon to concentrate on All Night Disco Partying

Brakes started life as Eamon Hamilton's (of British Sea Power fame and
quirkiness) outlet for his rustic brand of poetic, acoustic artistry. Now, as he lounges on a kitsch sofa in the cosy dressing room of Manchester's Academy 1, before the band's support slot for The Editors, he finds that his outfit has now crystallised into a trouper-group, as oppose to one of these style over substance super-groups. Comrades Alex and Tom White (Electric Soft Parade) and Marc Beatty (Tenderfoot) who have;

"Fleshed out the sound and done amazing things with it."

Success and recognition gained via the uber-rocking single 'All Night Disco Party' and the 16 tracks in 29 minutes debut album, 'Give Blood' that is a whirlwind of free spirited empirical rock with a Johnny Cash country nod and wink, has come along at no small cost;

"I have had to leave British Sea Power. Brakes were offered the Belle and Sebastian tour and this current one, as well as a tour of the USA, around the Austin area. I just couldn't dedicate the time to both groups anymore."

Eamon's demeanour is a relaxed one and it is evident that he is relishing the task of getting established all over again. Not to mention being a support band once more, something that seems to suit Brakes' sucker punch style;

"Yeah, I like winning an audience over who are there predominantly to watch someone else. It's like flirting with the Bank Manager's wife! We went down well with Belle and Sebastian's fans and with The Editor's lot so far. It's enjoyable."

This led me to wonder what sort of impression he wished to create with Brakes?

"Hhhmmmm, I'm not sure what impression we wish to create."

Ok, let's tilt it in another direction then, what are the aims and objectives of the collective?

"To take the songs I've written and play them as loudly as possible. We have all been mates for years and have a great deal of respect for each other, so we just wish to continue in the vein from which started."

This inevitably led to me get the amiable artist to divulge how they resolve creative differences? Given the fact that the band is comprised of highly creative musos with their own way of getting the job done;

"With fists mainly or whisky and beer is a good cure also."

It is clear that I am talking to someone with a poetic mind, so what forms the poetic base from which his song writing springs?

"I love Blake and Wordsworth, though I wouldn't perform poetry live. I don't like my speaking voice, I prefer my singing one."

In this digital and slightly lazy age, hype is all round us no matter where we look. I was interested to see if Eamon feels that we rely too much on tastemakers in both the USA and the UK?

"Tastemakers are like the man from Del Monte; they pick the bands and say yes. Everyone has freewill, it is just a shame that the tastemakers don't have better taste."

Eamon then scooted off to do a sound-check, as I took my place to watch I noticed that eight other people had gathered. This scene saw memories of my first British Sea Power gig flooding back into mind, whereby Eamon and his amigos still threw everything into it despite the modest gathering.

The sound-check itself is usually used by bands to perform a snippet of their songs and get the vibe right. However, with these guys when some of their songs are merely thirty seconds long, a mini-set ensued. Brakes are a sound engineer's dream, as their musical craft and professionalism means that their tango effect rock with a country blues spice is in great working order.

Eamon returned and was buzzing, enquiring "Is there a bowling Alley around here?" Oh yeah, is this a band secret?

"Yeah, it gets us in the mood; I usually get two strikes a game."

Although, he is clearly in love with his art form, would he change anything about the modern music industry if he had the opportunity?

"Erm, I dunno, I wish British promoters would treat you better. I mean, in Europe the treat you so well. They give bands a cooked meal at venues, but it's nothing like that here."

It was time to wrap up with an enquiry as to what gig Eamon last attended as a mere spectator and whether going to a gig is like doing homework? Does he compare notes on the band or artist's performance?

"No, I don't make any notes. I usually drink beer and just enjoy the experience. The last act I saw was Suburban Kids with Biblical Names. They are a Swedish folk/pop suburban act and were very good."

It did not seem long before the full band appeared before my eyes in a heaving Academy venue. The brazen sub one minute post rock whirlpool of 'Pick Up The Phone', had those gathered to see songs build like houses a little surprised at first, although they soon opened their minds to the crashing sounds.

The instrumental dexterity on show in marathon offering (well, for Brakes anyway) 'All Night Disco Party', sees the chugging baselines of Mark and the grinding guitars of Tom craft the perfect forum for the diminutive Michael Stipe figured Eamon, to gush out his gruff, cosmopolitan vocals. The four seconds beast of 'Comma, Comma, Comma Full Stop' signalled the end of a forceful and flying set, showing that the Brakes are well and truly off.