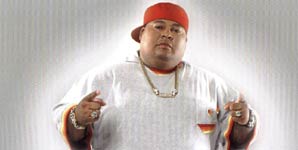 While Latin hip-hop and rap has been the causeway to a considerable flow of both industry and consumer dollars over the past five years, it's reggaeton that has provided a fresh face on the contemporary Latin music scene.

The relatively new sounds of reggaeton which blends Jamaican reggae and dancehall with Latin bomba and plena and the most recently adopted rap-style vocals. The latter is said to be a product of further influence bestowed by a good number of Puerto Rican artists.

One such innovator and now one of reggaeton's larger than life stars is Puerto Rico's Bimbo, an artist with a background and considerable amount of success in Latin hip-hop.
Bimbo recently took time from a hectic promo schedule to speak by phone to www.contactmusic.com

"It all started because people would see me on the street and say 'hey, we love what you do, but when are you going to make a reggaeton record? It happened so much that I finally decided to do it."
The internationally-recognized Bimbo recently took his efforts further creating quite a stir stateside via a series of well-planned promotional appearances in support of his first album in the Reggaeton arena, Bimbo Presenta: Reggaeton 100x35 (B&E Entertainment/Urban Box Office, 2005).
The single, "Fuleteame Mi Tanque" ("Fill Up My Gas Tank)", takes a witty stand against the skyrocketing price of gas, and with its more than obvious sexual overtones has been raising eyebrows as much as it's been filling dance floors and moving units since its release. With the controversial music video for the song making headlines across the nation, Bimbo was propelled into position to be included within the coveted pages of Rolling Stone magazine.
The December 15 issue of Rolling Stone's "The Hot List" which featured Beck at number 1 also featured Bimbo's video at number 5, calling the song a "great tune." The mention in such a high-profile and iconic magazine is prime evidence of the arrival of reggaeton and seemingly offers Bimbo as its proud ambassador.
For his part, Bimbo appeared at gas stations in New York, Miami, Los Angeles, Washington, D.C. and Dallas performing his music while his entourage of 'Freedom Girls' pumped gas to ecstatic motorists. Quite understandably, the campaign was a huge success.
While it may seem Bimbo simply capitalized on the country's current predicament, his motivation comes from his sincere desire to help others. He has strong sense and is proud of his Latino heritage and sees it as a major advantage especially considering the shift in the demographics in the United States.
"I think the time when we Latino's created our own divisions between ourselves: Puerto Riquenos over here, Mexicanos over there and son on to now where I think we all have realized, together we are a very powerful force and can really band together to make positive changes for everyone," said Bimbo.
With social, political, and music currents ever changing leaving most as mere observers rather than active participants, hard working, well-intentioned individuals are a welcomed commodity. Sporting much more than a thin-veil and packaged image, Bimbo offers good music, good times, and a good heart.
Look for Bimbo to be making his back to the U.S. for a full tour soon.