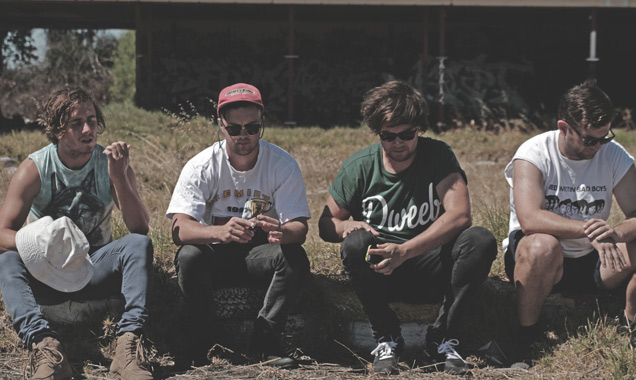 An Interview with Bad//Dreems at Live At Leeds 2015

The eyes of the world may be on the psychedelic output of Perth right now, but elsewhere in Australia, other towns are beginning to make too much noise to ignore. Adelaide four-piece Bad//Dreems take inspiration from a mind-boggling array of both vintage and emerging guitar bands and have gained a strong following since their 2013 EP 'Badlands'.

We caught up with Miles and Ben in a rainy, booze-soaked alley behind Nation of Shopkeepers ahead of their afternoon set to find out a bit more about their eagerly-anticipated debut, and whether they still enjoy a kick-around.

ContactMusic: Hi guys! How are you doing? Have you had a good day?
Ben Marwe [Vocals/guitar]: We've been in the car most of the day driving from Leicester and then we had to go get another hire car so the guys can go to France.

Miles Wilson [Drums]: Our bass player's dad lives there so we're just gonna go and see him for two days. We got a really cute hotel that's like a windmill: nice, old stone with a bar.

CM: We heard you guys met at football. Do you still play, or do you focus more on music nowadays?
BM: We met Alex - our guitarist, who's actually not here and we have a touring guitarist because Alex is actually a doctor and he couldn't get the time off work - we met him at our football club but we had already known each other for a while.

MW: We all went to the same high school in different years and we all played for the football club at different stages in different teams. We knew each other prior to this, but that's when we decided to play some stuff together.

BM: None of us play anymore. I had a knee reconstruction two years ago so I can't play. I had a trial game a few weeks ago and my knee was fine but I was very unfit.

CM: The focus is on Perth for music in Australia at the moment, but how is it in Adelaide?
MW: It's on the up. it's on a steep incline. It was not very good for a long time!

BM: Ali, our touring guitarist, records music at home from his recording studio. He works with bands like West Thebarton Brothel Party, who are f**king awesome.

MW: Best name and best band - so it's two-for-one!

BM: It's not as healthy as the scene is in Perth. We actually know a few of those bands and they're just so tight with their friendships, but it's not really like that in Adelaide.

MW: We - and without sounding like a d**k - do our own thing because, I dunno, no-one really likes us! It's no different to England in that the smaller towns, like Hull, just don't really have the live venues or population to sustain a scene at that level.

BM: Because Perth has geographical separation from the rest of Australia they have to build their own scene and industry. They've done really well.

MW: Melbourne obviously has acts like Courtney Barnett getting exposure on global stages like Tame Impala and Pond and all those other bands from Perth.

CM: What was the story with your signing to Ivy League Records?
BM: We're both footie lovers so that worked in our favour!

MW: The A&R guy there is a massive football fan, but also there was a girl that worked there who does PR and plays in a really good band called Bloods from Sydney. We played shows with them when they came to Adelaide. She put us on to the head of A&R and he came and watched us a bunch of times. He was really lovely and we hit it off.

BM: Yeah, they've got some other bands like The Rubens and Cloud Control.

MW: Ivy League were responsible for Jet and The Vines, so they've got a pretty good reputation. Given their resumé, we were pretty keen to jump on board. We've got a really good relationship with them.

CM: Can you tell us anything about your debut album?
MW: We can tell you a bit: it'll probably come out in early August with probably 12 tracks on it. How does it differ from our other stuff?

BM: The real, straight-up Australian rock sound from our previous singles isn't present through the whole album, but there are tinges of it. We've got some slower songs.

MW: Kind of eighties Australian rock like The Church. I don't know if it was intentional but the album has a real eighties feel.

BM: Well, it was our intention to get that big eighties sound that's not there anymore.

MW: Stadium drums, shotgun snares, jangly guitar. The style of writing was, I guess, harkening to that. The producer Mark Opitz has done AC/DC, The Angels, Divinyls and that sort of thing. I guess we picked him thinking that was the sound we wanted to achieve.

CM: What's the most unusual comparison you've had so far as a band?
BM: Oh f**k there's been a lot! Sometimes it's just not even close.

BM: Some guy told me we sound like a mix between Stereophonics and Foo Fighters! I just didn't understand. On the other hand, we get people saying "I hear a bit of Cosmic Psychos in there, I hear a bit of Wipers, I hear a bit of the very underground Australian band called GOD," which is quite humbling.

MW: I always think it's funny that people have to liken a band to another band, but I do it as well! Last night I watched Eagulls and I was like "sounds like Echo & the Bunnymen". They sound like all our favourite UK bands.

CM: Is there one particular act that inspires the band?
MW: A very good question. It would be different for each member of the band.

BM: It would probably be different depending on the song. Probably Eddy Current Suppression Ring would be a big influence.

BM: We were listening to them in the van on the way here to get in the mood. They just make exciting music. I was reading about how they started, with impromptu house parties with 500 people where they'd play in the kitchen and be spilling out on to the road. That would have been such a good thing to be part of.

MW: They were probably the first good band - you know you listen to s**t music until you're like, 10? - I was 13 when I heard The Libertines and that's when I started to listen to good music.

CM: What's your pre-gig preparation?
BM: We kiss each other.

MW: I used to like to get really p**sed but then one time I played not p**sed and it was really good. I play better sober.