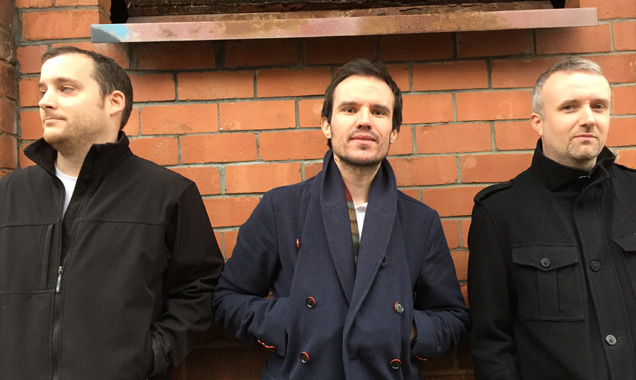 An Interview with Alphas

Alphas are back on the music scene with their second single 'Waves' out on July 6th 2015 via AlphaBravoCharlie Records. The trio create a punch indie-pop sound that will get your toes tapping and your heads bobbing to their guitar-jangling beat. Not only sharing influences of the likes of Blur and Doves, the lads also share first names! Introducing - Andrew Burden, Andy Kite, Andy Clarke aka Alphas.

Who are you and where are you from?
Alphas are Andrew Burden (guitar and vocals), Andy Kite (bass) and Andy Clarke (drums). We've all found our way from various points in Scotland to set up camp in Aberdeen in the North East of Scotland.

Your single 'Waves' is about people and their changing ideas and dreams - is there a particular person or situation that inspired this theme?
It's really around your typical 30-something who has long held dreams but has become so locked into modern life that they've become virtually abandoned in favour of going to B&Q on a Saturday afternoon to buy tester pots of paint for the spare bedroom. It's about ripping that up, deciding that you used to aspire to achieving something that you actually cared about and that you should get back after it - the spare bedroom can wait!

What makes Alphas different from the other bands on the indie scene at the moment?
None of us have beards! We like to think we're confident enough to be beyond the general b****cks that seems to follow the indie scene and just let the tunes speak for us. We're just three guys getting up on stage playing some proper melody driven indie-pop numbers. And we're generally not fussed to make sure that our quiffs and leather jackets are looking top notch.

What can fans expect from Alphas live?
Loud, fast and frenetic. We try to take the recordings up a notch when playing live. Hopefully successfully!

What is the scene like up in Aberdeen?
A lot of metal. But really an interesting mix of music and venues to play. It's never going to be like Glasgow or Edinburgh but I think for the size of the city that it does pretty well. It's good for a new band starting out particularly as you find that getting a gig isn't completely driven by the amount of friends you can bring along. Which isn't the same experience we've had in other cities.

Has the changing Scottish political landscape influenced your songwriting in any way?
Not really - songwriting inspiration is much closer to home for me to be too influenced by outside situations like that.

Of course, had the independence vote been successful, I may have been inspired to write a Proclaimers-esque ode to Scotland, but the world has been spared that for the time being.

When is your debut album out, what will it be called and are there any themes we can expect?
The debut album will be out in September 2015, titled 'New Fire' after one of the songs on the album. You can expect lots of guitars, bass and hi-hats, catchy melodies throughout and what we hope is an album that people will want to listen to in the car and put on at a party.

What's the hardest thing about being in an independent band in 2015?
Fully understanding the music "biz" and what's required, in addition to making great tunes, in order to progress in the business. The idealistic idea of sending a CD to a label or radio station and them listening to it or giving it a spin on air is quite detached from how the business actually works. You really need to get adept with the plugging and PR aspects to really start to make things happen. Fingers crossed we're starting to get cleverer from that perspective.

What are your musical influences and why?
Influence wise, musically I was very much a 90s kid so Blur and some others from the Britpop era no doubt lurk somewhere deep in the sound. Also can't help but fall in love with good indie tunes that pull you in with a great beat and guitar led melodies.

One of the iTunes reviews of our first single put it quite nicely, 'If The Killers and Franz Ferdinand had babies they would sound close to this. Add some Talking Heads and boom! You've got Alphas'.

Where can we listen to more Alphas online and which song do you recommend we start with?
We've got some tracks on our Soundcloud page. After listening to the latest single 'Waves', give 'Here Comes the Burn' a listen, we're very proud of it. Actually, just listen to everything that's on there!