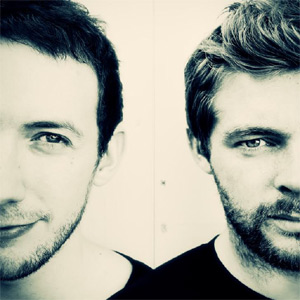 A band only started in 2012 by two friends from University, Martin Roberts and Lee Tyler have created a promising stir in the London area. A blend of Indie-dance, post rock and piercing electronic beats have been given a big thumbs up by the fans. Their sound has been compared to Friendly Fires and the Pet Shop Boys; however they are just making what they enjoy.

Their four-track EP is soon to be released, as well as their debut album which will follow later this year. With tracks like 'Echoes' and 'Walls' bringing an intense dance- post rock feel, and 'Disappear With The Night' showing their electronic roots; Aelius are set to leave their mark in 2014.

Contactmusic: How are you?
Martin Roberts: Yeah, I'm very well thank you.

CM: Tell us how Aelius came about?
Martin: It was about a year and a half ago. Me and Lee are old friends from University, we just got together one day and started making some music, and we just kind of wanted to make music for ourselves if that makes sense, so not to really please anyone else, and then it just went from there. We got our drummer and guitarist in board, and it just transpired from there.

CM: Have Aelius got a new EP coming out?
Martin: Yes we do, it is coming out on the 17th March 2014 and that's our debut EP which has taken a one and a half years to make, just due to how pedantic we are about how things sound. It's a four-track EP and 'Echoes' is the lead single which we have just shot the video for.

CM: Wow, 2014 is going to be a busy year then.
Martin: It already has been, it's been mad and we're not even through the first month.

CM: Do you and Lee both sit down together and write material or do you do things individually?
Martin: Yeah, how it usually works is Lee and I go to the studio and get some bare bones to a track. We play some very basic drum beats and put some bass over it and then do some vocals. Then we get Hugo (The Drummer) to come in and do his thing, and then we'll get Ian in who's the guitarist and he will just make it what it is. It's quite funny because when we first started, it really was just me and Lee and it was really was very electronic, and you can really hear that on 'No Way Out' which is one of the tracks on the EP. It was the first track we wrote as Aelius and is purely electronic. Then we got Hugo and Lanc on board, sorry Ian and then it became more of what it is now. 'Echoes' is totally different to 'No Way Out', and with our EP we wanted to give a small snippet of what we go for, as you have 'Echoes' which is on the post-rock sort of feel, and 'No Way Out' which is totally electronic. Then you have 'Walls' which is completely different to the two. 'Disappear With The Night' is a little bit more soundscape and is almost a cinematic type of thing. All is done from in house, so it starts with me and Lee and then we go from there.

CM: So the band has full control over the production and the sound you want?
Martin: Yes indeed, it's completely us from mixing to recording vocals and instruments and then mastering the sound; it's us who control that aspect. I think it would be really weird for us if we didn't have control. I think if you come from a band-background, and you are all writing it can be kind of easy to get someone else to mix the songs. But with us and our background of producing and writing, it kind of makes you a little protective over everything; and of course nothing is ever finished and mixing takes forever.

CM: Having done it all yourselves, how was the production process on the EP?

Martin: The process has been a mixture of everything, it has been difficult, annoying and frustrating at times, but of course it has also been enjoyable as we would not have been doing it if wasn't. It's been a complete mixture of emotions, and that's what makes it so great. We just want to have fun, and we hope that it shows in the music, and really that's what music is all about because music is one of my biggest passions and it can take you on so many journeys, and that is exactly what our album is going to be. It's not twelve individual tracks, it is an emotional journey from start to finish. One minute you can be dancing to 'Walls' and then you are down and you have this soundscapie thing. One track nicely flowed into another. Whenever I listen to that feature on an album, it makes me appreciate it even more; the new Daft Punk album is a perfect example of that, the transitions are great. I believe this is really missed these days, back in the day it was all about making an album that flowed, Pink Floyd's 'Dark Side of the Moon'. well that speaks for itself, it's a perfect flow and yet is an album of perfect individual songs.

CM: Which albums were you listening to whilst writing the EP or albums?

Martin: 'Hurry Up We're Dreaming' by M83 was a big influence as well as their back catalogue, and it even inspired us to do Aelius. We were both listening to dance albums, and then we came across this together, and kind of opened our eyes to what we could do. The Foals track 'Spanish Sahara' is one of my favourite tracks, and that can be seen in 'Echoes'. Pink Floyd and Jeff Wayne's War of the Worlds is where we take a lot of our sound sources. We kind of see Aelius as an amalgamation of what we listen to in our private time.

CM: Right now, which Aelius track is your personal favourite?

Martin: It's probably one of the ones from our album called 'Young Hearts, Fragile Minds'. It's probably going to be our album opener; it's a favourite and that's and that's really down to how the track came about. We were doing a session with Ian, we were recording guitars for 'Echoes', and we left the tape rolling, and he played this little riff. The song was written in four hours. Again it's really soundscapie, and then it just hits you. It just shows everything that we are as a band; it's strong and showcases us. Aside from that 'Echoes' is one of our strongest, but at the time of writing it we just thought it was an album filler. Then it got played on Eddy Temple-Morris' XFM show last year and it just escalated; and now we are here and it's really weird.

CM: You mentioned shooting your first video, how was that?
Martin: Yeah that's just happened three days ago actually, the experience was really cool.It was absolutely freezing. We hired out this venue in Brockley which is an old ball-room that many big bands have played. I think Kings of Leon played there and it was a really cool place. It's got the big chandelier and cliché things. We walked in and saw the owner, he said he had just put the heating on so should warm up.but it didn't. Yeah, totally freezing and yet fantastic working with  the guys who are as passionate as we are to do what we do, and that really helps to work with people who love to do what they are doing. I think a lot of times in life, people don't always do what they want to do and this was refreshing.

CM: What was your favourite album when you were growing up?
Martin: Ahh, that's a really good question. When I was growing up, I was always listening to Michael Jackson's 'Bad', that was my favourite album then and now; it's timeless. When we were both growing up, we were heavily into the Garage scene, but 'Bad' is still there.

CM: Is Aelius planning a tour in the future?
Martin: We have some ideas, but nothing set in stone just yet. We are planning an EP launch party and maybe a little tour around that but nothing has been confirmed yet so watch this space I guess.

CM: Other than your EP and album coming out this year, what else can we expect to see this year?
Martin: I think for us it's about getting out and playing live more, as our sets are quite complex and we've had to pick and choose the venues. It's not the kind of set where you can go to your local pub. So last year we played Bar Fly and the Garage in November; but for now it's about getting out there and showing people what we can do. Hopefully you will see a lot more of us.Hopefully. I've been into theatrics from an early age, and have just got back from touring with a German band called 'Schiller' for two months playing keys for them. So I'm kind of used to performance, I think Lee is the same and he's enjoying singing live in front of people same as Hugo and Ian. As with playing live you get all the nerves, that when you step on stage turn to adrenaline and that just fuels our shows. I think the day I don't get nervous is the day I should stop. Playing live is so important because it bonds us together, as we may not have met otherwise.

CM: Thank you for taking the time to talk to us today Martin