Former Interpol Musician Carlos Dengler Has Retrained As An Actor Following His Departure From The Group In 2010. 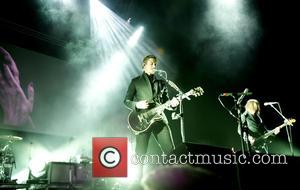 Picture: Paul Banks and Interpol - Shots of the American rockers Interpol as they performed live at the Heineken Music Hall in Amsterdam, Netherlands - Friday...

The guitarist quit the band after they finished their self-titled fourth album, and has kept a low profile while taking a three-year acting course at New York University (NYU).

After finishing his training this spring (15), Dengler acted in a theatre production of Sherlock Holmes and the Case of the Jersey Lily in Vermont, and he is now hunting for representation.

He tells Bedfordandbowery.com, "I'm auditioning and looking for an agent. Really, I just graduated. Also, it's not fair for me to even say, 'This is what I'm doing.' I spent three years in acting boot camp and I'm a 41-year-old man. I'm no spring chicken. So I'm looking at some of my younger classmates and how they're coming out of the gate with fire under their a**es and they're doing a lot of stuff. I'm like, 'Wow, that's pretty f**king impressive.' I just don't have that ability right now. I'm still putting all of the pieces together."