Nottingham supergroup-of-sorts Injured Birds may be the next discovery off the city's seemingly vibrant production line of talent to follow the likes of Jake Bugg and Dog Is Dead onto national daytime radio playlists and hopefully, beyond. Although still only two years old, the four-piece - centred on the vocal musings and complex yet simply orchestrated arrangements of Samuel Kirk - have already established themselves on the live circuit in and around their native city. With each member of the band dividing their time between Injured Birds and various other musical projects, there's a healthy degree of variation and diversity within Injured Birds eclectic make-up. 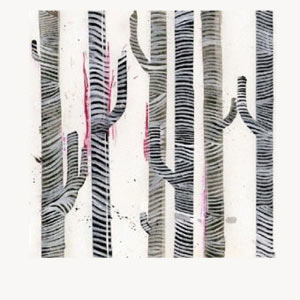 It's perhaps no surprise then that their long-awaited debut 'Silver Birches', a record that's taken almost the duration of the band's existence to develop, record and release, veers between the new wave of folk made popular by the likes of Mumford & Sons and cinematic elegance associated with the likes of Shane Meadows associates Sunhouse and Clayhill. Indeed, when Injured Birds choose to proffer the latter, their sound conjures up idiosyncratic images of a cold winter's walk through a frost-glistened meadow (not NG2, in case those of an East Midlands persuasion were wondering). Take album standouts 'The Forest' and 'Seaside Towns' for example. The former's affluent melody and descriptive prose acts as an opulent reminder of the underrated Lowgold, while the latter could be the Manic Street Preachers 'Indian Summer' albeit stripped down and given a banjo and ukulele makeover. Closing epic 'This Won't Last' also gives the likes of Guy Garvey and Elbow a run for their money, Kirk's despairing lament tugging at the heartstrings with every passing couplet ("When you take my mind you don't want my body too").

Sure, at times they do stray into predictable territories occupied by the much-lambasted Mumfords and Dry The River; 'How You Were Beautiful' and 'In The Doldrums' seemingly come with London's poshest country boys seal of approval; but forget the seemingly never ending saturation of that band and judge Injured Birds on their own merits instead. Opener 'K' offers winsome words over organic instrumentation in a way one would imagine Fairport Convention used to construct their own timeless pieces four decades ago. Former single 'Happy As Clams' also makes a claim for most introspective debut 45 of the year, Kirk's solitary wish "If we could be we'd be happy as clams" about as close to an adult nursery rhyme as it gets.

Add the salient acoustics of 'Wood Is Dead' ("Why are you so hard on me when I'm trying to be kind?"), happy-go-lucky cheeriness brimming through 'Hey Now Hey Now' and folk-driven sea shanty 'Song For Bailey' covering all bases and its clear to see why Injured Birds are a difficult conundrum when it comes to pigeonholing their sound.

But then why have it any other way? A promising debut all told that hints at a whole lot more in the future.