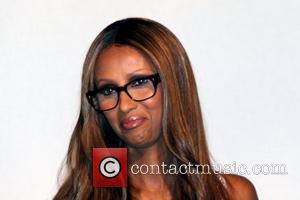 The daughter of supermodel Iman has opened up about her life-long battle with her weight - revealing she underwent drastic surgery in a bid to slim down.
Zulekha Haywood, Iman's daughter with her first husband, former basketball player Spencer Haywood, admits she has always been conscious of her size after growing up with her super-slim mum.
But the 31 year old struggled to control her diet and tipped the scales at 330 pounds (150 kilograms) by the age of 26.
Haywood reveals she tried a string of diet programs, but eventually resorted to dangerous gastric band surgery three years ago, which finally helped her shed the pounds.
She tells America's Glamour magazine, "Imagine you are the daughter of a supermodel. Now imagine you weigh 330 pounds. I have more or less been on a diet since I was eight years old. None of them worked."
Haywood adds in an an interview with America's Today show, "I was always happy. At 330 pounds, at 320, at whatever weight I was at, I was always happy. But what happened was at age 26, I was having an increasingly hard time getting out of bed. I had started to develop osteoarthritis. That leads to heel spurs, deterioration of the bones, and I just wasn’t feeling vital anymore. If this is at 26, then what’s going to happen down the line? I tried everything, and gastric bypass was the last resort.”
And Haywood explains she's grateful for the surgery, because she's finally happy with her looks.
She adds, "The weight is gone and it’s no longer an issue for me. Now I’m so much happier - not because I lost the weight, but because I feel such a sense of contentment with myself."

Iman Is Committed To Glamour

Iman: 'I Won't Be Rushing Bowie Back To Work'