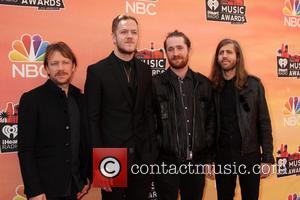 Hometown favourites Imagine Dragons have become the first winners of the night (18May14) after winning the Top Rock Album at the 2014 Billboard Music Awards in Las Vegas.

The group, which formed in Sin City, beat the likes of Lana Del Rey's Born to Die, Mumford & Sons' Babel and Lorde's Pure Heroine to claim the honour for its debut release Night Visions.

As the stars accepted the prize, frontman Dan Reynolds made sure to thank the fans who had supported them "here in Las Vegas from the very beginning".

The early win is a good start for Imagine Dragons - they are tied with Lorde for the most nominations with 12 a piece, while they will also be hitting the stage at the MGM Grand Garden Arena to perform later on Sunday.

The awards show, hosted by rapper Ludacris, was kicked off by Pitbull, who got the crowd dancing with his new track, the official 2014 FIFA World Cup soccer anthem We Are One (Ole Ola) with Jennifer Lopez and Claudia Leitte.

OneRepublic also performed their hit Counting Stars and Iggy Azalea and Ariana Grande teamed up for a sexy rendition of their respective hits Fancy and Problem.