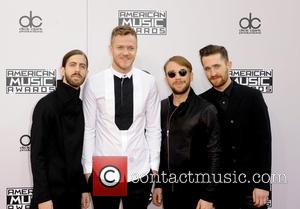 Picture: Imagine Dragons - Photographs of a wide variety of stars from the music industry as they attended the American Music Awards 2014 in which were...

Imagine Dragons have landed their first U.K. number one with their sophomore album Smoke + Mirrors.

The rockers, whose debut Night Visions peaked at two in 2013, dethrone Sam Smith's In The Lonely Hour, which enjoyed renewed success following his multiple wins at the Grammy Awards earlier this month (Feb15), forcing the Brit to settle for second place.

Ed Sheeran's X slips from two to three and rapper Drake's surprise release, If You're Reading This It's Too Late, is a new entry at four, ahead of Scottish band Texas, which rounds out the top five at five with Texas 25.

Meanwhile, singer Ellie Goulding racks up her third week at number one in the U.K. singles countdown with Love Me Like You Do, which has also become the most-streamed song in chart history with 2.6 million hits in the last week, replacing previous record holder Uptown Funk, by Mark Ronson and Bruno Mars.

The rest of the top three remains unchanged too - Ronson and Mars hold stead at three, just behind Hozier's Take Me To Church at two.