Imagine Dragons caught the attention of Interscope Records in November 2011 after releasing a series of EPs. Since then, the rock band have worked with music producers Alex Da Kid and Brandon Darner (The Envy Corps) for the release of 'Night Visions' (Deluxe Edition) mastered by Grammy nominated Joe LaPorta. 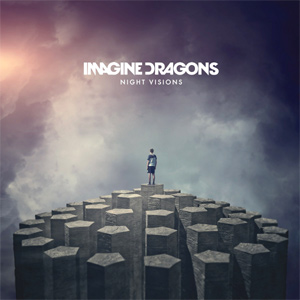 'Night Visions' opens with 'Radioactive', an appropriate name for a song that has received such active airplay and contains such explosive dubstep beats. The subdued acoustic guitar and choir-style vocals contrast the volatile bass line and indie rock vocals of Dan Reynolds who utilises lyrical imagery to create scenes of desolation and wasteland: 'I'm waking up to ash and dust/

I wipe my brow and I sweat my rust/ This is it, the apocalypse'.  The work of hip hop producer Alex Da Kid enhances the track, immersing the listener in the revolutionary themes and large beats that give the Dragons the wings they need to reach greater heights. The producer's work is continually distinguishable throughout the album, particularly on tracks such as 'Bleeding Out', 'My Fault' and 'Round and Round'.

On each track, the band change their style using varied instrumentation to create the desired effect. 'It's Time' opens with a hand-clapping style similar to the drum beat of Green Day's 'Wake Me up When September Ends' and applies the folk sound of a mandolin which lingers over Dan's softened, emotive vocals. Here, the band are comparable to chart topping artists One Republic.

The album's fourth single 'On Top of the World' celebrates the band's success since forming in 2008. The song features inspiring vocals and stadium style chants, which create a sense of uplifting unity between the band and the listener. The video received over 835,000 views during its first week of release, proving the band's dominant status in the music industry as they continue to grow in stature and popularity.

Unfortunately, as the extended album progresses, there are times where the constant mid tempo tracks become mundane and boring. The repetition becomes easily apparent and the genre conventions make the album too predictable, but then there's tracks like 'Working Man' which enlightens the album with a positive pop chorus bearing resemblance to The Killers.

Imagine Dragons have soared through the music industry with their debut album, obtaining Platinum certification in the United States, plus plenty more commercial attention across the pond in Europe. Their genre collaborations give them a unique twist, blending dubstep, indie and pop music to create orchestral anthems which feel appropriate for stadium size venues. However, the conventions can become overly defined and it becomes difficult to distinguish where Imagine Dragons have added their own interpretations and style. Despite their occasionally formulaic approach, 'Night Visions' is still a diverse and enjoyable album that is sure to keep the Dragons flying high.