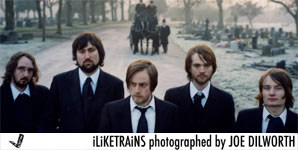 iLiKETRAiNS have self-produced a wonderful debut album, 'Elegies to Lessons Learnt', due for October 1st release.
Recorded in an old chapel in Leeds the album was mixed with the aid of Ken Thomas (Sigur Ros, Hope of the States). It continues their inimitable obsession with past character and events, tying together their morose message of doomed inevitability.

First single, 'The Deception' released 10th September 2007, tells how proud determination and courageous spirit can fog the natural instinct of survival, with disastrous consequences. The tale is told through the eyes of an ill-fated round the world yachtsman. It is accompanied by a self-directed video featuring a voiceover from '60s radio presenter and shipping forecaster Peter Jefferson.