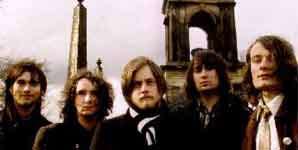 With so many different venues and club nights springing up in Nottingham, one can get spoilt for choice way too easily.

The Drowned In Sound night has only been going for three months before tonight but already the calibre of artists has created a buzz around the city that has seen the night sell-out well before the headline act has appeared on stage.

Tonight was no exception, which meant the task for recently formed Leeds band Polar would be immense. Playing only their 2nd ever gig, despite a few nervous silences in-between songs, the sheer magnitude of their sound had to be seen (and heard) to be believed. Front man Lyall Stephens is an all singing, guitar playing, ivory tinkling master of all trades whose energy seems to ignite the rest of the band into action. 'Hans Blix' sounds like Interpol being given a Chinese massage by Muse while the rest of their set veers between Sigur Ros style inner torment and (dare I say it) Coldplay-esque balladry. But without the schmaltz. Ones to watch out for, you can bet your bottom dollar on that.

In contrast to the openers, Nottingham four piece The Kull have been around in various guises for a few years now, and while they have often found themselves knocking on the door to success, their current brand of LOUD, abrasive, guttersnipe rock (think Six. By Seven in bed with Black Sabbath) may just be the formula they've been looking for. 'Miss World' and 'Moneysuckle' both bludgeon and bewilder in equal amounts, while recent single 'Tic Tac Toe' is an inspiring slab of art-rock with the amps turned up rather than decorated in flowers and abstract paintings.

Next up was an acoustic set from local singer/songwriter Kevin Richards. His set seemed to beset by endless problems with his microphone and after several bouts of re-tuning his guitar, finally got some kind of semblance.

Which is something that You Judas found hard to grasp. Now, eclecticism is the fruit of all good and evil, and the organisers should be applauded for giving their audience more than just the average indie palaver, but You Judas and their monotone sludge feast really did go down like a pork themed buffet at a Bar Mitzvah. Not for me lads, sorry.

Fortunately, iLiKETRAiNS were around to restore all parity, and they did just that with some aplomb. Dressed in their now familiar British Rail through the ages jackets, their set crossed so many boundaries even Brian Lara would write books about it. The most striking aspect of their set though is the sheer precision with which they play not only as a band, but utilise the visuals to such split-second accuracy.

'A Rook House For Bobby' and forthcoming single 'Terra Nova' didn't just sound immense, they almost took the roof off of the venue while the closing murder-he-wrote epic 'Stainless Steel' simply brought the curtain down on an intensely dramatic performance that was well worth the admission fee alone.

Another eventful, and most importantly, successful night then for the Drowned in Sound team, and if they can keep bringing quality acts like iLiKETRAiNS to Nottingham then I predict they'll be around for a while yet.