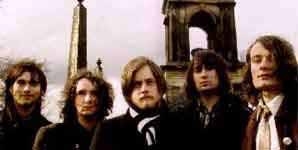 Talk about working the graveyard shift! When local experimentalists The Exploits Of Elaine take to the stage, most of Nottingham probably isn't even aware that the doors are open, and they end up playing a good three quarters of their set to an empty, vacuous space. Thankfully, yours truly walks in with three songs to go and witnesses something frankly astounding and sonically reverent in many ways. Whilst it would be easy (and downright lazy) to label The Exploits Of Elaine as mere post-rock apologists, their incendiary racket consists of mood-symphonies in the key of noise, and by the time they get to the epic finale, the other half of the city has finally woken up to rejoice at their feet. Blissful.

Next up is Micah Blue Smaldone, one time punk rock enthusiast but now one-man troubadour of the American underground anti-folk scene. With a new album ('Hither And Thither') currently in the racks and a bunch of tales to tell, his is the perfect sandwich filling in between The Exploits Of Elaine and iLiKETRAiNS' bigger-than-a-constellation soundscapes, and he goes down with some aplomb before being mobbed on his way back to the single occupancy of the t-shirt booth by all and sundry, not least by members of the other two bands. How's that for gratitude, eh?

Finally iLiKETRAiNS emerge like a bolt from the blue, all emblazoned in their British Rail uniforms like the national executive committee of ASLEF about to commence this year's AGM. But don't for one minute think that there is anything gimmicky or quirkily kitsch about iLT. In fact, nothing could be further from the truth as from the moment they strap on their instruments and launch into the opening bars of 'William's Last Breath', there's neither a blink, bum note or comedy dance routine in sight. Instead the intensity â from vocalist David Martin's almost-spoken word monologues to the ferocious musical accompaniment taking place behind him â is almost beguiling in its stone-faced incredulity. Quite frankly, the combination of disturbingly provocative lyrics ("and if they find me, let them indite meâ¦") coupled with riffs amassed from the style tutelage of the likes of G!YBE and Sigur Ros makes for an engaging listen, not to mention the accompanying slideshow, which cornet player Ashley Dean switches in between with the greatest of ease during each song.

Two of the bands newer songs, 'Fram' and 'The Accident' are given an airing this evening, and both fit into the band's repertoire like well-manicured hands into the finest leather enclaved gloves. The biggest cheer of the evening though is reserved for set closer 'Stainless Steel', which gives a new meaning to the epitome of the genre "murder ballads", and ultimately reduces the forgotten Bad Seeds to a state of redundancy so far as the year 2006 is concerned. As always, the finale consists of an all-out deluge of noise and distortion, with uniformed arms-a-flailing in competition with follicles of hair and sweat, thereby removing any doubters fearing these trains were running to a standstill.

At this moment in time, iLiKETRAiNS are quite simply among the most innovative and intense bands on these fair shores. Ignore them at your peril.