Review of We Go Hunting Single by iLiKETRAiNS 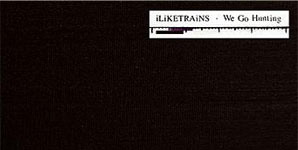 Anybody fancy an up-tempo number (relatively speaking) about the Salem Witch Trials? Just the thing for a balmy summer evening, surely? Oh, go on. Here's an opening line to tempt you in: "I curse the day I ever set foot in this God-forsaken town". If I tell you it develops into an internal dialogue about hunting "my own flesh and blood", would that convince you? I mean, you have to go along with it, because "if the demons divide, then the demons will conquer". Pretty bleak stuff from iLiKETRAiNS, but entirely in keeping with their chosen m'tier, which is expanded here to truly Gothic dimensions. The chords threaten at one point to break apart and unleash the very bowels of Hell: they turn against the melody in the manner of a man taking a knife to his mother. Perfect for a flickering, candle-lit Hallowe'en, but I'm not convinced it's entirely the right thing to be listening to on a July day that threatens to turn thundery later.

"More Weight" is far more suited to the occasion - musically at least. It tells the tale of one Giles Corey, a farmer in colonial America crushed to death by stone weights. Why? In an attempt to force him to confess to a charge of witchcraft. The heavily delayed guitars shimmer quite beautifully and the scant percussion twitches like dancing midges. It manages to be both epic and brief. Some feat, that.
Anybody expecting iLiKETRAiNS to make radical departures (do you see?) from their template will be disappointed, but these are two very decent songs, offering two more little snapshots of the singular world-view that iLIKETRAiNS are building.