Review of Sea Of Regrets Single by iLiKETRAiNS 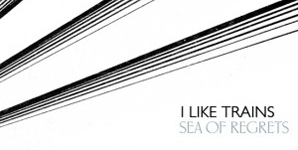 For most groups, a parting of ways with their record label can often mean the end of the line, particularly if one of the reasons for such a split was due to a lack of commercial success. Throw in the departure of a long-serving band member as well, and you'd probably find the rest of the band scouring the situations vacant column of their local newspaper as we speak.

Leeds four-piece ILiKETRAiNS aren't like any other band though. Having created a niche all of their own, both musically and lyrically thanks to their historical referencing and sweepingly audacious take on the post-rock genre, they've taken advantage of their time in limbo, returning to the drawing board to map out the next chapter with outstanding results if 'Sea Of Regrets' is anything to go by.

Initially aired at this summer's festivals, 'Sea Of Regrets' quickly managed to usurp most of their previous output, its epic grace and defiant salute of "I will leave this world in pieces" becoming a focal point of their live set. As their first fully self-produced and self-released offering, this six-minutes long opus loses none of its impact, slowly building in the tradition of ILiKETRAiNS best regarded previous works before exploding in a climactic finale of keyboards, distortion, and Dave Martin's unmistakeable vocal.

A welcome return then, and one that beggars the question why on earth are this lot unsigned?