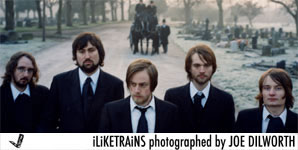 Undoubtedly one of the most original ensembles of the current decade, Leeds quartet iLiKETRAiNS have established themselves as one of the UK's quirkiest, yet unknowingly influential bands via a clutch of exceptional records and exhilarating live shows. Surprisingly at this moment in time, they also find themselves without a record label, their contract with previous suitors Beggars Banquet expiring shortly after the release of 2007's 'Elegies To Lessons Learnt'.

Since then, cornet player and visual artist Ashley Dean left the band resulting in the now four-piece version of iLiKETRAiNS to head back to the drawing board, re-emerging earlier this year with arguably their strongest, and most accessible collection of songs to date if their performances at this year's Great Escape and Latitude festivals are anything to go by.

It was at the latter, just after their storming show in the Uncut Arena that Contact spoke to vocalist, guitar player and main lyricist David Martin and fellow guitarist Guy Bannister.

How did it feel going onstage pretty much straight after Thom Yorke had finished his slot?
Guy: Strange in some ways. It's a shame actually as we didn't get a chance to watch him as we had to get ready ourselves.
David: It also meant we had to cut our set shorter than we'd planned it to be as Thom played a longer set than expected.not that we're complaining, we're massive fans of Thom Yorke and Radiohead.
Guy: What was the song that he ended his set with? It's the one that's on the Radiohead live album but hasn't been officially released.'True Love Waits' I think it is.

You played the Dour Festival in Belgium last night. What kind of reception did you get there?
David: Belgium has always been really good to us. We always end up in Belgium playing new songs for the first time so they get to hear them before anyone else does! That's never been part of the great scheme of things; it's just the way things seem to happen.
Guy: The audiences over there are always receptive to new things, possibly more so than back home to be honest.

Your set consisted almost entirely of new material today. The one which stood out for me though was 'Sea Of Regrets'. What can you tell me about that song?
David: It's the logical next step for us really. We've been looking backwards at history for so long that we've now started to look forwards. I think 'Sea Of Regrets' is the centrepiece of what we'd like people to see as our "future" album. That doesn't mean we're about to embrace tin foil and space suits though - it's still a kind of bleak worldview of things.
Guy: We just don't want to be typecast as this band that only write about characters or events from the past.

Are there plans to release it as a single?
David: Well, that's our intention but how or who we're going to be putting it out with is anyone's guess at this stage.
Guy: We've not been assigned to a label since Beggars effectively ceased to exist in their own right.
David: We're currently unsigned. That's why its taken us so long to record the songs that we hope will make up the new album. It's quite bizarre really. We're an unsigned band yet we're travelling around on this huuuuge tour bus!

Is there a working title for the proposed new album?
David: I don't really want to divulge too much about that just yet. I think we're fairly certain of what the record is going to be called.
Guy: .everything is in place but we're just going to hold back a little bit.

Why is that?
David: I guess the main reason is that I don't want to seem over-confident for starters until we know for sure how and when the record is coming out. Once we've got everything else finalised then there'll be an announcement.
Guy: I think it's important that everything else comes together before we start predicting when new records will be released.

OK, well is there a target date or timeline when you'd like to see the record released by?
David: Hmmm..a few months ago!
Guy: As soon as possible really but realistically I don't think it will come out before the start of next year now.
David: Yeah, I'm really gutted about it to be honest.
Guy: We're so ready. All the songs are pretty much finished, and we've had great feedback from people like you who've seen us live and heard the new material. We've actually had some interesting requests from people wanting to use 'Sea Of Regrets' in films. Everything else seems to be falling into place really nicely except getting a label to actually put the record out.

What I've heard of the new songs, on the surface they seem more accessible - not necessarily radio-friendly - than your previous material.
Guy: Accessible is definitely a word I'd use. Its kind of a conscious decision that the newer songs sound the way they do, in the same way that 'Elegies To Lessons Learnt' was intended to sound the way it did. It was always going to be a darkly themed album.
David:.whereas the new record, while still having its bleak side, is engulfed in a few rays of shining light.

So are all the new songs recorded?
David: They are, yes. There are just a few mixes that need to be re-assessed and then the record is pretty much ready to go. We recorded it all earlier this year in a cottage in North Yorkshire and produced them ourselves.
Guy: We always self-produce our records. For us it's just an added part of the writing and recording process. We know then that we're totally in control of it. We try to make our records sound as organic and near to our live shows as possible, and for the most part, I think we've achieved that.

Did losing the fifth member of the band, Ashley Dean change the band's musical direction in any way?
David: No I wouldn't say that.
Guy: Ash leaving was in the best interests of both parties really. It was never really a plan of his to be in a band anyway - he's always wanted to be a filmmaker. It was just something that happened.
David: I think we all felt that the time was right for us to make a big change, and I know that he sees it as a positive step forward for him. It was all very amicable.
Guy: Yeah, we're all still really good friends, and very supportive of each other's chosen direction of work.

I know Ashley was responsible for the visual part of your live show. Will you still be using them on your forthcoming UK tour in October?
David: We haven't really used them for a while now. It's not something I've given much thought to.
Guy: There may be some kind of visual backdrop, hopefully tied in with the new record, but at the moment we're just concentrating on the songs really.

Did you ever worry that the uniforms and visuals would see people perceive you as some kind of gimmick band?
David: I don't know. I'd hope it would have the opposite effect to be honest, as I don't think there are many other bands that've spent as much time putting the kind of thought and effort into the whole presentation of the band as we did. We still do to be fair, and that's why I think there's plenty of content in there without the need for visuals such as slideshows as well. I mean, I'd never write it out of the equation completely but I know a lot of people found it almost like an information overload.
Guy: Gimmicks? Maybe, but I think there's more than enough substance in there to eradicate that.

So aside from getting the new record out, are there any other unfulfilled ambitions you have as iLiKETRAiNS, such as playing ATP for example.?
Guy: That would be amazing in one sense, although I'm not sure if what we do really fits in with that whole crowd either. I mean, ATP has a really DIY ethic, and as much as I love most of the bands who play there, I don't really see us in the same light.

What if you were asked to curate an ATP? Who would you choose, yourselves included of course.?
Guy: Wild Beasts would be there. I'd have to have Nick Cave playing in one form or another as well.
David: Low.
Guy: PJ Harvey too.
David: Radiohead would probably be too big to play ATP wouldn't they? I'd ask Jonny Greenwood to do a solo set instead then.
Guy: And if Nick Cave's coming we'd might as well have the Dirty Three.
David: Sigur Ros maybe? I haven't seen them live in ages. I'd also take Mew.
Guy: I'd have Steve Reich doing something really unusual like playing drums just to top it all off!

Finally, if there's one thing that you could change about iLiKETRAiNS what would it be?
Guy: If we started again I wouldn't want us to be called iLiKETRAiNS. I think people read it and it scares them off. And also, a lot of the songs we've written so far have been about the sea rather than trains, so maybe we should go under a maritime name!
David: I'd like us to be selling lots and lots of records!