'The Raid 2' is in cinemas this weekend - and it's worth a watch.

Among the smorgasbord of movies on offer for cinemagoers this weekend is The Raid 2, Gareth Evans's sequel to the classic 2012 Indonesian martial-arts movie, Redemption. 'The Raid 2' Branches Out From The Original

The first effort followed Special Forces rookie Rama (Iko Uwais) who is instructed to hang back during a covert mission to extract a brutal crime lord from a rundown fifteen-story apartment block. It was a high octane thrill fest with genuinely ground-breaking fight scenes, masterfully directed by the Welsh filmmaker.

The Raid 2 picks up Rama's story, who is targeted by more powerful opponents after his successes in the tower block. Rama must go undercover in the criminal underworld and climb through the hierarchy to the corrupt politicians and police.

"All of this is choreographed with precision to cause the maximum amount of bone-cracking, head-smashing mayhem, which makes the battles more amusing than thrilling," wrote our very own Rich Cline.

"You sit, smeary-faced, as Evans exhausts one cold-blooded hoodlum confrontation after another - in prisons, in restaurants, on the subway. It is so expertly played, it never becomes stupid," wrote Antonia Quirke of the Financial Times.

More: Read our full review of The Raid 2

"Evans gives us another slice of spleen-splittingly, pelvis-dislodgingly, inner-ear-damagingly hardcore action. He lets rip with everything but subtlety," said Peter Bradshaw of The Guardian.

"Gareth Evans is throwing an impressive gauntlet down to his audience here. Someone's face is pulled apart by the teeth, while he screams. Think you can handle this?" said Tim Robey of The Telegraph.

"A bulkier, slower beast than Evans' first film. But when it enters combat mode, it's more raucously bloodthirsty than anything you've ever seen," said Nick De Semlyen of Empire magazine.

Should The Raid 2 perform as expected at the box-office, Sony executives will be only too happy to sign the cheques for a third movie. Something Evans has already begun planning.

"It will continue to expand, but in a different way," the director told Den of Book of a third movie, "If The Raid 2 starts two hours after the first film, [The Raid 3] will start three hours before The Raid 2 finishes. We'll go back in time a little, and then we'll branch off. So for me - without giving too much away - I want to try a different landscape."

More: Patrick Hughes to direct American remake of The Raid 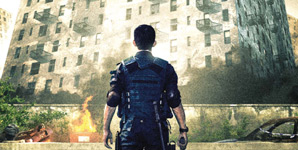