By Max Cussons in Music Reviews on 29 September 2017

While we recently praised and are still worshipping Iglooghost's last single 'Bug Thief', we're now here to talk about latest song 'White Gum' from upcoming album 'Neo Wax Bloom'. Frankly, the hype is more than justified; this kid is revolutionary with his mystical hyper beats, as further proven by this newest track.

The majority of Iglooghost's tracks show absolute mastery over both chaos and serenity, managing easily to balance the two. Nonetheless, 'White Gum' is pure fighting music. 233For starters, this track samples AJ Tracey's 'Naila'; a fairly animated grime song in itself with extra rapidity and high-pitched incoherence. It needs the speed in order to catch up with the lightning beats Iglooghost is firing out here.

These are Venetian Snares levels of speed and pummelling, except Iglooghost's textures are so bright and sugar coated it's like knife thrower wielding sharp dandelions. 'Naila' may reference the anime where people settle scores with card games ('swiping my card like Kaiba / using the traps like Yugi'), but it feels way more like a Dragonball Z or Naruto battle.

UK electronic artist Iglooghost has been one of the most game changing producers of recent times, maybe even thee most game changing. His EP's 'Chinese Nü Yr' and 'Little Grids' have established his sound as one that manages to be punchy, speedy as well as warm and adorable, with beats that carry a lot of rainbow dazzle, being put to adrenaline fuelled, all-over-the-place rhythms, as if you've been injected with actual adrenaline, that's somehow made out of ice cream. This makes Iglooghost's sound one that takes no sh*t, as much as it's one that is comforting. His songs have huge scope, but they also feel really intimate, giving you the best of many different approaches to music in just one package. He's just announced his debut full-length 'Neo Wax Bloom' and whilst we eagerly count the days until this drops (September 29th), we've got this new single 'Bug Thief' to give us an enchanting glimpse at what's in store for us.

Even in the delicate start of this track, there's so much going on already with the glacial piano, and the mystical beats sweeping in, like they've just made the jump through hyperspace. Iglooghost's sound is so maximal that even in the more restrained moments, there's still so much going on for you to make heads or tails of. 'Bug Thief' does burst into many more sporadic beats, with the song maintaining it's warm, snuggly, soothing charm. This is why Iglooghost rules, he's able to bring such polar opposites together and not have one feel like the other is bending a knee to the other.

Like most Iglooghost tracks, 'Bug Thief', has kung-fu strength and agility with the beats being so rapid, thick and swinging, but because they're so colourful and have a fantastical feel to them with the soundscapes being so ethereal and windswept, you get the best of both worlds with this sound being something you can get your stomp on to (if you can keep up) as well as something you can stick on for when it comes to moments of reflection.

2017 is going to be Iglooghost's year. With just a handful of EP's such as 2015's 'Chinese Nü Yr'' and last year's 'Little Grids', the UK producer has already managed to craft a sound unlike anything you've ever heard before and years ahead of anything else in electronic music, maybe even music in general. With lush, colourful soundscapes, firm, muscular beats, fluttering rhythms, bizarre childlike vocals and a cinematic scope making for truly fun and enchanting listening. His as-of-yet-untitled debut album is due to come out in the coming months and all signs are pointing to it being a ripper. Iglooghost was kind enough to answer some questions for us about his upcoming album, the electronic scene and Pokémon.

Contact Music: Your debut album is due to come out this year. When can we expect it to come out and what can people expect from it?
Iglooghost: Yeah! I'm finishing off the last couple of tracks right now. It's really big and ancient and fast.

CM: Your EP's, singles and such have been highly regarded in the electronic scene. How does it feel to have had so much acclaim before even having an album out?
I: I don't really feel like I'm anything yet, but it's cool that a few people have caught on so early. I think after the LP I'll probably drop a million tracks on Soundcloud every week like the cool kids do.

By Max Cussons in Music Reviews on 19 October 2016

Iglooghost is nothing short of a prodigy. Despite not even being 20 years old yet, he's help carve a glimpse into what could well be the future of electronic music and with just a handful EP's and singles, the most notable being last year's 'Chinese Nü Yr.' With just the four tracks on that release, via Brainfeeder, Iglooghost created a fantastical world with vibrant and playful, yet tough and sporadic beats that feels like Pixar made a film about raves. This year he's released the equally eccentric 'Little Grids' EP and the epic, 40 minute, classical song '? ? ? Snoring (Music To Sleep To)' which is worthy of being a film soundtrack, it's so beautiful and adventurous. The electronic world waits with baited breath for a full length album and tonight in London he gives every reason to believe that it's going to be worth the wait, however long it takes to come out.

Before that though, Tre'bore kicks things off fittingly getting people dancing straight away with beats that switch up between hard and smooth, but always funky. Everyone has a blast, and it'd surely be the pinnacle of the night if it wasn't for who was following.

Iglooghost gets behind his gear and delivers a set full of the muscular playful beats he's known for. Iglooghost's music is so overjoyed that it ignites a wholly positive feeling within you, yet packs enough punch to make you move fiercely to it. People are bouncing around with looks of glee on their face whilst hyperactively moving every limb. 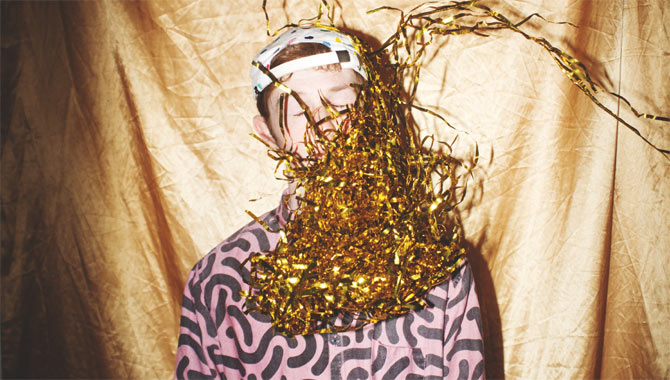