Iggy Azalea and Rita Ora team up on stage at Wireless Festival 2014. 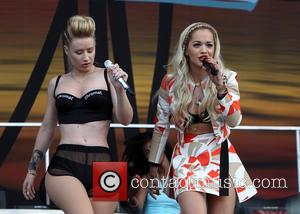 The pair were wearing very little for their surprise duet; Iggy showing off most of her bod in a black Chromat bralet with black underwear and mesh shorts, while Rita had unzipped her heavy print cropped jacket to reveal a simple black bra underneath (though she did at least cover up with a skirt on the bottom half).

The duo performed a much appreciated rendition of Iggy's latest single 'Black Widow' with her collaborator at the event; a song that was co-written by Katy Perry, Sarah Hudson, Benny Blanco and duo StarGate.

The track appeared on Iggy's US Rap Chart number one debut album 'The New Classic', released earlier this year and which also featured collaborations with Charli XCX, T.I., Mavado and Watch The Duck.